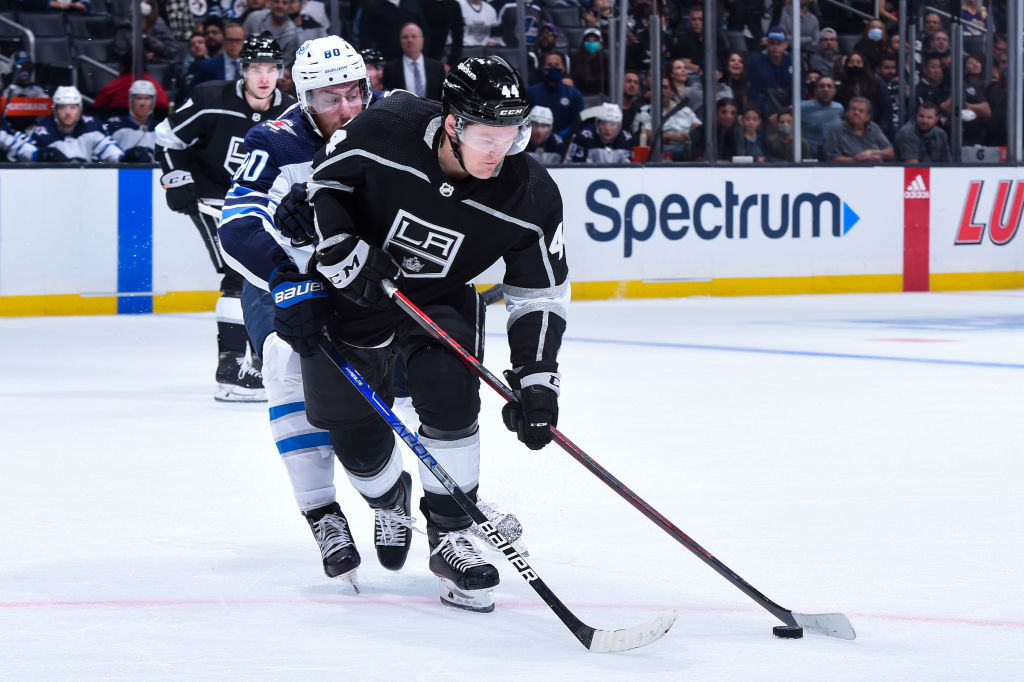 Good day to you, Insiders!

The LA Kings practiced this afternoon, but it certainly was not according to schedule.

The initial plan called for the team to travel to Winnipeg immediately after last night’s game, spend the night in Manitoba and practice at the home of the Jets in a mid-afternoon skate. The Kings, however, never got off the ground. Due to winter weather in Winnipeg, the team spent the night in Ottawa, skated this afternoon at Canadian Tire Centre and are now on their way across the country, scheduled to arrive in Winnipeg later on today.

Another night in Ottawa wasn’t originally in the cards, nor was another trip to the building that hosted the team for a 2-0 victory yesterday evening. What’s that saying about best-laid plans? Adaptability and versatility were the name of the game over the last 18 hours, as it’s been for the team on the ice during their current seven-game winning streak.

In some ways, last season prepared the Kings for what happened here this season. In March 2021, the Kings were in Colorado for a pair of games, before they were scheduled to return to Los Angeles to face St. Louis the following day. Weather, however, derailed that trip, with the Kings not touching down in California until when puck drop would have been, resulting in perhaps the only non-COVID cancellation of a game last season, by my unofficial count.

Snow problem, right? Enough about travel for today, though.

Nine paragraphs in and we haven’t even talked about the on-ice performance of a team on a seven-game winning streak? Cmon now……

The Kings added a new win to their arsenal yesterday evening. They’ve won in overtime. They’ve scored three goals on the power play. They’ve come from behind in the third period, and they’ve overcome blown third-period leads. Last night, they added shutout into the mix.

Jonathan Quick continued the stellar run of goaltending that the Kings have had thus far this season, as number 32 fittingly made 32 saves on 32 shots to pick up the 55th shutout of his NHL career. Quick overcame what looked to be a bit of a scary situation during the second period, as he was down for a short time after receiving contact to the head from Ottawa forward Tim Stutzle. After the game he said was “all good” after that collision. The only real question is whether he was referring to his health, or his play on the ice.

Quick’s efforts brought the Kings to fourth in the NHL in overall team save percentage. Quick himself is tied for sixth in the NHL at a .935 mark, with both he and Cal Petersen on top of their respective games throughout the course of this winning streak. Just two teams in the NHL have allowed fewer goals per game than LA’s 2.43, which is a reflection of both stellar goaltending and a commitment to playing a certain brand of hockey.

Todd McLellan on overcoming injuries to go on this run –

"It took us a little while to get through it and then we realized we have players that can play and we needed to play a certain way to some success. We’ve been able to repeat that night after night."

In the absence of several regulars, the Kings have committed to playing an effective brand of hockey. On a given night, McLellan has admitted that it might not be the prettiest style or the most exciting to watch style, but the Kings are checking their way to wins and they’ll take each and every one of them.

The attention for the group now turns to Winnipeg, where the Kings will look to avoid bookending a seven-game winning streak with losses against the Jets. Looking back to late-October, the last time the Kings lost a game was against Winnipeg, at STAPLES Center, in the first game of their most recent five-game homestand.

Tomorrow, the teams square off at Canadian Life Centre in Manitoba, the smallest barn in the NHL, though one with a propensity for an incredible atmosphere. In that aspect, an exciting trip awaits!

No formal line rushes today, though don’t read too much into that. With the circumstances surrounding today’s practice, line rushes were not a part of the drills run, so no cause for concern.

Regarding Lias Andersson – He skated once again, for the first time in a full-contact jersey. McLellan spoke a bit on Andersson’s status yesterday, noting that a stretch with four road games in six days makes it hard for Andersson to get a ton out of the practices, as he works his way back. Andersson is with the team here in Canada and has not been ruled out for tomorrow. McLellan indicated that with three days between tomorrow’s game versus Winnipeg and Wednesday’s tilt with Washington, perhaps it “sets up maybe for a Wednesday game at home”, though his presence in a white jersey was a welcomed sign. Until tomorrow we wait!

Regarding Viktor Arvidsson and Gabe Vilardi – McLellan indicated yesterday that “there are some forwards back in LA who are skating now, coming out of protocol.” They aren’t there yet, won’t play tomorrow in Winnipeg, but we’ll see how things shake out once the team returns to California.

Place In History
The current run marks the 12th time in franchise history that the LA Kings have won seven or more consecutive games. The team last achieved the feat during the 2019-20 season, with win number seven also coming over Ottawa, though that streak ended prematurely due to the eventual cancellation of the remainder of that season.

The Kings are not scheduled to hold a morning skate tomorrow in advance of the game against the Jets. The Ontario Reign play tonight in Tucson, as they look to extend their own winning streak, and then we’ll have a game preview, game thread and post-game update to come from the Peg!

By Zach Dooley
47 Comments
Behind the Scenes