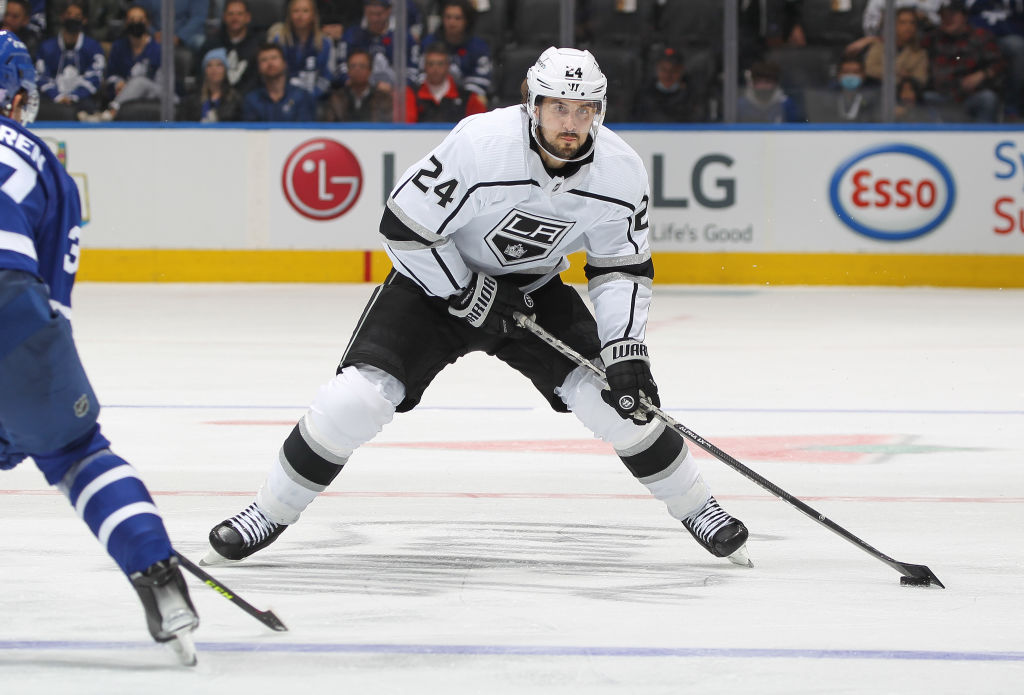 The LA Kings pushed their record to a game over .500 with their fifth consecutive victory, a 5-1 win over the Toronto Maple Leafs on Monday evening.

The Kings got two goals from Phillip Danault and multi-point games from his linemates Andreas Athanasiou (1-1-2) and Alex Iafallo (0-2-2) in the win. Jonathan Quick won for the third consecutive start, as he made 33 saves on 34 shots in goal.

The visitors stormed out of the gates in the first period, controlling 12 of the 18 shots on goal and scoring twice to take a 2-0 lead into the first intermission. First, forward Trevor Moore entered the zone with speed down the right wing, drove the net and finished on the glove side for his first of the season. Athanasiou then got in on the action with a speedy effort of his own, using his skating to gain a half step on his defenseman to the outside, before he crossed back to the middle and fired a shot inside the elbow of Toronto netminder Jack Campbell.

After Toronto got one back, a power-play tally from forward John Tavares, the Kings responded with a gritty goal of their own to re-take a two-goal lead into the second intermission. Forwards Iafallo and Danault worked below the goal line to win a puck back, before Athanasiou set up Danault at the back post for a goal that went off the skate, off the other skate and in. After a video review, the goal stood and the Kings led by a pair through 40 minutes.

The Kings got a late insurance tally from Danault, his second of the evening, to extend their lead to three goals late in the third period to put the game away. An empty-net goal from Adrian Kempe sealed the deal inside four minutes to play.

Hear from Danault, Athanasiou and Head Coach Todd McLellan after the game.

Everything seems to be paying off for Phillip Danault and the @LAKings @LAKings | #GoKingsGo pic.twitter.com/j0QK1rUX2N

On his goal in the first period
It was just a little scramble there at the blueline, Phil made a great, heads up play to give it to me and I kind of just kicked it up. It slid under the [defenseman]’s stick and caught him going on the far side. It just worked out.

On joining a line with Iafallo and Danault
They’re both great players. Any time you step in with guys like that, they’re very smart out there. You just go out, try and play your game, try not to do too much and build chemistry as quickly as you can.

On if he can see a difference between this and last season, after five straight wins
Definitely. Last season we had some real good points, and I think this season we’re a good team, we’re pretty underrated. I have a lot of confidence in this group and I think a lot of guys have a lot of confidence in how good we are. I think we just go out there, play our structure, stick to our game plan and we should be good for a lot of games.

On what he liked best about tonight’s game
The win. It’s a tough place to come and play, we’re playing against a very good hockey club. The start allowed us to weather the storm later, it got us the lead. We talked about it in between the second and third, we bent but we didn’t break at the end of the second, and we tried to re-establish our game in the third. Big penalty kill, we needed that in the third, I thought we shut them down after that.

On Blake Lizotte’s impact, especially on that kill in the third period
He doesn’t [get talked about a ton], yet he’s valuable because he’s quick, quick mind, quick feet, gets into different spots, he stays low and he can get in there and dig pucks out. He’s getting better at clearing, faceoffs are going up, all qualities that you need in a penalty killer.

On how he felt Kupari’s line dealt with the tough matchups against Matthews/Tavares tonight
I thought they did a real good job. Their big players didn’t go without chances, let’s face that, they had some, certainly in the second half of the game, they were big factors in their offense. The way it played out, they were really willing to play their third and fourth lines against our top two, and that opened up their skill for a lot of matchups against our third and fourth lines. That was a big test for them and they did a fairly good job.

On the play of Jonathan Quick tonight
He had a big impact, as he does almost every night when he plays. You don’t win in this league, I don’t think, without having good goaltending. Rarely do you leave the rink where you got terrible goaltending and you won a game, that doesn’t happen. The winning team often gets the best goaltending and Quickie was really good when he needed to be. Again, we talk about game management and I thought his ability to slow it down when we needed it, the freezes. We were up against a really good faceoff team tonight and I thought we did a really good job tonight in that area as well, so that certainly helped.

On the impact Andreas Athanasiou has had since joining the lineup
He’s gotten better and better, six periods now. You can see his speed and skill come out tonight, he’s dangerous when he’s 1-on-1 with a defenseman, or he has open ice. Great move on the goal, drew a penalty, a lot of real good things from that line and him in particular.

– Forward Alex Iafallo extended his scoring streak to six games, with a pair of assists in tonight’s win over Toronto. Iafallo now has 12 points from 12 games played this season.
– Forward Phillip Danault collected his first multi-goal game as a member of the LA Kings with two goals in tonight’s victory. Danault led all skaters with seven shots on goal, a season high.
– Goaltender Jonathan Quick made 33 saves on 34 shots in the win, as he earned the victory for his third consecutive start. Quick now has a .924 save percentage and a 2.26 goals against average on the season.
– Forwards Trevor Moore and Andreas Athanasiou scored their first goals of the season in tonight’s first period.
– Anze Kopitar (12-of-18), Danault (9-of-14) and Blake Lizotte (6-of-8) were all over 50 percent in the faceoff dot tonight, while Rasmus Kupari was exactly even (5-of-10).
– Defenseman Mikey Anderson led all defensemen with 22:05 in time on ice tonight.

The Kings are set to travel to Montreal tonight, in advance of tomorrow’s game against the Canadiens. The team is not scheduled to skate in the morning prior to the game.