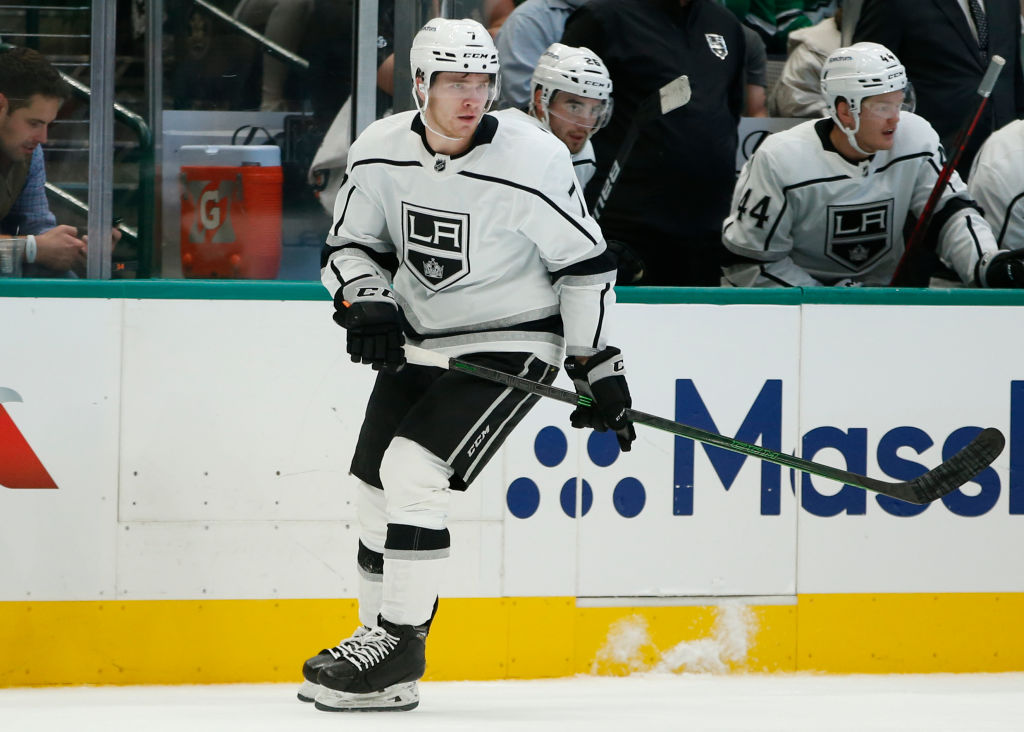 At least, good afternoon, to Insiders on California time! We’re North of the border here in Toronto in advance of tomorrow’s game against the Maple Leafs, approaching a good evening type of greeting.

The Kings hit the ice for practice today at Coca Cola Coliseum, home of the Toronto Marlies. As someone who worked in the AHL’s North Division from 2013 – 2015, I’ve seen several games (online) played in this building. Between the Utica Comets and Adirondack Flames, it felt like every other week with the scheduling in that league……but I digress.

The Kings traveled with 23 skaters here to Ontario, including forward Lias Andersson, as confirmed by Todd McLellan. Andersson did skate today in a non-contact jersey, which leaves the Kings with 14 forwards, seven defensemen and two goaltenders. Andersson is currently “questionable” for tomorrow night. Here’s how the Kings lined up for practice today –

Midway through Friday’s win over New Jersey, the Kings shuffled their lines, moving Adrian Kempe up to the top unit to skate with Kopitar and Brown, while also bumping Andreas Athanasiou to the second line with Danault and Iafallo.

Overall, the changes saw some success. Athanasiou was making his season debut and collected an assist on Arthur Kaliyev’s game-winning goal, though that goal came on the power play. Kempe scored the game’s first goal, late in the second period, off of assists by Brown and Kopitar. Early in the game, Kopitar’s line was -3 in terms of shot attempts, with that rising to +3 after adding Kempe. The second line, centered by Phillip Danault, was -4 before the changes and even after. Good, in-game adjustments that helped earn the victory.

“It was team-oriented,” Todd McLellan said of the changes. “It wasn’t who was or wasn’t doing anything, we just didn’t have a lot of speed or pace in the first period, I thought we were the slower team. We just tried to inject a little speed in with Kopi’s group, and then Lizzo and Lemieux provided speed already, on their line, so we wanted to spread it out.”

Regarding Athanasiou, there was no easing him back in, that’s for sure. McLellan had no reservations about elevating his role during the game, bringing his speed and puckhandling abilities to the second unit, increasing his ice time in the process. After today’s practice, McLellan highlighted Athanasiou’s return to the fray and the impact his skating ability has on his ease back into things.

“Tough situation for him to come into,” McLellan said. “He missed the last game of last season, he didn’t get to skate a lot in the summer with his teammates for whatever reason and first actual team skate of training camp he breaks his finger. He’s coming from behind, he’s trying to play catchup and that’s a hard thing to do, although if anyone can do it, it’s him. He’s got a good engine, he’s got great legs, he’s got a skill game that should come back fairly quick. I spent some time with him today, talked about it, he said it was happening fast. He felt better as the game went on, I think we’ll get that answer from him for a few more games and then he should be up and running.”

Bjorn To Be Aggressive
McLellan had plenty to say about defenseman Tobias Bjornfot after today’s practice, and the noticeable strides his young defenseman has made over the last handful of games. Perhaps as much as any other on the blueline, Bjornfot has taken a step up in terms of aggressiveness and assertive play, using the qualities he has in a more noticeable way.

Bjornfot has always been a strong skater. He’s always had it in him to do the things that he’s doing now. Now, he’s got that mindset now down.

“You should be [noticing them more], because that was part of the conversation,” McLellan said. “He has good legs. It’s there, you’ve got to use them. Early on in the year, I’m not sure that he was prepared to hit the gas. Now, he’s prepared to hit it, both offensively and defensively.”

Bjornfot has partnered with another young blueliner, Mikey Anderson, to form an effective, two-way pairing for the Kings. McLellan referenced today a conversation that Bjornfot had with Trent Yawney, a moment that Bjornot himself talked about last week.

In that meeting, Yawney encouraged Bjornfot to play more aggressively, to use his tools to assert his game. The fact that we’re seeing these things in action now speaks to both Yawney’s influence as a coach, his ability to connect with younger players, and Bjornfot’s willingness to listen and learn. All good signs.

“It shows the type of relationship that Yawns has with the defensemen,” McLellan said. “They trust him, when he does go to them, he’s there to help. I think the players feel that, so credit to Trent and to the d-men. For a young player to take the guidance, and apply it right away, is also a good sign. It shows that he’s maturing and he’s open to guidance. That’s a great thing for a young player.”

The common theme here has been aggression, which McLellan went on to define as it relates to Bjornfot. It’s not necessarily about something physical, or in your face, but rather using the things that makes Bjornfot effective and applying them throughout the game.

“When we use that word, it’s not about running around and hitting guys, it’s about using your legs, your mind, your hands to get in position, both defensively and offensively,” McLellan clarified. “He’s done a real good job of that.”

Calder Carl
Lastly, hear from forward Carl Grundstrom, who returned to Coca Cola Coliseum, home of the Toronto Marlies, this morning for the first time since he called that rink his own back in 2018.

Grundstrom, a second-round selection by Toronto, was a part of the Jake Muzzin trade, that sent Grundstrom, defenseman Sean Durzi and a first-round selection that became Bjornfot back to the Kings. Grundstrom left Toronto with fond memories – including a Calder Cup championship with the Marlies in 2018 – and also touched on a couple of other items, including his insertion into the lineup last weekend against Buffalo. Grundstrom was the recipient of a game after Viktor Arvidsson left shortly after warmups and was placed in COVID protocol. 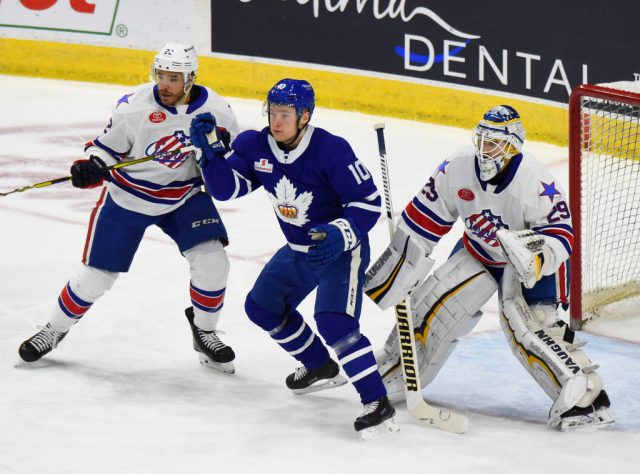 TORONTO, ON – JANUARY 12: Carl Grundstrom #10 of the Toronto Marlies battles with Zach Redmond #22 and Scott Wedgewood #29 of the Rochester Americans on January 12, 2019 at Coca-Cola Coliseum in Toronto, Ontario, Canada. (Photo by Graig Abel/Getty Images)

By Zach Dooley
16 Comments
Behind the Scenes