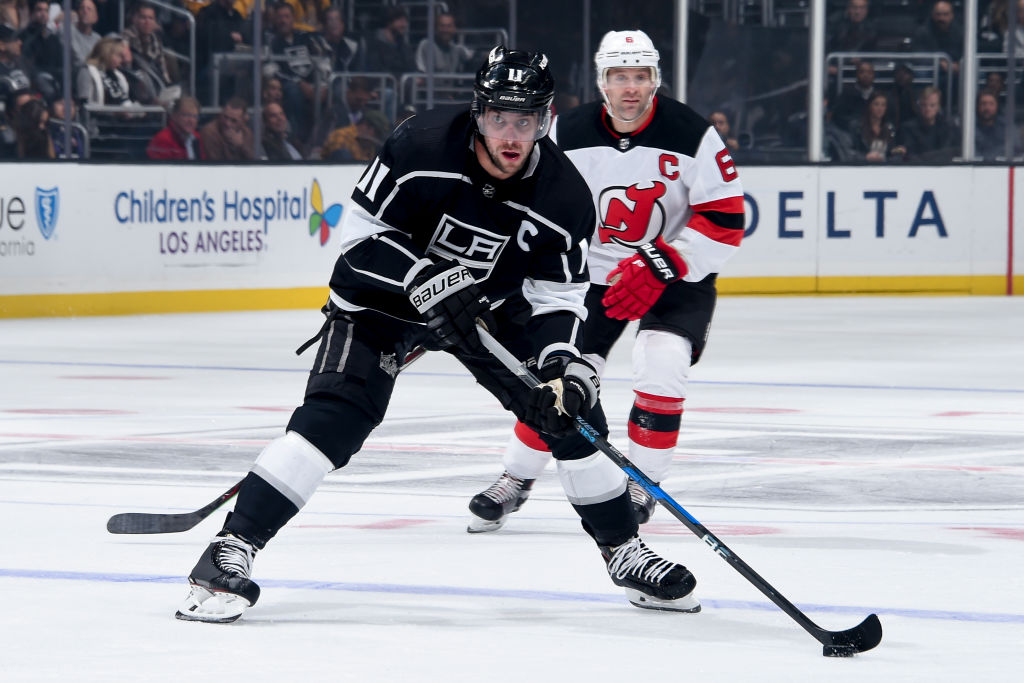 TONIGHT’S MATCHUP: The LA Kings have already earned a winning record on their current homestand and they look to tack on another victory in the finale this evening against New Jersey,

HEAD-TO-HEAD: The Kings and Devils traded low-scoring wins during the 2019-20 season, with New Jersey winning 3-0 at home and LA winning 2-1 in overtime at STAPLES Center. Defenseman Mikey Anderson made his NHL debut in the latter, while forward Dustin Brown had two points (1-1-2) and Adrian Kempe netted the game-winning goal. The Kings projected lineup tonight has just eight of the 18 skaters who featured when the teams last met 21 months ago.

KINGS VITALS: It’s a homestand finale tonight for the LA Kings, who carry a 3-1-0 record from the first four games. The Kings have won three straight, extended with a roller-coaster, 3-2 shootout win over St. Louis on Wednesday evening at STAPLES Center.

Goaltender Cal Petersen was the first off this morning for the Kings, making him tonight’s projected starter. Petersen has one career start against the Devils, as he made 31 saves on 34 shots in the 3-0 defeat in Newark during the 2019-20 season. Throughout his NHL career, Petersen is 3-1-1 against the Eastern Conference, with a .930 save percentage and a 2.32 goals against average.

Regarding the skaters, Todd McLellan confirmed with us yesterday that the plan was for Andreas Athanasiou to make his season debut this evening, replacing forward Lias Andersson. Andersson was ruled out for today’s game, with Athanasiou the personnel replacement, and some shuffling amongst the lines. Further on Andersson, he is expected to make the upcoming road trip, and is “questionable” for the games against Toronto and Montreal.

Also an option for today is forward TJ Tynan, who was recalled this morning from AHL-Ontario. Tynan was the extra forward during line rushes during morning skate. More on Tynan is available HERE.

The expectation with the defensemen is that we’ll see the same group that has played for the last three games, all victories. With all of that in mind, here’s how the lineup shook out during rushes –

DEVILS VITALS: The Devils are off to a solid start to the 2021-22 season, at 4-3-1, but are currently competing in the toughest division in the NHL in the Metropolitan. With that, New Jersey currently places eighth of the eight teams in that division, despite a .563 winning percentage.

There is no report, at this time, on a starting goaltender tonight for the Devils. Former King Jonathan Bernier was in goal during the team’s loss in Anaheim earlier this week, while Mackenzie Blackwood was activated from injured reserve on Tuesday.

Per Amanda Stein of the Devils team website, New Jersey appeared to take an optional team skate this morning. For reference, here’s how the visitors lined up during their last game in Anaheim –

Yesterday, Devils Head Coach Lindy Ruff ruled out his top defensemen, Dougie Hamilton, though today he seemed to not close the door on Hamilton’s involvement. Hamilton is currently day-to-day with a lower-body injury and is not expected in the lineup against the Kings. Additionally, forward Alexander Holtz could be in line for his NHL debut, after he was recalled from AHL-Utica earlier this week.

On Dougie Hamilton, #NJDevils Lindy Ruff says "He's day-to-day…. The fact that he's able to get back on the ice today puts him in a good place for us."

He will get a report from trainers after today’s optional skate for more on how Dougie is doing.

AK with AK
Line rushes this morning gave us the indication, confirmed by Todd McLellan during his morning availability, that Arthur Kaliyev will skate with Anze Kopitar and Dustin Brown on the team’s first line tonight against New Jersey.

This will be the second time we’ve seen that combination, though the first was on the second half of a back-to-back set, with McLellan admitting that Kaliyev didn’t quite have the engine to handle that role just yet, in that situation. Without a game the night before, the Kings are eager to see how their young forward responds.

“He’s going to play with Kopi again tonight,” McLellan said. “We’re not playing back-to-back games, so we’re going to check his engine and see if he can maintain the pace up there. We’re working with him as a young player, to make sure that he’s as confident as he can be and try not to give any of the confidence back and try not to put a lot of pressure on him to be the guy.”

Kaliyev is such a unique player, and finding the proper way to utilize him, and make him successful, will be a priority for McLellan and his staff.

Through 40+ minutes against St. Louis, we didn’t notice Kaliyev a ton, good or bad. As McLellan has repeatedly said, Kaliyev has not hurt the team defensively. In one moment, though, he was able to change the game by using his unique gift – his shot. It took, what, a five-second span for Kaliyev to receive a pass with momentum, walk into a dangerous area and fire one home? McLellan spoke about the internal effort to not heap too much pressure on a young player, while also looking ahead at what he can hopefully one day become.

“We’re not talking to him about those moments,” McLellan explained. “I think when it’s on his tape, and he has a chance to shoot it, he has as good of a chance of putting it in the net as anybody on our team. To do that relatively young in his career, that’s a real good thing. Can he eventually be a game-breaker for us? We’re hoping for that and I know he’s hoping for that, but it’s way too much pressure to put on him right now. Let him play and keep on going.”

So far this season, while the short trial against Buffalo didn’t quite work as expected, Kaliyev has an expected goals percentage of nearly 75 percent when playing with Kopitar at 5-on-5. Seeing how those two, along with Brown, shake out tonight will be an exciting storyline to follow.

Kale Salad
It’s been a nice start to the season for Kale Clague.

Clague has stepped into the lineup over the last three games and has a point in each of them, all primary assists. We know that Clague is a smooth skater who handles pucks well, makes crisp passes and keeps things moving at the offensive end of the ice. His head coach believes he’s used those well thus far, while holding his own defensively.

“His strength, his assets have always been with the puck,” McLellan said. “He’s been able to make good reads, good plays. He has real good legs, it was a big test for him the other night against St. Louis, obviously a bigger team, more physical around the net, and I thought he passed that. He seems to be gaining more and more confidence, a lot of that is due to his play and the minutes he’s playing, he feels pretty good in those minutes. He’s got a good engine, he can play those minutes, he’s positionally sound and I think you’ve got to be happy.”

As McLellan indicated, the St. Louis game presented a unique challenge for Clague. St. Louis is a hard and heavy team, especially around the net, and with Clague being an undersized defenseman, by his own label, there are challenges that come with that.

For his part, Clague was also happy with how he handled the added challenge of facing a team like St. Louis, another positive step forward for the 23-year-old blueliner.

“For myself, being a bit of an undersized defenseman, I definitely noticed how big and heavy they were,” he said. “I just tried to be smart with my stick and my body positioning, get in the way. I’m not going to outmuscle anyone down low, or anything like that, so I just wanted to get in the way and try to separate the puck as much as I can, using my legs and my stick. I thought I did a fine job.”

At the other end, it’s the offensive talents, gifts and production that Clague is being looked at to provide. Thus far, he’s done that for the Kings. Quarterbacking the first power-play unit, Clague has seamlessly integrated himself with those players, collecting a pair of primary assists on the man advantage already this season.

Everyone on a power-play unit has a unique role. It’s about the collective at the end of the day, scoring goals, but that only happens if everyone is doing their job. Clague highlighted a few areas, but focused on his main job, which is distribution.

“Clean breakouts, I’ve got to be the one to bring it up with speed and push them back on the entries, and just distributing the puck,” Clague said. “Last game, I had a few more shots on goal form the top, which is good, it creates a little bit of chaos off of rebounds, but I think my main job is to distribute. You look at the main guys on the point, Kemps and Kopi, those are two amazing players. It’s pretty easy to get them the puck and let them do all the work.”

Clague, Kaliyev and the Kings are back at it this evening in DTLA. Puck drop is back at 7:30 PM from STAPLES Center!