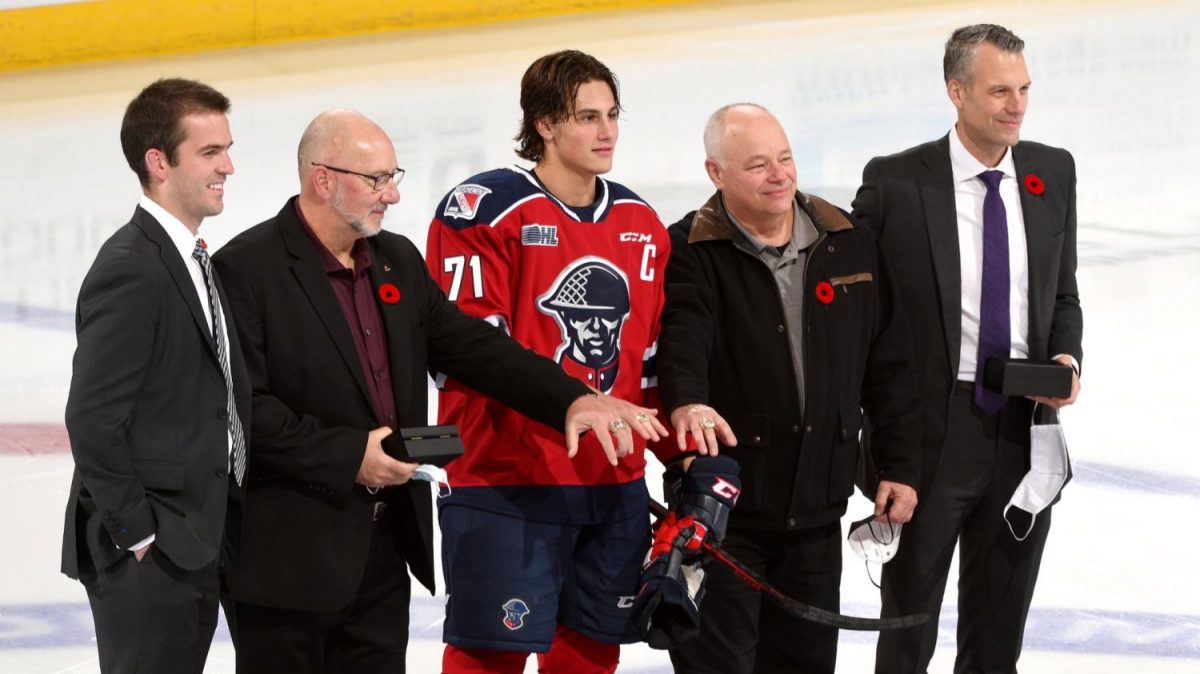 When the Kings drafted Francesco Pinelli with the 42nd pick in the 2021 NHL Draft, they didn’t just select a bright hockey player with a promising future, but also a mature, beyond-his-years individual. Pinelli, a “lead by example” type, now has the chance every player dreams of as the Stoney Creek, Ontario native has been named the captain of the Kitchener Rangers of the OHL.

“I was very honored and very excited to take that responsibility on with the Kitchener Rangers,” Pinelli told LAKingsInsider.

McKenzie felt the time was right for Pinelli to wear the letter for his team. He understands the responsibility it puts on a young player, and believes his big gun offensively was ready for the opportunity.

“[Francesco] leads by example,” he said. “He’s not the loudest guy in the room and he’s not a ‘rah-rah’ guy, but he does things the right way day in and day out. He’s a good example for younger players to look up to and say, ‘that’s someone I want to model my work ethic or practice habits after.’ I think he commands a lot of respect in the room for the type of player he is and how good of a player he is. On most nights, he needs to be our best player if we’re going to be successful. Being captain is a big responsibility for an 18-year-old and you usually don’t see someone that young being named captain, but we felt he was ready for it.”

Entering the 2021-22 season, Pinelli had only suited up for the Rangers 59 times due to the cancellation of last year’s OHL season. The significance of that loomed large because that meant the last time that Kitchener had seen Pinelli play for the organization, he was just 16 years old.

In his first season at the OHL, with 41 points (18-23-41) in that rookie season, McKenzie and the Kitchener staff knew Pinelli wasn’t just your average player. To produce at that level as a young player was impressive, and the staff took notice early.

“The first thing [in 2019-20] I noticed about Francesco is that he had the ability to be a special player,” McKenzie said. “A guy that young, usually you don’t expect huge things from him in his first year in the OHL, but, right away we could tell he was going to be a really good player. He stepped in pretty seamlessly and played on our top couple of lines with the older players and fit in really well. Off the ice, he was really mature and pretty professional for a 16-year-old and had really good habits off the ice. It’s not often that you see a guy come in at that age that’s that dialed in on and office the ice.” 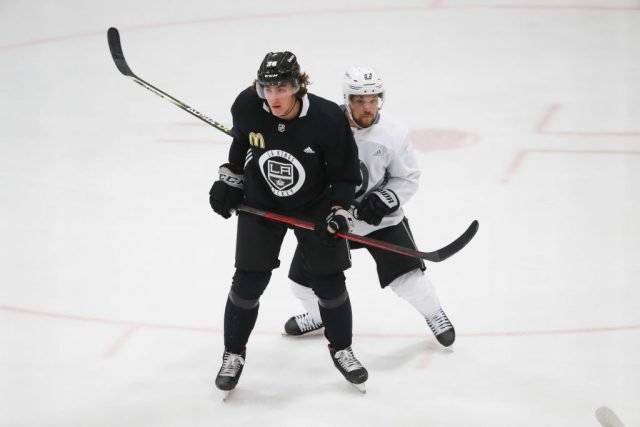 While the “C” may be new to Pinelli’s chest, being a leader is not.

“I’ve always been a leader my whole life and try to lead by example,” the left-handed center explained. “I like to speak up when it has to be done, but I’m also very focused on the task at hand.”

And focused he is – Focusing on learning how to become a better player and leader. After being selected by the Kings this past summer, Pinelli flew to LA for development camp, the rookie showcase in Arizona and training camp. During that time, Pinelli was able to learn about his game and learn how to lead. He experienced his first taste of NHL preseason action, wearing the Kings jersey for the first time.

With the fortune of being able to meet and spend some time around Kings captain Anze Kopitar and former Kings captain Dustin Brown, Pinelli was able to learn what it means to be a good captain and leader.

“[Kopitar and Brown] are incredible leaders, you can just see that,” Pinelli said. “You’ve got an 18-year-old kid coming into training camp and you’d think they’d just brush you away because they’re Stanley Cup champions, they’re older and much more experienced than me. But no, they come up to you, talk to you and they’re great guys and it’s really impressive to see how well they treated everyone. [They] come to the rink and they’re just so dialed in. On the ice, they’re doing everything properly and pay so much attention to the little details. They limit their mistakes in their games which I find incredible and that’s what I really try to do too, minimize mistakes and make the right plays at the right time.”

With an in-person demonstration of what it means to be a good leader and captain, combined with Pinelli’s maturation, the Kitchener Rangers have been welcomed with a determined and motivated LA Kings draft pick.

Like his fellow prospect and development camp teammate Martin Chromiak, Pinelli too slipped in the draft beyond his expected draft position and landed in the middle of the second round. Projected as a mid-to-late first-round selection, Pinelli was forced to wait until day two to hear his name. Fortunately for Kings fans, it was called by General Manager Rob Blake.

“I definitely use the draft as motivation,” Pinelli said. “When I think about how the draft played out, it doesn’t affect me honestly, it just motivates me. I see scouts in the stands and I just want to prove them wrong. Obviously, I was very disappointed, but I also landed in one of the best organizations in the league, so it can’t get any better than that. I’m just going to continue working hard, that’s all I can control.”

Pinelli’s maturation is evident, beyond just a few media calls and an interview over the phone. For his Head Coach, it’s also been evident in person. McKenzie, when asked to describe who his captain is off the ice in one word went with “mature.” He also used it to describe Pinelli’s game on the ice.

“Pinelli is leaps and bounds ahead of where he was when he was last with us and his game is much more mature, especially on the defensive side of the puck,” McKenzie said. “He’s much more responsible. From the offensive side, he’s pretty dynamic and pretty tough to stop when he’s on his game. He does some special things with the puck and makes some special plays to show his skill and hockey sense. He’s definitely come a long way since he was 16, but we knew he had that ability and we’re not surprised by it to be honest.”

Taking what he has learned on and off the ice from Kings organization earlier this year, Pinelli now looks to lead an OHL team to the promise land.

Pinelli’s start to the season would have many believing he is doing just as he talked about. Through nine appearances, Pinelli has recorded 11 points (3-8-11), including a four-assist game in a 6-4 win over the Windsor Spitfires last weekend, helping his team to a 6-4-0 record to begin the season.

“My goals for the season are to be the most consistent player and come to every game prepared as a player and make sure we’re dialed in as a team,” he said. “For the team, it’s about winning as many games as we can. I know we’ve got a really good team here and I think we can do some damage.” 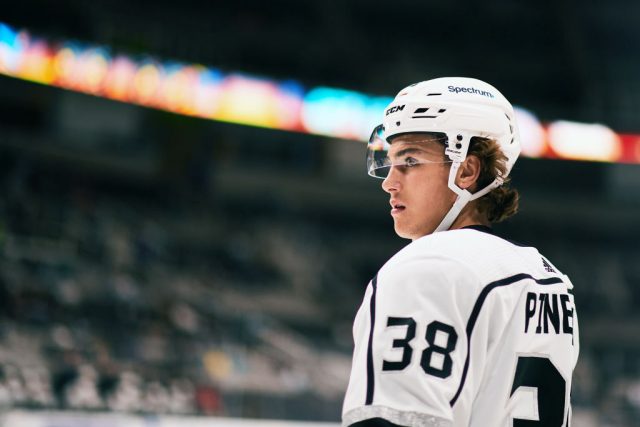 By Zach Dooley
349 Comments
Looking to the Future