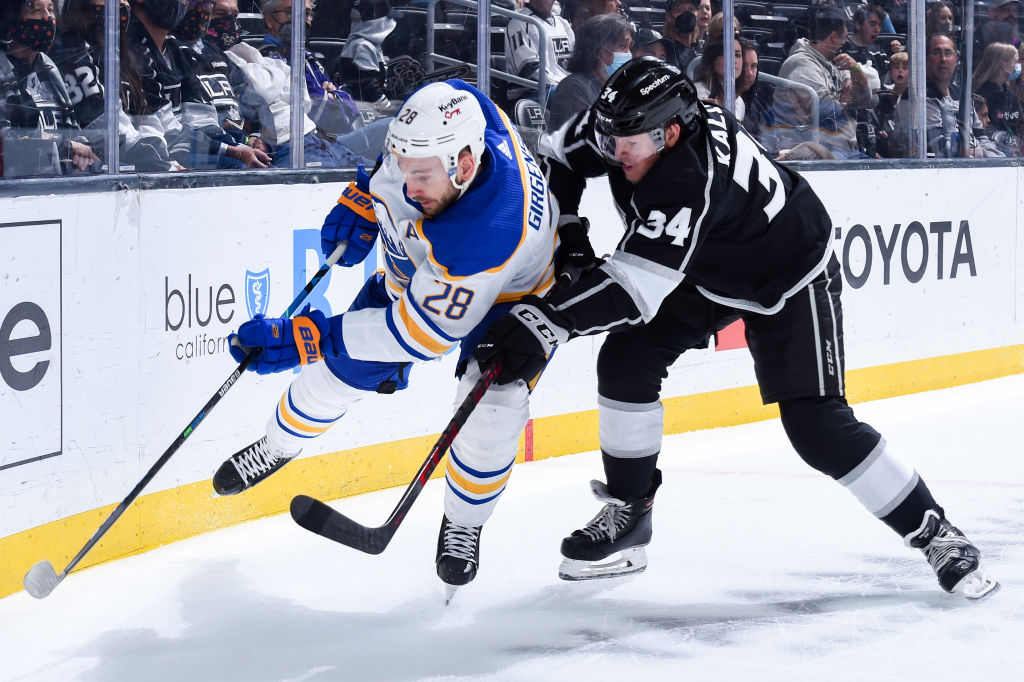 The LA Kings made it back-to-back wins this weekend at STAPLES Center, using a comeback effort in the third period to take a 3-2 victory over the Buffalo Sabres.

Defenseman Tobias Bjornfot collected two assists in the victory, including the primary helper on the game-winning goal, while goaltender Jonathan Quick made 22 saves on 24 shots to earn his first win of the season.

After a first period that did not feature a goal, Buffalo scored the game’s first two, as it opened up a 2-0 lead early in the second period. First, with the Kings on the man advantage, forward Rasmus Asplund went the other way shorthanded and beat Quick on a breakaway for his fifth goal of the season. A turnover by the Kings at the offensive blueline then led to a 2-on-0 for the Sabres, finished by forward Victor Olofsson, to bring the Buffalo advantage to two.

A late addition to the lineup, Carl Grundstrom, pulled the Kings back to within a goal exactly 60 seconds after Olofsson’s tally. Grundstrom took a feed through the neutral zone from Anze Kopitar, drove the net with speed down the right flank, and scored on his second effort to get the hosts on the board. Grundstrom’s goal was his second of the season.

The Kings battled back with two goals in the third period to take both the frame and the game. First, Kopitar wired a power-play goal past a Dustin Brown screen to tie the game at two early in the final period, giving the team power-play goals in consecutive days. Iafallo then stayed hot, as he drove the net to bury a centering feed from Bjornfot to give the hosts the game-winining goal. Iafallo has a point in three straight games.

Note that forwards Viktor Arvidsson and Gabe Vilardi were placed in COVID-19 Protocol just prior to the game and were not available this afternoon. Grundstrom, who scored, was added into the lineup after warmups.

Hear from Adrian Kempe, Bjornfot and Todd McLellan from after today’s win.

On blocking the shot that led to the first Kings goal
I’m fine. It was nice for Grunny to get a goal there, but yeah I’m fine. Huge comeback here tonight.

On the team’s energy in tonight’s comeback win
I think we built off of what we did yesterday and we played really well today. Buffalo is a good team and that’s a huge win today.

On being more comfortable and noticeable offensively
I’m trying to join the rush as much as I can and trying to just play my game. [The coaches] have said to me, “be a more offensive threat” and play your game, use your skating. That’s what I’m trying to do.

On gaining momentum from the Grundstrom goal
When you score goals, you get momentum throughout the whole team. Everyone gets buzzing, everyone was pumped there and we tried to come back from there.

On gaining momentum from the Grundstrom goal
We know each other pretty well. We played together with the Reign, so we know each other and we’re just trying to help each other out there. [Q: Who talks more on the ice, Mikey or Drew?] Mikey talks a lot out there, but Drew is Drew.

On the determination and grit shown coming back to win in that situation
Well, to answer with a negative part first, that shoe has been on the other foot, where we’ve been ahead by a goal and we didn’t come out of it with a win. To do it coming from behind and to get the win, I think it means a lot to our group right now. I thought, yesterday, we were able to play and turn the feel around the team. We talked about this being the game where we could come out of what we were in, by putting back-to-back games together. So far, so good.

On the maturity and growth in Tobias Bjornfot’s game as of late
We talked about Toby’s game getting better, night after night, and him using his legs. Early in the year, he played in between, he was just about there but not all the way there. Tonight, even last night, a few games ago, Trent Yawney talked to him and said get aggressive, get going, and we saw that from him. Great legs, both offensively and defensively, good for him.

On the Bjornfot – Anderson pairing
They’re defense-first defensemen. They check, they’re pretty good positionally. We’re asking Mikey to play on the off side, which is an adjustment, but as a pair, they are responsible on the back-side of the puck first, and their risk-reward attempts are limited. You saw Toby tonight, when it was time to go and there was a reward there for him, he chose the right time. They’ve been, I don’t want to say safe, because that’s not how we want to play, but playing smart.

On if he believes that Alex Iafallo can be a 25-30 goal scorer
Yupp, I think he can. If you haven’t figured it out already, I think this guy is a tremendous player. Tremendous player. Everybody wants to keep taking something away from him…I don’t give a [crap] about any of that stuff. This guy is a good player and that’s why I think he can score 25 or 30. He slows the game down when he needs to, he’s in the right spot, he speeds it up when he needs to, he can check, he comes to the bench, he sits down, he gathers his thoughts and he goes and does it again. Low maintenance, high production, I think he can score 30.

On if the situations the team went through last year prepared them for the protocol situation with Arvidsson
Yeah, last year got us ready for this year when it comes to that. It was Game 1 last year, we didn’t have three players, and it was like holy what just happened. Are they going to be okay, who’s playing, it was a jolt. Today, losing a player after warmups was a bit of a jolt, but it was handled well by everybody. We reacted properly and it’s why we have two extra guys taking warmups right now. It may seem odd, but you never know when you’re going to get that call.

– Anze Kopitar (1-1-2) scored the 100th career power-play goal of his career. He is the sixth Kings player to reach the 100-goal plateau. Kopitar’s 13 points (7-6-13) this season are currently tied for fourth in the NHL amongst all skaters.
– Kopitar also led all skaters with 24:18 in time on ice. That’s Kopitar’s highest TOI this season, and his highest overall since March 31, 2021.
– Alex Iafallo (1-0-1) extended his point-streak to three games with tonight’s game-winning goal. The GWG was his first of the season and the ninth of his NHL career.
– With a pair of assists tonight, defenseman Tobias Bjornfot collected the first multi-point game of his NHL career, while logging his first points of the season.
– Adrian Kempe (0-2-2) also had two assists tonight as he tallied his first multi-point game of the season and tied his career-high for assists in a game.
– Kale Clague has recorded power-play assists in back-to-back games.

The Kings have a scheduled off day tomorrow, before returning to the ice on Tuesday at 11 AM at Toyota Sports Performance Center.