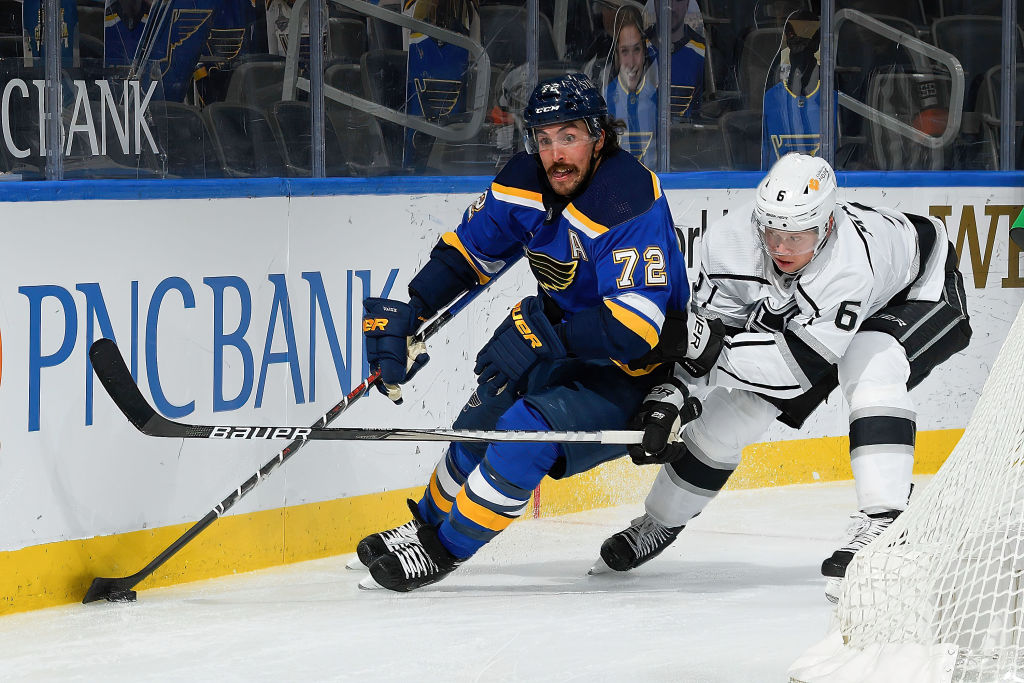 TONIGHT’S MATCHUP: It’s the first back-to-back of the season for the LA Kings, with a matchup against the St. Louis Blues on the horizon later this evening. The Kings will play the Blues both tonight and Monday in St. Louis.

HEAD-TO-HEAD: The Kings found their fair share of success last season against the Blues, going 3-1-0 in St. Louis, and 5-1-2 overall against the Blues. LA enters tonight’s action on a three-game winning streak at Enterprise Center, including a sweep during a back-to-back set this past February. Forward Dustin Brown tallied five goals from eight games against the Blues, while Anze Kopitar led all scorers with ten points (4-6-10).

KINGS VITALS: With no morning skate in advance of tonight’s game, we didn’t get a first-hand look at potential lines for this evening, though we can expect to see a pre-determined change between the pipes.

Todd McLellan confirmed with us yesterday that the plan was to split the back-to-back set between Jonathan Quick and Cal Petersen, with Quick going last night in Dallas and Petersen following tonight in St. Louis. Petersen posted a .921 save percentage from five starts against the Blues a season ago, a number that grows to .935 in his NHL career. The Iowan is 3-1-2 all-time versus St. Louis, with his most recent trip to Missouri a 35-save effort in a 2-1 victory.

The obvious question entering this morning is the status of Drew Doughty, who was the recipient of a leg-on-leg check during the second period of last night’s game in Dallas. McLellan confirmed with us this morning that Doughty will not play tonight, and is being evaluated here in St. Louis.

Update from Todd McLellan’s. Doughty is being evaluated in St. Louis this morning and will not be available to play tonight. @LAKings https://t.co/D7K7uxOmWh

Expect Olli Maatta to check in for his season debut. The Kings have the luxury that many other teams do not, in inserting a two-time Stanley Cup champion into the lineup. While miscast as Doughty’s partner last season, Maatta played solid hockey when partnered with Sean Walker on the team’s third pairing, offering a simple, yet effective game.

“The first thing from Olli is going to be how is he going to respond after his injury, he took a big blow in the exhibition season,” McLellan said. “He’s a veteran player, he’s going to have to get going again. He’s had some real good practice time, I know he’s healthy, physically, and mentally, he’s got to be prepared to put himself in a situation like that again. I believe he will be fine. It’s been a while since he’s played a game, so he’s going to have to keep things simple, move pucks and be a good defender. He’s very capable of doing that.”

Last season, no defensive pairing created more shot attempts on a per-60 basis than Maatta/Walker, with the duo on the positive side of shot attempts and high-danger chances, and better than the team average in scoring chances. On his own, Maatta was a safe, low-event player, ranking in the team’s Top-3 in terms of fewest opportunities allowed in the aforementioned categories. Simply put, about as solid of an option as you could turn to for someone checking in.

Yesterday morning, McLellan inserted Arthur Kaliyev into the lineup, in place of Vladimir Tkachev, and Kaliyev responded with his best performance of the season. The young winger collected his first career NHL assist, as his line with Gabe Vilardi and Trevor Moore was effective all night, the third line’s best performance of the season. That unit had nine shot attempts, compared to just three against, with Vilardi tallying on the power play, off of Kaliyev’s primary assist.

McLellan talked in advance of yesterday’s contest about wanting to see more from that line, and he was rewarded with a solid performance from the trio in yesterday’s overtime defeat.

Here’s how the forwards aligned yesterday, with the defensive pairings to be determined.

BLUES VITALS: For the second straight night, the Kings will participate in a home opener, with tonight’s game in St. Louis the first on home ice this season for the Blues. The Blues opened the season with road victories over Vegas, Arizona and Colorado and present a difficult foe for the Kings, though one that they were successful against last season.

“We’ll look at it, there are some things that we think can help us in a game against St. Louis,” McLellan said this morning. “Doing the pre-scout, they’ve averaged five goals per game and they weren’t doing that last year. Everybody on their team is playing really well, they’ve got some depth scoring, they’re healthy, I don’t know if they were ever that healthy last year. They’re a Stanley Cup Champion team from a couple years ago and you can see why. It will be a big test for us, home opener, they’ll have some energy, but there are some things that we can take from last year’s series and perhaps apply this year.”

Last season, forwards Ryan O’Reilly and David Perron led the Blues with nine points apiece in head-to-head play against the Kings. The slated third man on that line this season was Brandon Saad, who is currently out with an injury, and looks set to be replaced by forward Klim Kostin, who tallied twice in a win over Arizona earlier this week. Also unavailable is Pavel Buchnevich, who is suspended.

Per Jim Thomas of the St. Louis Post Dispatch, here’s how the Blues lined up during yesterday’s practice –

Working The Goaltenders
As McLellan shared with us yesterday, the plan to play Quick yesterday and Petersen tonight was something that had been planned out in advance of the trip.

“Knowing that we had back-to-back games, we had laid out a goaltender schedule through [tonight’s game] and then we’ll see what happens,” he said, of the rotation. “It’s important to get both of them playing, so we’ll do that.”

Early in the season, getting both goaltenders into game action, with repetitions both in games and in practice, was an important goal for the Kings.

McLellan acknowledged that at this point, he’s been happy with the play of both Quick and Petersen, with neither, thus far, on such a hot streak that they can’t be taken out. As the season progresses, we likely will not see an every other game rotation between the two. At times, one will get hot and claim more of the net. At other times, that might flip.

“There isn’t a goaltender on our team that’s running away with it, and that’s a real good thing,” McLellan said. “One of them is going to get hot at one point, I believe that, and right now they’re both very good.”

There’s also the importance of working the goaltenders during practice. McLellan used the analogy of a pitcher early in a baseball season. You see pitchers stretched out as the season goes on, but sometimes waded in slowly. He discussed, at this point in the season, benefits to giving the goaltenders a chance to work with goaltending coach Bill Ranford during practices, and how that can positively impact their games.

“We’re okay with going back and forth, it’s also early in the season and Billy [Ranford] can work with the non-starter, get them reps and work on his game,” McLellan added. “It’s a lot like pitching in baseball early in the year, they get to work on their game on days when they’re not playing. That’s important too and it’s not really talked about when people consider starters, that the non-starter gets some work.”

Filling In For Drew
Replacing Drew Doughty means replacing a player in every situation, and there’s no one individual who can simply do what Doughty does. His value to the Kings is extremely high, playing well over 20 minutes per night, playing on both special teams situations, and late in games, up or down a goal.

At even strength, as noted above, Maatta will check in, and we know what Maatta is. He’s not coming up from the AHL for his major-league debut, he’s a veteran of nearly 500 games. A solid option for the Kings.

The other aspect of the situation is Doughty’s special-teams contributions. He’s averaged more than four minutes of ice time on special teams, across power play and penalty kill, and is a key part of what the Kings do in all situations.

The penalty kill has Mikey Anderson and Alexander Edler as its two most active defensemen so far this season, with all six defensemen capable of playing shorthanded. The power play is a bit trickier.

Matt Roy filled in on the blueline last night, on the extended 5-on-4 sequence, and was eager to get low, hard shots on goal from the center point, something that McLellan liked.

“It will be a committee right now, we didn’t mind Matt Roy when he went up there, he was willing to shoot the puck and he keeps things very simple. It’s hard to replace Drew doughty. I don’t think I’m saying anything that’s not obvious, it’s hard to replace him in those situations, but it’s a great opportunities for some other people. Alex Edler has played on the power play before and there’s even an opportunity to go five forwards at some point if we really needed to, depending on the game situation. There are some elements that we can look at.”

Lastly, an interview with Anze Kopitar, with ESPN Los Angeles, from earlier in the week, available HERE.

Kings and Blues, tonight at 5 PM Pacific time, coming up next in St. Louis.

By Zach Dooley
137 Comments
Behind the Scenes