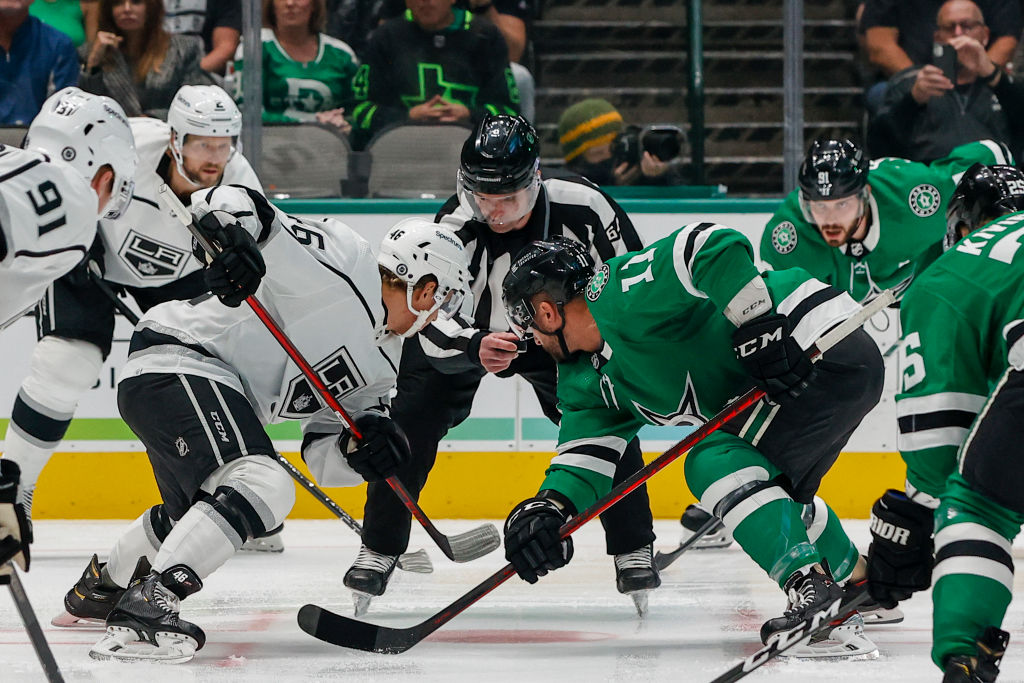 The shots on goal tonight read nearly 2-1 in favor of the Kings, but it was the Dallas Stars that wound up on the right side of a 3-2 overtime victory at American Airlines Arena.

Anze Kopitar extended his goal streak to four games with the game’s first tally, while Gabe Vilardi scored his first goal of the season, on the power play. In net, Jonathan Quick made 20 saves for the visitors.

The Kings jumped out to an early lead through none other than Kopitar, who buried a tic-tac-toe passing play at the back post, with both of his wingers collecting the assists. Viktor Arvidsson created the goal, with a cross-crease feed that Kopitar collected and slammed home for his sixth goal of the season.

The Stars bounced back, however, with a power-play goal late in the first period, to bring the game into the first intermission tied at one. Stationed at the center point, defenseman Miro Heiskanen fed Tyler Seguin to his left, and the Dallas alternate captain wired home a one-timer, inside the far post, to level the score.

After a dangerous hit on defenseman Drew Doughty, by Dallas blueliner Jani Hakanpaa, the Kings got a five-minute power play late in the second period. The visitors capitalized once, through Vilardi, who took a feed from Arthur Kaliyev and beat Stars netminder Braden Holtby over the left-hand shoulder for the goal.

The Stars once again drew level with a power-play goal of their own, this from Heiskanen, for his second point of the evening and the game-tying goal. Dallas worked the puck the other way, with Heiskanen burying from the right circle, to knot the score at two midway through the third period.

After what was a thrilling overtime period, from an offensive standpoint, the Kings were on the wrong side of the outcome, as Denis Gurianov drove the net and scored on the backhand for the game-winning goal.

Hear from Kopitar and Todd McLellan from after the game.

*McLellan said after the game that there was no update on Drew Doughty, beyond a lower-body injury that forced him out of tonight’s game. He said that Doughty will be evaluated tomorrow and we should expect to know more in the next few days.

Anze Kopitar
On if tonight was a point lost, or a point gained, considering the way the game went
We certainly had our opportunities, you want to put the game away. We had the lead again going into the third and we gave it up. Yeah, we’ll take the one point, but we definitely should not be satisfied with that point.

On the chances the team had to put the game away that didn’t go in
We had quite a bit of chances, we had chances in overtime too. It’s something that, obviously, we’ve got to capitalize on if we want to win games.

On what went on for him when he saw Drew Doughty go down in the second period
There’s a game that needs to be played, but obviously you don’t want to see him go down. It doesn’t matter who it is, it’s a teammate and if somebody goes down, it’s not a good feeling. Hopefully it’s nothing too serious.

On the emergence of younger players tonight
I think everybody is starting to settle in a little bit better now. It’s nice to see everybody making plays and having an impact, but with all that being said, we lost the game, so we’ve got to correct it.

Todd McLellan
On how he felt the other five defensemen handled opportunities once Doughty went down
I thought the five of them handled it well, they played well, they gave us real good minutes. Royzie went in and played on the power play. What was a little bit disappointing was the game management part of it. Two defensemen took penalties in the offensive zone and we shot a puck out. You’re down to five, two defensemen sit in the box for four, four and a half minutes straight, it’s pretty taxing on that group, especially on the penalty kill. In that sense, the ability to fight through it, it was outstanding I thought. The game management that put us into that situation is obviously something we have to fix.

On the performances of younger players this evening, specifically Kaliyev and Vilardi
Mooresy, Gabe and Arty, I thought they had a real good night. I thought Arty made a difference there, with his size and his physicality, he skated and protected pucks, he bought time for Gabe to get involved and Mooresy certainly helped out. Again, the penalties, late in the third, didn’t help them, it took them out of the game. We had to use the penalty killers and all of a sudden there’s six minutes on the clock and they haven’t gone for seven or eight minutes, it’s a three-line game then. It wasn’t because they played poorly that they didn’t play down the stretch, it’s that the game presented itself differently.

On talking about game management for the second straight one-goal loss
Different situations, all lessons we need to learn. We’ve been preaching it, I talked to you guys this morning about it. They’re tough lessons to learn, but I think they’re correctable, I really do. It’s not for a lack of effort, they’re giving everything they have in those situations, it’s just managing it a little bit better would certainly help us out. I’m talking that way, yet they played an outstanding game, Walks and Matty Roy were outstanding, Edler, Toby, Mikey, all five of them were really good I thought.

– With his first-period goal, forward Anze Kopitar has now found the back of the net in each of the Kings four games this season. Only two other players in franchise history have posted a longer run: Charlie Simmer (6, 1979-80) and Luc Robitaile (5, 1999-00).
– Forward Gabe Vilardi scored his first goal of the 2021-22 season, a power-play tally. As a team, the Kings have four power-play goals from four games played this season.
– With the primary assist on Vilardi’s goal, forward Arthur Kaliyev collected the first assist of his NHL career.
– The Kings surpassed 40 shots for the second time in four games this season. With 45 shots on goal, the team fell two shy of their season high (47, 10/14 vs. Vegas)
– Tonight was the first overtime game of the 2021-22 season.

The Kings will travel to St. Louis tonight and will take on the St. Louis Blues tomorrow evening at 5:00 PM Pacific Time.