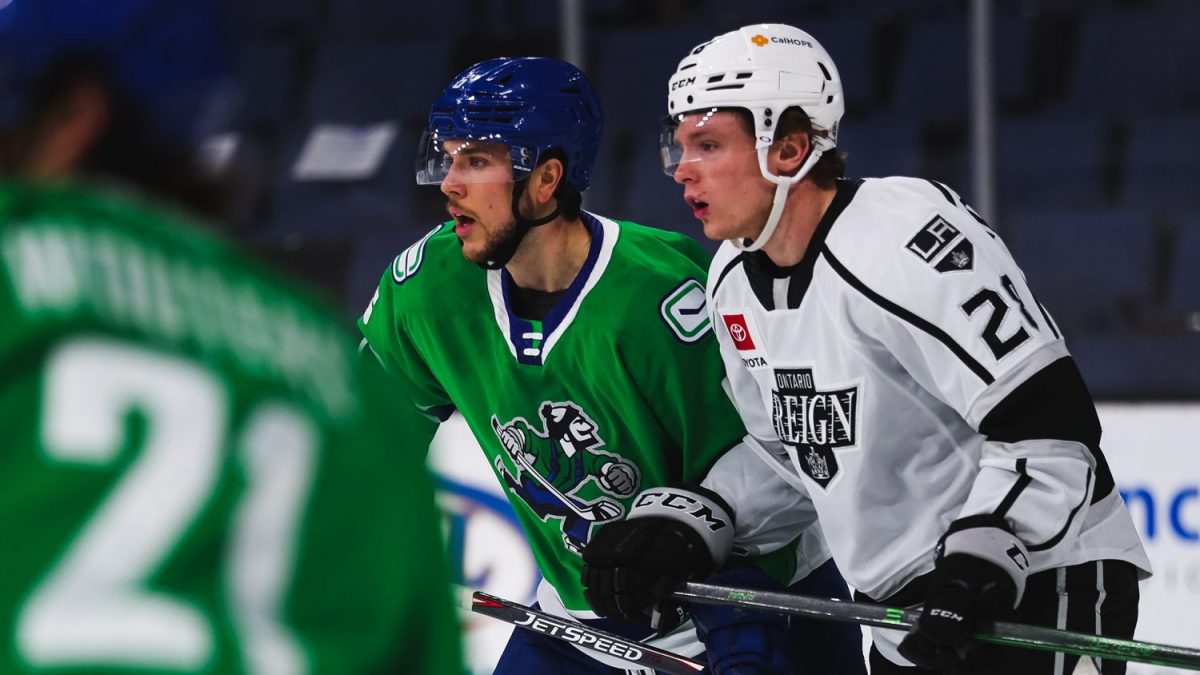 TONIGHT’S MATCHUP: The Ontario Reign continue their season-opening five-game homestand Tuesday night when they take on the Abbotsford Canucks for the second time in three days at Toyota Arena.

WHAT TO WATCH FOR: The Reign are looking for revenge after falling short to the Canucks in a shootout on Sunday. Despite outshooting their opponent 36-30, Ontario never led in the contest. Abbotsford will aim to use their tenacious, grinding style of play after holding the Reign to just two goals in the series opener.

LAST TIME OUT: Abbottsford earned their first win in franchise history Sunday at Toyota Arena, outlasting the Reign in a shootout, 3-2. All four goals scored in regulation came in the second period, including Ontario tallies by forwards Alex Turcotte and Brayden Burke. Reign goaltender Jacob Ingham made his second career AHL start and stopped 21 shots in a losing effort.

TYNAN SHARES THE WEALTH: Eighth-year pro TJ Tynan has made an immediate impact on the Reign roster, recording three assists in his first two games. The reigning AHL Most Valuable Player has found great chemistry with Martin Frk and Tyler Madden on the team’s top line. But he also helped out a pair of younger attackers during the second period of Sunday’s win, taking a pass from rookie defender Helge Grans and setting up second-year center Alex Turcotte for a deflection that found its way into the net for Ontario’s first goal of the game. The Orland Park, Ill. native’s second helper in Saturday’s win over San Diego was the 350th point of his AHL career.

INGHAM ASSISTING FROM THE NET: Goaltender Jacob Ingham was solid in his first appearance of the 2021-22 season, making 27 stops in regulation before turning aside three attempts in a losing shootout effort. But he also factored into the team’s offensive output, registering an assist on Brayden Burke’s second period power play goal. The helper was the second of Ingham’s pro career after his first came earlier this year on April 24 during a winning effort in the ECHL with the Greenville Swamp Rabbits.

SCOUTING THE CANUCKS: Abbottsford, the newest addition to the AHL’s Pacific Division, opened their inaugural season with a 5-3 loss in Bakersfield Saturday before earning a shootout win in Ontario Sunday. Forward Jarid Lukosevicius scored the first goal in team history against the Condors from former Reign forward Sheldon Rempal and Devante Stephens. Both Lukosevicius (1g, 1a) and Rempal (2a) had multi-point nights for the Canucks. Phil Di Giuseppe was the hero for the club in their first win, scoring a goal in the second period before winning the game by converting in the fourth round of the shootout. Goaltender Michael DiPietro got the start in their opener on Saturday, while Arturs Silovs earned a win in his first appearance of the season Sunday with 34 saves and a perfect 4-for-4 mark in the skill session.

TIMELY TURCOTTE: Alex Turcotte’s first tally of the 2021-22 season Sunday came just 3:16 after Abbotsford scored the opening goal of the game early in the second period and gave the Reign an emphatic response to even the contest. The Island Lake, Ill. native completed his rookie year during a shortened 2020-21 with 21 points in 32 games on six goals and 15 assists. Turcotte has finished with a +1 rating in each of his first two outings to open the season.

BURKE’S BOUNCE: With the Reign trailing 2-1 in the second period Sunday, Brayden Burke found himself in the right place at the right time, burying an opportunity in front of the net to tie the game that came from a fortuitous bounce. Ontario defender Kale Clague sent the puck deep in the Abbotsford zone, but instead of rolling around the boards, the biscuit ricocheted in the opposite direction, away from goaltender Arturs Silovs who had come out of the cage to play it. The tally was Burke’s first with the Reign after previously scoring 35 career AHL goals during three seasons to begin his pro career with the Tucson Roadrunners.