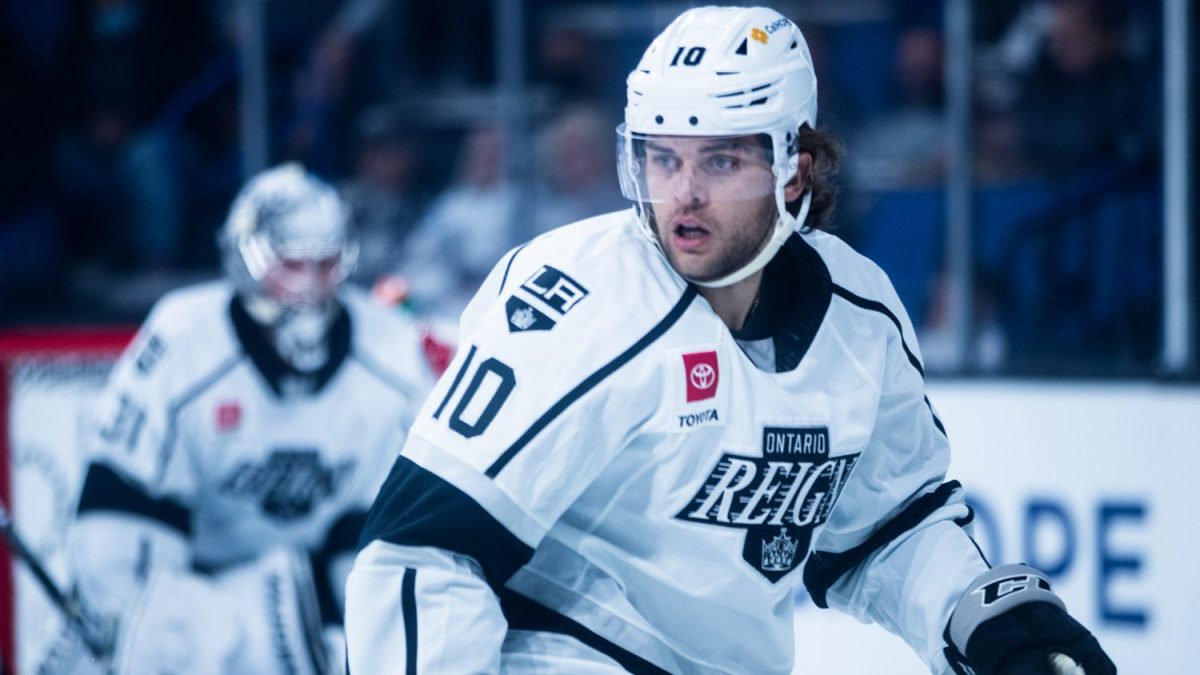 TONIGHT’S MATCHUP: After securing a win on Opening Night over San Diego at Toyota Arena Saturday, the Ontario Reign battle the Abbotsford Canucks for the first time ever on Sunday afternoon.

WHAT TO WATCH FOR: Ontario got their season going Saturday with a 5-2 win and outplayed San Diego in all facets of the game, besting them in shots on goal, as well as special teams. The Reign will look to do the same against the Canucks Sunday, who lost the first game in team history Saturday in Bakersfield by a 5-3 score. Ontario is now in the midst of five home games in an eight-day span to open the 2021-22 season.

LAST TIME OUT: The Ontario Reign were victorious on Opening Night of the 2021-22 season at Toyota Arena on Saturday, defeating the San Diego Gulls by a final score of 5-2. Forward Martin Frk led the way with the first two goals of the year, while goaltender Matt Villalta was strong between the pipes, making 22 saves in the victory.

FANTASTIC FRK: Toyota Arena fan favorite Martin Frk scored the first two goals of the season for Ontario on Saturday, returning to the building in style. The Pelhrimov, Czech Republic native put the Reign ahead 1-0 in the final minute of the first, scoring off a quick wrist shot in the slot to give his team the lead at the intermission. Then in the middle frame, Frk blasted a one-timer to the back of the net for his second goal of the night, opening up the score. He has now totaled 13 career goals in front of the home fans in Ontario at Toyota Arena.

MOVERARE MAKING MOVES: Reign defenseman Jacob Moverare posted a goal and an assist in the team’s Opening Night victory Saturday and was later named the third star of the game for his efforts. The second year blueliner put Ontario ahead 3-0 in the second period with his second career AHL goal. He then added a power play assist in the final minute of the game on Samuel Fagemo’s late strike to close out the scoring for the Reign. In 26 games as a rookie last season, Moverare registered four multi-point outings.

SCOUTING THE CANUCKS: Abbottsford, the newest addition to the AHL’s Pacific Division, is looking for their first-ever win Sunday, coming off a 5-3 road loss to Bakersfield in their season-opener. Forward Jarid Lukosevicius scored the first goal in team history last night, finding the back of the net at 2:18 of the second period from Sheldon Rempal and Devante Stephens. Both Lukosevicius (1g, 1a) and Rempal (2a) had multi-point nights for the Canucks. Veteran forward Justin Bailey also got on the scoresheet with a goal in the second that gave Abbotsford a 3-2 advantage, but the Condors struck three times in the third to claim a victory in their home opener. Sheldon Dries and Phil Di Giuseppe are also expected to be impact players up front for the Canucks, as well as Madison Bowey on the back end.

RETURNERS: 21 of the 26 players on the 2021-22 Reign Opening Night Roster were returners to the club, consisting of many entry-level and veteran standouts. Highlighting the many familiar faces is fifth-year captain Brett Sutter, who begins his 15th season having already logged 969 games played in his 14-year pro career. Six of the club’s eight defenders are returning to the roster, including Austin Strand and Kale Clague, who both earned opportunities at the NHL level with the LA Kings last season.

KUPARI’S CALL-UP: Just hours after the announcement of their Opening Night Roster, the Reign saw their first call-up of the young 2021-22 season when Rasmus Kupari was recalled by the LA Kings. Kupari was immediately inserted into the lineup for LA, playing 10:27 of action at STAPLES Center in a 3-2 loss to the Minnesota Wild. Now in his third North American professional season, Kupari had previously played in seven games with the Kings during the 2020-21 campaign, scoring one goal. A year ago with Ontario, the Kotka, Finland native posted 23 points in 32 games on eight goals and 15 assists.