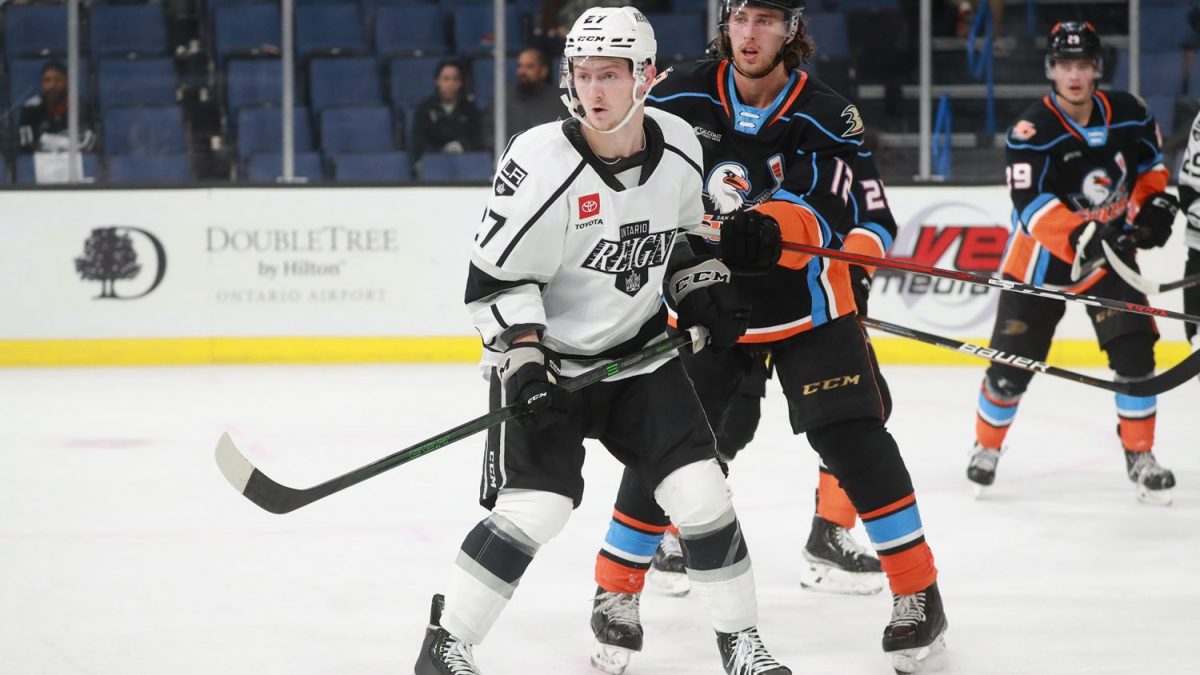 TONIGHT’S MATCHUP: The Ontario Reign open the 2021-22 regular season by welcoming the San Diego Gulls to Toyota Arena for each team’s first game of the year. After playing at the Toyota Sports Performance Center in El Segundo for the duration of the 2020-21 campaign, Ontario is set to play a regular season game at their home venue for the first time in 595 days.

WHAT TO WATCH FOR: Ontario is looking to start its new year off on the right foot after finishing a shortened 2020-21 by going 16-9-2-0 in their final 27 games of the 40-game slate. The Regin will play a division-heavy schedule in 2021-22, with only four non-Pacific matchups coming against the Grand Rapids Griffins in February and March.

RECENT HISTORY WITH SAN DIEGO: Tonight’s game marks the first of 12 meetings between the Reign and Gulls during the 2021-22 season. The two clubs faced off twice in preseason action last week, with the Gulls earning consecutive victories by scores of 4-2 and 5-2. Last season, Ontario finished 3-5-2-0 in 10 contests against San Diego, which included a 1-2-2-0 mark at home and a record of 2-3-0-0 on the road. After tonight’s contest in the Inland Empire, the Reign will welcome the Gulls back to Toyota Arena in one week on Saturday, Oct. 23 for their second matchup of the season.

LAST TIME OUT: In the second and final preseason matchup with the San Diego Gulls Monday night at the Honda Center in Anaheim, Ontario fell behind in the first period and came up short in a comeback attempt, falling 5-2. Forwards Brett Sutter and Johan Sodergran scored for Ontario in the loss, while goaltender Matt Villalta played 40 minutes and turned aside 13 shots for the Reign.

RETURNERS: 21 of the 26 players on the 2021-22 Reign Opening Night Roster are returners to the club, consisting of many entry-level and veteran standouts. Highlighting the many familiar faces is fifth-year captain Brett Sutter, who begins his 15th season having already logged 969 games played in his 14-year pro career. Six of the club’s eight defenders are returning to the roster, including Austin Strand and Kale Clague, who both earned opportunities at the NHL level with the LA Kings last season.

WROBO’S SECOND GO: Reign Head Coach John Wroblewski begins his second season at the helm in the Inland Empire Saturday night. He is serving as the second AHL bench boss of Ontario after spending four seasons as a head coach with USA Hockey’s National Team Development Program (NTDP). In his most recent tenure with that program that spanned 2016-20, Wroblewski helped lead the NTDP to its first USHL playoff berth since 2012. In international competition, he helped guide the U.S. Under-18 Men’s National Team to a goal-medal finish in 2017.

SCOUTING THE GULLS: San Diego is coming off a third-place finish in the Pacific Division during 2020-21 with an overall record of 26-17-1-0 in 44 games. The Gulls return two of their most potent offensive talents from a year ago in Vinni Lettieri and Alex Limoges, who both flourished during the shortened season. Lettieri posted 26 points in 22 games on 14 goals and 12 assists and dominated the 2021 AHL preseason against Ontario with four points (2g, 2a), while Limoges racked up 21 points in 23 games on 11 goals and 10 helpers during his rookie year. Returners on the backend for San Diego include Hunter Drew, Trevor Carrick, Kodie Curran, and Brendan Guhle. In goal, Olle Eriksson Ek is back for his second season with the Gulls after appearing in 15 contests and earning a .901 save percentage as a rookie.

KALIYEV THE KING: The Reign’s leading scorer from 2020-21, Arthur Kaliyev, has begun the year on the LA Kings roster after a standout training camp and preseason. Kaliyev finished his rookie AHL campaign with 31 points in 40 games on 14 goals and 17 assists which included three power play strikes and two game-winning tallies. The NHL opportunity wasn’t his first, as he made the most of an in-season call-up by scoring a goal in his only previous appearance with LA on Feb. 2. Kaliyev was in the lineup for the Kings on Opening Night and registered one shot on goal in 11:43 of action.