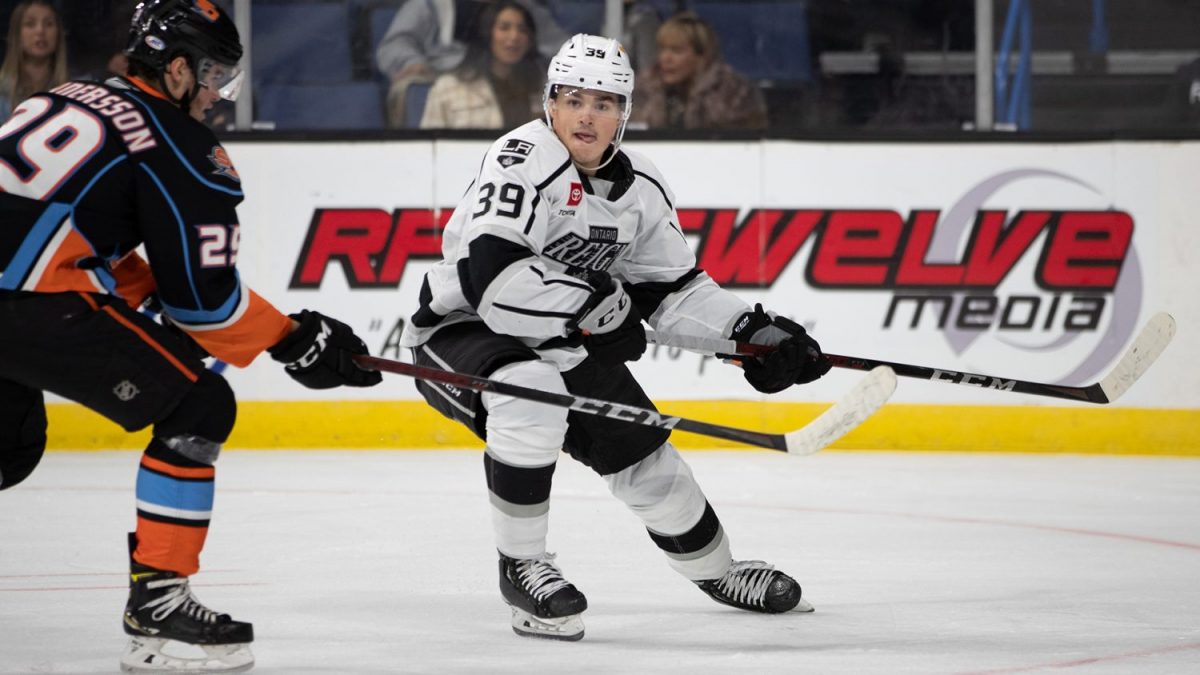 The Ontario Reign (1-0-0-0) were victorious on Opening Night of the 2021-22 season at Toyota Arena, defeating the San Diego Gulls (0-1-0-0) by a final score of 5-2. Forward Martin Frk led the way, scoring the first two goals of the year for Ontario, while goaltender Matt Villalta was strong between the pipes, making 22 saves in the victory.

More from Frk and Head Coach John Wroblewski below.

At the end of a mostly quiet first period, Frk struck to open the scoring on a wrist shot that beat San Diego goaltender Olle Eriksson Ek with just 23 seconds to play in the frame and took a 1-0 lead into the first intermission.

Ontario extended their lead in the second with their best period of the game. First, Frk scored on the team’s first power play of the year, blasting a one-timer into the net off a feed by defender Sean Durzi. Forward TJ Tynan picked up the second assist on the play, his first point as a member of the Reign.

Then just 1:05 after the second goal, defenseman Jacob Moverare ripped a shot from the left point over the glove over Eriksson Ek to make it 3-0 in favor of Ontario.

The Gulls got on the board late in the middle frame on a goal by Jacob Perreault, but were unable to get any closer in the third.

Ontario sealed the victory with an empty-net goal by Aidan Dudas with just under three minutes to play in the third period. After scoring the goal, Dudas took a high stick that raised tensions between the teams. The Reign went to the power play and added another man-advantage tally when Samuel Fagemo finished off a play in front of the net. Defenseman Jordan Spence picked up the first assist on the final Ontario strike to register his first pro point in his first game.

The Reign will complete a back-to-back home-opening weekend Sunday afternoon with their first-ever meeting against the Abbotsford Canucks at 5 p.m. PST.

John Wroblewski
Opening thoughts after the team’s victory
It was good to corral the final bounce in period one, it was kind of a jumbly period where a lot of things were in flux and for us to be able to capitalize late there, I thought it gave us a really solid opportunity to keep things moving and give us some confidence to adjust our game without having to get too critical going into the second. I thought the guys played a tremendous second period, we checked really well, played on angles, good stick details and really committed to each and every forechecker. Loose puck battles, showed up with a lot of line rushes, I think when we watch the tape I’m guessing that we forced a lot of danger zone turnovers in that period and that led to a lot of good things offensively.

On the special teams gameplan tonight after struggling against SD last year
When you have a flank guy like him (Frk) on the power play, you want to get him as many quality touches as possible, direct pucks to the net and that opens up a lot of different things so there’s no real recipe, they know what we’re trying to do and if they can take him away then we work a 4-on-3 on the other side. We’re just happy to have that success initially and last year it wasn’t a great percentage but analytically we were actually pretty solid.

On if it’s the team’s plan to generate shorthanded chances when down a man
It’s definitely a plan. We want our guys to read offense every single time whether we’re in the defensive zone or whether they’re dumping a puck in and it’s goaltender retrievals, we’re still thinking offense and by thinking about offense, how are going to break out efficiently and get going the other way and try to put pressure on their defensemen, you’re actually taking care of your own end in a way.