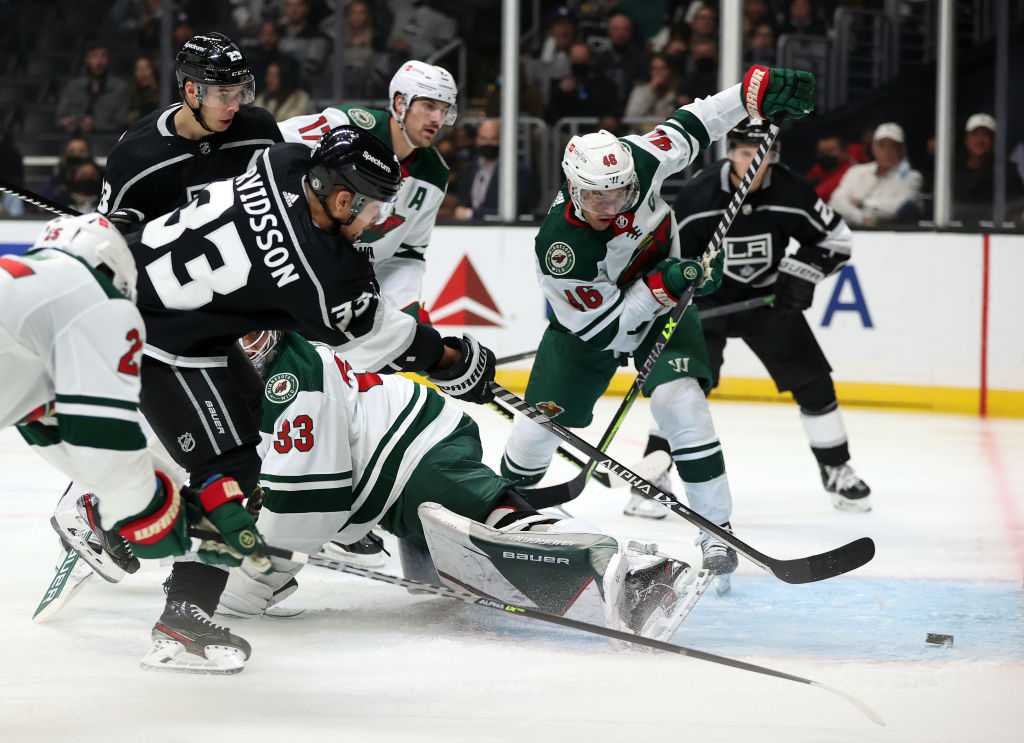 The Kings and Wild entered the third period tonight on opposite ends of Game 2 of the regular season compared to last year, when LA led 3-1, in the same game, at the same venue. Unlike last season, there was no score reversal, as Minnesota held on for a 3-2 victory, with the Kings having to settle for just a split here in their first two games.

Viktor Arvidsson and Anze Kopitar scored for the Kings, with Kopitar and defenseman Drew Doughty (0-2-2) each tallying two points in the defeat. Jonathan Quick, who also tallied an assist, made 27 saves on 30 shots, in a defeat in which he took very little of the fault.

The Kings opened the scoring, on the man advantage, as Arvidsson netted his first as a member of the Kings organization. After a Kopitar one-timer was kicked aside by the right pad of Cam Talbot, Arvidsson collected the rebound, showed poise to outwait the netminder and slid home the puck on his forehand for the early 1-0 lead.

It was the visitors that scored the period’s final three goals, however, as the Wild surged out to a 3-1 advantage through 40 minutes. Forwards Frederick Gaudreau, Viktor Rask and Ryan Hartman each tallied for Minnesota, with the latter two finishing around a called-off goal from Nico Sturm, corrected ruled to be goaltender interference. Regardless, the Wild led by a pair after two periods, carrying momentum into the final frame.

The hosts pulled one goal back early in the third period, as Kopitar fired a hard, low pass across the ice that deflected off of Matt Dumba’s skate and into the net, for his fourth goal of the season. The Kings had some additional looks down the stretch, but could not beat Talbot again, falling by the 3-2 margin.

Hear from defenseman Matt Roy, Arvidsson and Head Coach Todd McLellan from after the game.

Viktor Arvidsson
On his first goal as a Kings
It was nice to get one, I think I had a really good chance right before, half the net was open, but I missed. Then, it came out to me and I was thinking about just ripping it, but I saw an opening on the far side, so I held it and it went in. It was nice.

On his first goal as a Kings
Team-wise, I think we started okay, it was a pretty even first, but in the second period they had some long shifts on us. We scored first, but they got a timely goal right after we scored and we’ve got to be better in that department. In the third period, we pushed, got one back. At the end, we tried but it didn’t happen.

On the team’s chances created tonight
I think we had some chances to score, they had some too, I thought it was a tight game. Obviously, we scored six the other night, it’s not going to happen every night, and we’ve just got to get back on track.

On the progression of his line with Kopitar and Dustin Brown
They’re two veterans who have been in the league for a long time, and won. Obviously they’re great players. It’s been an adjustment, I’m trying to find where the quiet ice is, where they are, where I am and where I should be. It’s a little bit of a change, but I’m getting there, and I think I’m learning to read how they play too.

Todd McLellan
On his overall thoughts on tonight’s game
Different type of game. I thought the Vegas game was a little more open, there were a lot more rush opportunities, this was a grinding game. It was in the trenches, it was heavy, in the paint, along the boards, in the faceoff circle. I thought there were moments, or fractions of the game, where we had some momentum, and there were other times when they did. We were just on the short end. The goals that we gave up, we’re not going to be perfect every night, but they’re certainly ones we are capable of preventing.

On if he believes the team can win these types of games
I believe we can, yeah. The team that we beat the other night went a seven-game series against this Minnesota team last year and I don’t think Minnesota got enough credit last year, they’re going to get it this year. They’re a big, heavy, strong team. We hung in there with them, but it was our first, real grinding game of the season, it was a heavy game.

On giving up a goal right after scoring the game-opening goal
It’s obviously disappointing no matter who is on the ice. [The fourth line] had a really good shift, after we scored, they had a good shift, it was exactly what we talked about. The backend of the shift, we got careless at the blueline and now we’ve got to play the next 20 seconds in our end, against size and strength, and it eventually costs you when you get running around. If we could go back and take a goal out of the game, that’s the one that I would pick. The others, we made some mistakes yes, coverage mistakes, but those are going to happen. To me, that was a little bit of game management in that situation, and we’ve been stressing that for a month and a bit already.

On if these grind-it-out games make it harder to roll momentum from line to line
I think it depends if you’re up or you’re down, circumstances are a little bit different here. We cut back to three lines in the third, took some players out of the game, either they took them[selves] out or we took them out. Sometimes, they take themselves out the way they play. We were looking at rolling our offensive lines, or our top lines, a little bit more, getting them in the game a little bit more, and it still wasn’t enough.

On certain players who he felt weren’t at their best tonight
I think that some of the individuals maybe weren’t prepared for this type of game, they have to experience it. I think some of the older players knew what was coming, I’m not sure if some of the younger players knew, and I’m not talking necessarily age, I’m talking experience. Anybody that had played against this team last year knew how heavy and hard it’s going to be. That doesn’t mean that all of them performed at the top end, and the newer players have to experience it for themselves. We’ll figure it out as we go.

Notes
– With two points tonight, Anze Kopitar is tied for the NHL lead in both goals (4, Tyler Bertuzzi) and points (7, Steven Stamkos). Kopitar has multiple points in both Kings games this season, and has a point on seven of the team’s eight goals in total.
– With two assists this evening, defenseman Drew Doughty leads all defensemen in the NHL with six points (1-5-6) this season. His five assists are tied with Tampa Bay’s Victor Hedman for the league-lead amongst not only blueliners, but all skaters
– Forward Viktor Arvidsson scored his first goal as a member of the LA Kings organization. Arvidsson has points in both Kings games this season.
– With the secondary assist on Kopitar’s goal, goaltender Jonathan Quick tallied the 20th assist of his NHL career. Quick is the first goaltender to collect an assist this season, and leads all active netminders in helpers.
– The Kings are tied for third with three power-play goals so far this season and are tied for second in power-play percentage (50%).

The Kings are scheduled to skate tomorrow at 11 AM at Toyota Sports Performance Center.