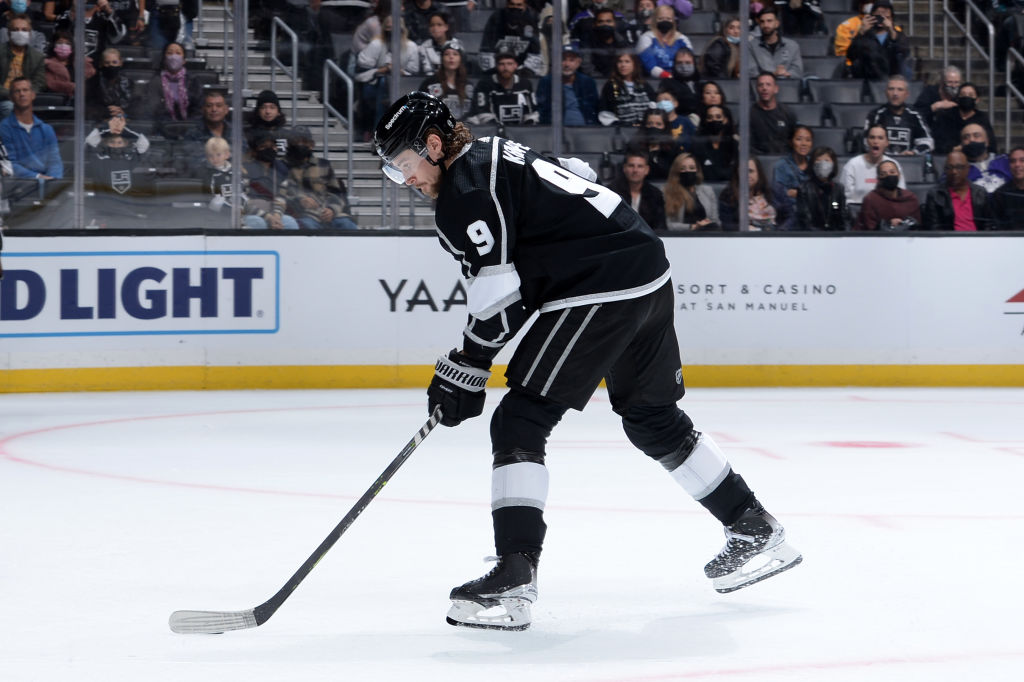 Last night was a major high for the Kings. Opening night, facing off against the team projected by just about everyone who made predictions to win the Pacific Division, new players suiting up for their first regular-season game with the Kings, full house at STAPLES Center. The outcome? A convincing, four-goal victory on home ice.

For the team’s leaders, you couldn’t have asked for much more of a statement. Anze Kopitar had a hat trick and five points, Drew Doughty matched a career best with a four-point night and Dustin Brown got the rout started with the first goal of the season, as a part of a multi-point performance.

Now, we’ve all had a sleep with the Kings at 1-0, we think back to the Matt Roy Motto. Never too high, never too low.

“I think we’re okay in that area, our leadership group has been through a lot, they’ve been up and down with successes and some failures along the way, when you’re around for that many years,” Todd McLellan said. “They should be able to keep things at an even keel, we’ll try to do that as a staff. The trick is to manage the workload on off days, that you’re practicing with a purpose and preparing the team, without burning the team out, and every player is different. The workload in practice varies, and it will throughout the season.”

Last night was a hell of a start to the season, and now the focus transitions to the Minnesota Wild, a thorn in the side of last season’s Kings. If you recall, and it’d be hard not to with how often it’s brought up, the Kings carried 3-1 leads into the third period against Minnesota in both games on Opening Weekend last season, and wound up losing both games, 4-3 in overtime. The Kings won just two of eight overall against the Wild last season, something that they are quick to remember, though McLellan also pointed out today the weird circumstances around that series last season.

“Last year is last year and this year is obviously a new year,” McLellan said. “We competed hard against that team last year, and some of the games were odd. I remember them coming in and they had a number of players out, COVID related, and we opened up the season against them and though we knew what to expect, it was the empty building. There was the injury-filled game in Minnesota with Roy and Walker, there were some odd nights, over and above the strange season we had, against that team.”

In terms of today’s practice, there weren’t any apparent changes to the group that we saw yesterday evening against Vegas. That alignment is shown below for reference –

The Kings will conclude their brief, two-game homestand to begin the season tomorrow evening against Minnesota, before they hit the road for four games, beginning on Tuesday evening against Nashville.

Our Last Look In The Rear View Mirror
Okay fine……we’ll take one last look back at yesterday’s performance. From the players we spoke with this morning, and those we talked to last night, everyone was generally pleased with the outcome of the game and the work that went into it. Hear from Alex Iafallo, Adrian Kempe and Todd McLellan, with the latter’s view coming after he and the staff had a chance to review the video.

AI – I thought it was good last night, real good, it was a fun game. Every line, all of our defensemen, straight down to Cal were awesome. I thought we pushed the pace the whole game and played good offensively and defensively.

AK – It was fun to play hockey again, and the way we played it was very fun. It was nice to have the fans back and we played a solid 60 minutes, so everybody was really excited to play. We’re got to keep that going for sure.

TM, on his impressions after watching back the video – We did have a chance to review it, watch it again, digest it, a lot of the comments that we made after the game showed up in the video. When we made mistakes, we had some tenacity within the group to get back, cover for each other. When we started training camp, talking about being aggressive, I think everybody thought it was just going to be going forward, on the forecheck, but it can be without the puck coming back, playing as units of five all over the rink. That showed up all over the rink, which is a good thing.

Beyond the dominant headlines, however, was a strong showing from the newly assembled Alex Iafallo – Phillip Danault – Adrian Kempe line. That trio controlled nearly 75 percent of shot attempts on the evening, and they combined for one goal as a line, though Kempe had a beautiful assist on one of Kopitar’s goals, and Iafallo had two points on the evening.

“I think in preseason too we played well, we didn’t score as much as we wanted to, but we created lots of chances off the forecheck,” Kempe said of the unit. “I think we played well in the d-zone, Phil has been a really good fit with the team so far he’s a strong guy, a smart guy, makes the right decisions and me and AI obviously know each other from before. We’re just trying to create as much as we can off of the forecheck and I think that showed last night.”

That line, on paper, has the potential to be a possession monster. Danault has controlled nearly 60 percent of shot attempts over the last two seasons, while Iafallo and Kempe have also been strong possession players, traditionally.

These are also three players who should fit the approach that the Kings want to take. Three, responsible, two-way players who are also capable of producing offensively themselves, and creating for others. This line might just be where the two intersect. Take Iafallo for example.

On Kopitar’s second goal, assisted by Kempe, it was Iafallo’s dirty work in the neutral zone that won the puck back and flipped it back the other way for an odd-man rush. On another night, he might’ve been the player being spotlighted.

“I think Al is his own story every night,” McLellan said, of Iafallo. “The more you watch him, the more you appreciate the things he does away from scoring. It’s easy to put him on the ice, it just is, you look down the bench and you want to put him out again because his intent is always the right intent. He might get beat every now and then but he knows how to play the game.”

In typical hockey-guy fashion, it was Iafallo throwing the praise back onto his linemates. In this instance, it seems that the abilities of one complement the other two, and that’s a good thing to see in a newly formed line.

A good start to the year for that unit.

New Black & White On The New Guys
The latest edition of the LA Kings Black & White series was released this morning, with exclusive comments from Danault and Viktor Arvidsson, as well as Todd McLellan and Rob Blake, on the integration of the team’s four offseason acquisitions.

“I couldn’t be happier with the players that we’ve added. We’ve added experience. Each of them brings a different ingredient.” -Todd McLellan.

By Zach Dooley
35 Comments
Behind the Scenes