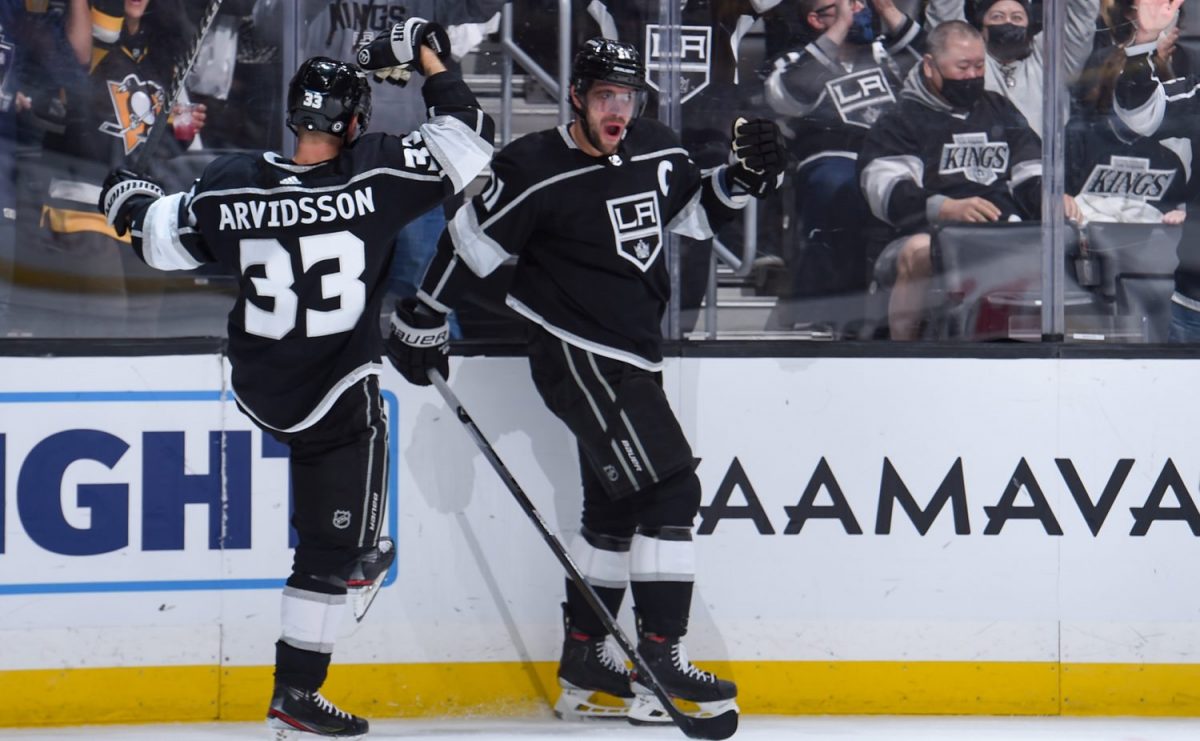 Could you have asked for much more of a statement from the LA Kings on opening night? Six goals scored, a four-goal win over the team projected by most to win the Pacific Division, a hat trick, a four-point night by a defenseman and the return of fans on home ice at STAPLES Center.

One heck of a night.

Anze Kopitar had three goals and two assists, while Drew Doughty had a goal and three assists, with the team’s stars leading the way, in front of an impressive team performance. The Kings were aggressive all night long, and several of the things we heard throughout training camp were put into practice here on Opening Night.

The visitors, a bit against the run of play, took the early lead at STAPLES Center, as defenseman Shea Theodore snuck a shot through from the right point, past goaltender Cal Petersen, for the 1-0 lead. LA, however, struck back with two goals of its own in the second half of the opening period, to take a 2-1 lead into the intermission.

First, forward Dustin Brown buried his own rebound, off of a Drew Doughty feed, to tie the game at one in classic Dustin Brown, near the blue paint, fashion. At the end of the opening period, it was the captain, Anze Kopitar, who capitalized with a power-play goal, a “let it fly” effort from the right-hand circle, to make it 2-1 in the latter stages of the opening frame.

The Kings poured on two more goals in the second period to take a 4-1 lead. First, Kings debutant Phillip Danault redirected a Doughty shot from the point past Vegas goaltender Robin Lehner to double the lead for the hosts. Kopitar added his second of the evening, burying a cross-ice feed from Adrian Kempe off a 2-on-1 rush, to make it a three-goal advantage for the Kings at the break.

The Kings added two more in the third period – through Doughty and Kopitar – to make it a six spot for the evening. Doughty’s goal was the second on the man advantage for the team on the evening, before Kopitar completed the hat trick with a heck of a move to the backhand, as the hosts closed their account for the evenint. Vegas pulled back a late consolation goal through Chandler Stephensen to bring us to our 6-2 final.

"We got a long ways to go, lot more games. Great start by the team."#GoKingsGo | @LAKings pic.twitter.com/7hQ37tuubY

Anze Kopitar
On his overall thoughts on tonight’s win
Very solid. First of all, it was throughout the lineup and all over the ice. They’re obviously a very good team over there and we talked about playing with some speed, with some poise and with the energy. We know they had a game under their belts already, so we wanted to come out as hard as we could. I think it was a really good sign for us when they scored a goal and it didn’t phase us, maybe in the past that would have been a wobble that turned into two or three. Just to show patience and not get discouraged was a really good sign for us.

On the two goals tonight on the power play
Yeah, we didn’t have the greatest preseason with special teams, so we were working on it this week. Obviously, we did a good job and tonight it clicked, we’re just trying not to overcomplicate things, get pucks to the net and they went in.

On having the performance he did on a night when everything seemingly went right
You just try to stay in the moment, you try not to think about too much. Just play, like I said, it was the first game of the season and we wanted to get off to a good start and get the two points in the bank and go from there.

On his PPG and how it developed
Vladdy has been making these plays throughout the preseason, so he’s very poised with the puck and everything. I just tried to give him a lane for him to not have to thread the needle through a whole bunch of people. I was just trying to get it on net and it went in.

Todd McLellan
On if he could have scripted tonight’s game any better
Probably not, that was a real good night for our team. To a man, through the lineup, everybody contributed. Things we tried to put in place over the last month showed up in the game, we used the word aggressive and we were that. Power play, penalty kill did their thing, positionally we were pretty good. It was a real good night for us, enjoy it while we can, get back at it tomorrow.

On the team not getting down after conceding first
I think that the belief is at a higher level right now than it was certainly at the end of last year, that’s just the way it is. The addition of four players, getting guys healthy, having training camp to work on the game, we should feel good about ourselves. Last year, at the end of the year, we might not have had the horses to overcome that and that’s probably what Kopi is getting at. Good for the group that they responded appropriately.

On if he’s more pleased with the six goals, or the strong defensive effort
That’s a good point, because I think the defensive effort allowed us to get into a number of our offensive opportunities. The backcheck, the tenacity on loose pucks, on Kopi’s second goal, Iafallo’s backcheck and commitment. Against this team, if you don’t have it, you’re fishing pucks out of your net left and right. They still had some chances, but we were much better than we were in the past in having that back pressure, having some tenacity coming back so that we could go the other way. It was a combination of both.

On getting contributions from each of the fourth Kings debutants
I think it’s important for them to feel comfortable around their teammates and they all want to have an impact right away, they all want to carry that forward. To have a good first night with your new team, you can go home, put your head on the pillow and feel good about it. Now, you come back to work tomorrow and the experience that those three guys have should keep us at an even keel and allow us to get back to work tomorrow and get ready for a tough game on Saturday.

On Kopitar’s play tonight
When your captain can come out and play that type of game tonight, it sets the tone for everybody. It’s funny, I talked to our guys during camp, I’ve only been in training camp with this group really for one year and half the time, I didn’t even know who I was talking to. I didn’t know if Kopi, Brownie, Doughty, some of these other players were having good or bad training camps, they didn’t produce points in the exhibition season, but they were getting themselves ready. It’s pretty clear that they were getting themselves prepared to play. Happy for them, happy for us.

Notes
– Anze Kopitar’s five points (3-2-5) is a franchise record in a season opener. He also becomes the third player in Kings history to record a hat trick in a season opener, joining Luc Robitaille (1988) & Jari Kurri (1991), and the fourth player to record on in the home opener.
– Kopitar also led the Kings with seven shots on goal and a +3 rating.
– Drew Doughty tied a career-high with four points this evening. He previously tallied four assists on January 4, 2010 against San Jose.
– Dustin Brown (1-1-2), Alex Iafallo (0-2-2) and Vladimir Tkachev (0-2-2) each tallied two points in the victory.
– Making his first career Opening Night start, goaltender Cal Petersen made 23 saves on 25 shots, good for a .920 save percentage, to earn the victory.
– Tkachev, Phillip Danault (1-0-1) and Viktor Arvidsson (0-1-1) each collected a point in their LA Kings debuts.

The Kings are set to return to the ice tomorrow evening at 11 AM at Toyota Sports Performance Center.