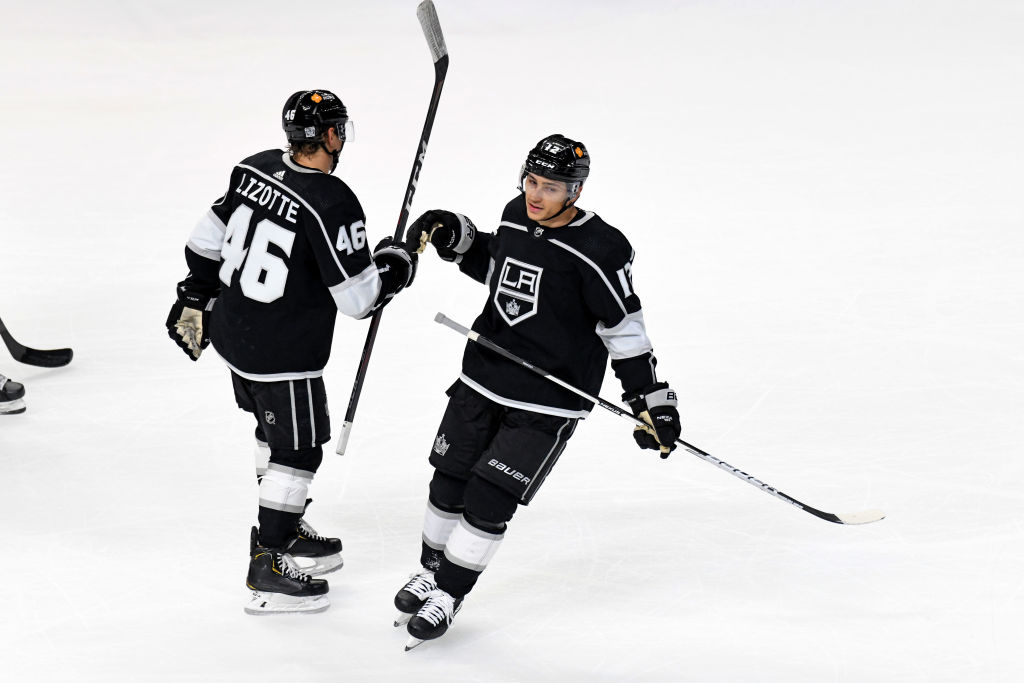 We’re one day away, Insiders!

The Kings were on the ice for the final day of practice before Opening Night, applying the finishing touches to their preparation for tomorrow’s game against Vegas.

Depending on how you look at it, there are pros and cons to that. On the one hand, Vegas already got those “opening-night kinks” out of the way yesterday and are not playing in their first game of the season, with new personnel and potentially new systems being implemented for the first time. On the other hand, Todd McLellan and his staff now have a full 60 minutes of video on their opponents, whereas Vegas does not have the same on the Kings.

“I wish we would’ve played last night,” McLellan said. “I think that any time you can get at least one game under your belt, you’re further ahead, but that’s okay though, we’ve got to play our first at some point.”

Speaking with Anze Kopitar he wasn’t necessarily leaning one way or the other in terms of whether it gives one side the advantage. With the consistency in personnel for the Golden Knights, he’s seen them before, and feels he knows what to expect from tomorrow evening’s opponent.

“We’ve played against each other enough, when you know what’s going on, I don’t think there are going to be too many trick plays out there,” he said. “You could look at it both ways. They’ve got a game under their belt, a real game and we’re sitting, watching, but also getting hungrier to start the season. It’s a coin toss.”

Regardless of the situation against their opponent, the Kings are focused on their own game and their own alignment heading into today’s game. On the injury front, the Kings were still without forwards Lias Andersson and Andreas Athanasiou, but with defenseman Olli Maatta back skating, as he has been, though as of this time, Maatta remains on injured reserve, and the expectation from how the Kings have aligned in practices would be that he might not be in the lineup on Thursday regardless, with the Top 6 seemingly settled for Game 1.

Considering the status of the injured players, the top four lines, top three pairings and two goaltenders appear to be what the Kings will roll with tomorrow, but as always, we wait and see for the official day of status.

In terms of Andersson, McLellan officially ruled him out for tomorrow with a “groin injury”, indicating that it’s something that just needs a little bit of time to heal.

“As soon as it does, he will be back in the lineup.”

In terms of a goaltender for tomorrow, McLellan hasn’t tipped his hand just yet, though he did include, mostly jokingly, that “there’s a good chance Cal or Quickie will start tomorrow”. He did clarify though that there’s a “99.9% chance” that each goaltender will feature once at STAPLES Center over the next three days.

With a long season, McLellan has enforced the point that both Cal Petersen and Jonathan Quick will play games. The hope is that Petersen will stake a claim to more games through his play, and that Quick will seek to not lose his own grip on the net through his own play. In a best-case scenario there, we’ll still see a split in net, with the importance of both to the team. A timeshare, with both goaltenders pushing for the net, benefits the organization as a whole.

Fourth Line Identity
While sometimes under-thought about, the fourth line for the LA Kings has seen the most amount of traffic, and turnover, throughout training camp.

McLellan has preached an ability to change the identity of that fourth line based on the personnel in the lineup. Some nights, there might be an emphasis on physicality, others might have an emphasis on speed. Other nights, a PK specialist might be inserted, others could see a faceoff specialist dressed.

“For us, there has to be a maintenance of momentum at least, or an increase in momentum, and how you do that is different based on individuals,” he said. “Whether it’s physicality, the ability to check, speed, some tenacity in the backcheck and turning pucks over. Different ingredients give you a different look all the time, and we feel like we have a lot to pick from. There will be nights where you need a more physical lineup, others where you need more pace or penalty killers.”

The current fourth unit looks like it’s slated to be, at least as of this writing, Lizotte at center with Moore and Lemieux on the wings. Obviously this makeup has been altered a bit due to injuries, but it’s still three players with multiple years at the NHL level, and an ability to provide different qualities to the Kings lineup. McLellan noted the other day that he values Lemieux, and what he brings here with a fresh start this season, while Lizotte and Moore have proven to be effective in different roles.

If that line is together on Opening Night, McLellan wants to see, first and foremost, that group play with tenacity. With the three members on that unit today, that seems to be something he is comfortable with.

“We have some tenacity on that line. Obviously Lizzo is on the puck all the time, and he gets knocked around a bit but he gets right back up and he’s a pest to play against. Mooresy has that, but with more meat on his bones. He’s got a sense of finish and both of those guys can penalty kill, they’re both veteran players who aren’t intimidated to play against any team or any line. Lemieux gives us some toughness, a rugged element and some pretty good hands around the net. If that’s our opening-night fourth line, then we should feel comfortable with them on the ice against anybody.”

Talking
An interesting subject of conversation over the past few days has been, well, conversation.

We heard Drew Doughty speak about it yesterday, and how much he appreciates the level of talking that Mikey Anderson does on the ice as his defensive partner. Today, we spoke with Anderson about it, and then Todd McLellan, with incrementally increasing views of broadness.

Doughty praised Anderson for his communication abilities as a younger player, Anderson talked about why he feels talking is important and McLellan spoke to the growth he’s seen from his defensemen as a whole on their talking abilities.

HEre’s what all three had to say on the subject.

McLellan – My biggest concern about the quietness came on the blueline. [Drew] can cover for about seven guys, with as much as he’s talking and how vocal he is, but the others had been, in the past, very quiet. I see Walker and Roy starting to talk a little bit more and Mikey Anderson is a vocal guy. Toby, we’re trying to draw it out of him and I think Edler has the experience. There’s much better communication and more talking going on back there than in the past.

Anderson – I think there’s a happy medium. You want everyone to be engaged and some guys are going to be more vocal than others, but when you’re on the ice, that’s the big key, everyone needs to be talking. It makes everyone’s life a lot easier, knowing where your guys are, what they want you to do with the puck, in the locker room it’s talking about certain plays now and then. For me, I’ve always been a guy that gravitates towards talking, having noise, I’d rather have something going on. On the ice, it’s getting everyone on the same page and it makes everyone’s job a lot easier.

Doughty, on Anderson – He talks a lot. All of the d-men that I’ve had a good relationship with are talking with each other. I think even you guys up in the press box can hear us, me and Mikey talk so well. For a young guy to do that, so early in his career…most of them don’t do that, and there are a lot of veteran players who still don’t do that. For him to talk to me, talk to other players on the ice, I can’t even explain how much of a help that is and I love playing with Mikey.

Hear the full interview with Anderson below, with the audio from his interview today.

We’re one day out, Insiders! Coming up later tonight will be a broader picture view, including several comments from Rob Blake, who spoke with the media in a formal interview yesterday.

By Zach Dooley
152 Comments
Behind the Scenes