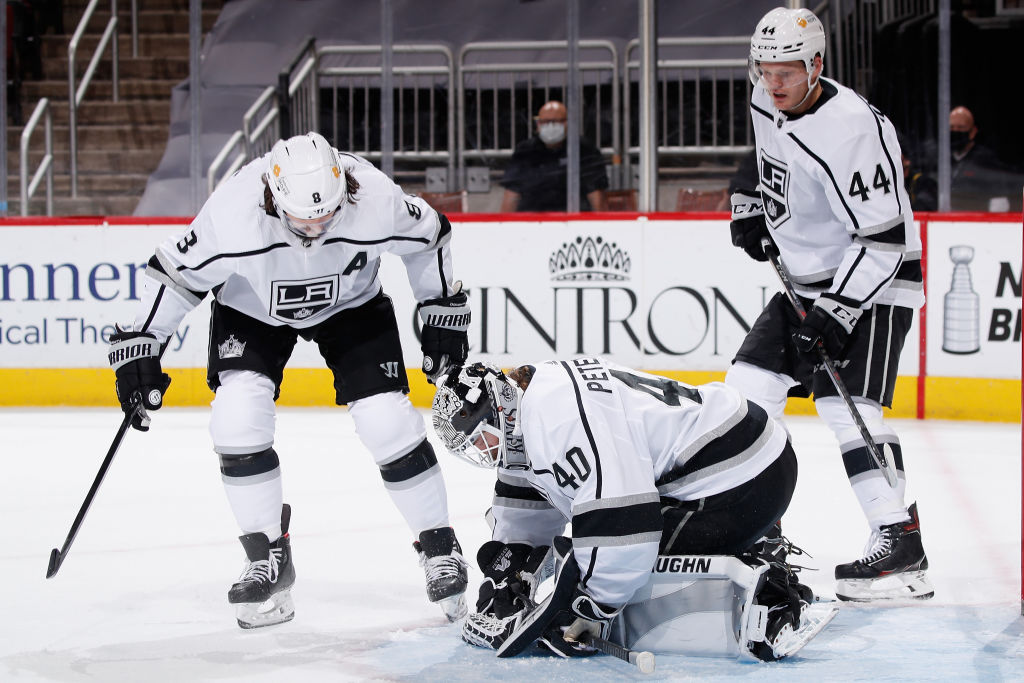 The Kings hit the ice for the second of three skates this week in advance of opening night, with an eye on Thursday’s home opener against Vegas. The big news from a headline perspective this morning was the announcement of the opening-night roster, though if you’ve been following along here with our day-to-day updates on LAKI, the expected roster isn’t necessarily surprising.

The status of injured players remains something to keep an eye on over the next couple of days, mainly the status of forward Lias Andersson. Andersson is currently day-to-day, but Todd McLellan expressed hope yesterday that he might still be an option for the home opener two days from today, and he was included on the opening-night roster announced this morning.

Andersson skated during the early portion of today’s practice but did not finish the skate, leaving 15-20 minutes in. Unknown at this time if this was prescheduled, or unexpected, and we’ll look for a further update on his status tomorrow.

Listed below is how the Kings started the skate, including Andersson amongst the 14 forwards, plus eight defensemen and two goaltenders for the Kings this morning, with an identical alignment to what we saw yesterday. For reference, here’s that lineup –

From the time that Andersson finished his skate, Arthur Kaliyev moved in with that line from that point forward in the practice, in the same position he filled in at yesterday.

Considering the status of the injured players, at this time, the expected lineup for the game against the Golden Knights is still a bit up in the air, mostly surrounding Andersson. Not knowing how the next 48 hours will go obviously, that appears to be the expectation here.

Freshmen To Sophomores
As the pair of Mikey Anderson and Tobias Bjornfot enter their second season here in the NHL, the expectations surrounding them, and ideally the contributions they are capable of, increase.

As rookie players, both Anderson and Bjornfot were pleasant surprises for last season’s LA Kings, claiming the top two slots on the left side of the blueline. Anderson formed a solid pairing with Drew Doughty, while Bjornfot was a regular alongside Matt Roy. Both pairings have, so far, carried into training camp and now practice this fall, with the expectation that we will see them in action on opening night on Thursday.

Speaking with Drew Doughty this morning, he’s been through this situation earlier in his career, and understands that perhaps the pressure and the expectations on those players are enhanced, now in their second season. He had no doubts though that both Anderson and Bjornfot are ready for it.

“Yeah, the second year is always harder,” Doughty said. “In your first year, you’re expecting to perform but you’re a rookie and you get away with a lot more of the little things. Maybe, at times, the coaching staff isn’t as hard on your mistakes, but now they’ve shown us what they can do and everyone is going to expect more of them. Sometimes, guys can feel that pressure, but I know these two players in particular thrive under the pressure and I know they’re going to perform well this year. Yeah, they are expected to grow off of last year and I feel like they will do that.”

Todd McLellan doesn’t necessarily believe in the “sophomore jinx” as it was phrased to him.

He certainly expects more of his two younger defensemen this season as opposed to last, as he did with Matt Roy and Sean Walker before them. Anderson and Bjornfot have had an inaugural tour, though just against seven opponents last season, and this will be their first go at an 82-game campaign.

Looking at the pair, McLellan felt that Anderson has been his steady, “never too high, never too low” self throughout camp, though Bjornfot got off to a bit of a slow start, which he is now working his way back from. Both players are different with regards to their makeup, but similar in the sense of enhanced expectations.

The reason, in McLellan’s mind, that people use the term is that expectations are now enhanced on players like Anderson and Bjornfot, who are now in more established positions.

“That sophomore jinx, I’m not sure I buy into it,” McLellan said. “I think what happens is that expectations go up for each individual. They either live up to them or they don’t and that’s what occurs and their games have to progress so that they do live up to them.”

Just How We Drew It Up
Shifting the focus from one end of the spectrum to the other, from the young guns to Doughty, the Norris Trophy winner remains excited and optimistic about the season ahead. Doughty has been impressed thus far with how the summer acquisitions have settled in and he doesn’t feel there’s much more needed to integrate them into the full group.

Through day-to-day things in practice, and moments in the exhibition games, Doughty feels like the reinforcements he asked for heading into this season are up to speed and ready to roll.

“I know they’re good adds, I never had a doubt in that, but they’ve impressed me a lot during exhibition season and in practice every day,” he said, of the team’s newest acquisitions. “They fit in with the group great, they’re all great guys, we can all hang out off the ice together this year, which is key in bringing in new guys and making them more comfortable. I don’t think much more time is going to be needed, I’m already used to seeing what they do, what they’re capable of, all three are great players, veteran players, I think it’s been an easy transition for them.”

In seeing how the group has come together here in the early weeks of the season, Doughty pointed out the importance of getting off to a hot start to getting that good feeling going right off the bat.

While highlighting things like getting the power play going early, and being tighter defensively, Doughty took a bigger picture approach of getting these things in order right off the hop to start the season.

“Getting off to a hot start, we have a tough matchup right off the bat against Vegas, and we’ve got to get a win there and get ourselves feeling good about where the team is going and with each other,” Doughty said. “Areas to improve, we want to get the power play rolling like it was at the beginning of last season, and all of the other areas, improving those. I think we gave up way too many goals at the end of last season and we’ve got to fix that. Really, improving in all areas, have everyone feeling good and get a little bit of a roll going.”

Doughty is expected to continue to lead the charge for the Kings, as a defenseman who is expected to be one of the best players at his position around the league. Doughty is a leader for the Kings on and off the ice, and any thoughts at this stage of potentially changing his role are premature.

For Doughty – and Anze Kopitar for that matter – their roles are still to be “driving the bus” for the Kings, with a new level of excitement driving the veterans on this team heading into the season.

“I don’t think our roles change too much, we’re leaders on this team, we’re expected to be at the top of our positions every night and we expect ourselves to be that too,” Doughty said. “I don’t see too much changing. Continuing to work with the younger guys, make them feel comfortable, any questions they have, helping them out on and off the ice. I don’t see it changing too much, maybe just putting the foot on the gas pedal a little bit more, now that we have team that can compete for a playoff spot in my mind. It makes it exciting for us and we’re looking forward to driving the bus for us.

For Pete’s Sake
Lastly, hear from goaltender Cal Petersen from this morning. The newly resigned Iowan spoke with the media today on his preparation with goalie-specific drills, his thoughts on the improvement of the group so far this preseason, his excitement of getting back to a more normal schedule and a couple of notes on his goaltending partner, Jonathan Quick.

By Zach Dooley
73 Comments
Behind the Scenes