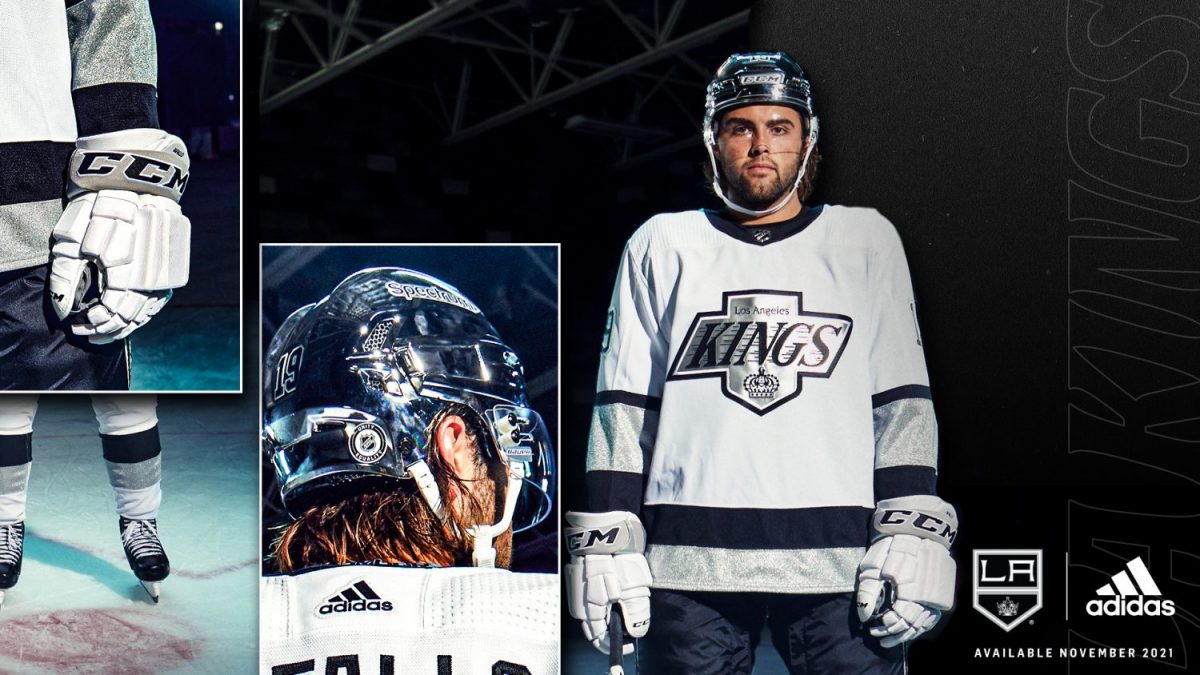 The team officially unveiled a new member of the jersey family this morning with a nod to both past and present. More on the new look from the team below, from the organization’s official release –

The LA Kings today unveiled their new LA Kings Authentic adizero Primegreen Alternate Jersey. As an alternate jersey it is scheduled to be worn 15 times this season beginning on November 17 as part of the Kings-Washington Capitals contest at STAPLES Center.

The jersey will first be available for purchase that day at the Team LA store at STAPLES Center and online at teamlastore.com. Fans are encouraged to visit lakings.com/alternate to sign up to receive information prior to the on-sale date.

The Authentic adizero Primegreen Alternate Jersey reintroduces the Kings’ 90s logo that was so important to this city and overall pop culture as a permanent alternate mark. The crest and stripes have a full proper silver material to them to honor that the club’s primary colors truly are Black, White and Silver.

Combined with the chrome helmets originally debuted at the Kings-Colorado Avalanche Stadium Series game in 2020 in Colorado Springs and white player gloves, it is a fresh, new modern look to the whole kit which also includes a special 90s Era logo patch on the player’s pants.

“The feedback from our players – current and past players – is they universally love this sweater,” said Kings President and Hockey Hall of Famer Luc Robitaille. “Along with the strong sentiment from our fans, it was really a no-brainer for us to continue to highlight the logo, to highlight the jersey.”

Said Kings Chief Operating Officer Kelly Cheeseman: “This is an announcement we have been very much looking forward to. There is a large demand by our fans to see the uniform on the ice and to wear this merchandise in our community. We continue to be identified by this classic logo, this iconic brand in pop culture and beyond, so we felt it was imperative to continue re-incorporating it into our marketing efforts.”

The Authentic adizero Primegreen Alternate Jersey – made with Primegreen, a series of high-performance recycled materials – is a full and permanent refresh of the original 90s Heritage Jersey. The Authentic adizero Primegreen Alternate Jersey features a similar look and refreshed primary logo the Kings debuted in 1988 and wore for 10 seasons (1988-89 through 1997-98) after both were famously unveiled on August 9, 1988 when the Kings held a major news conference in Los Angeles to announce the acquisition of Wayne Gretzky from the Edmonton Oilers.

The jersey represents the third time in 14 years the Kings have produced product relating to their heritage. The Kings this season will not wear their adidas Silver Jersey, adidas Reverse Retro Jersey or ‘90s Era adidas Heritage Jerseys. The new jersey joins the club’s Home Black adidas Jersey and Road White adidas Jersey rotation for the 2021-22 season as the club returns to full capacity at STAPLES Center beginning this Thursday with the club’s season opener versus Vegas.

The Kings-Golden Knights season opener on October 14 kicks off a two-game homestand that concludes with a game against the Minnesota Wild on October 16. The Kings then embark on their first road trip of the year, a four-game set that begins on October 19 at Nashville.

Thursday’s game begins at 7:30 p.m. and fans are encouraged to be their seats early for pre-game Opening Night festivities. The contest will be broadcast on Bally Sports West and the LA Kings Iheart Audio Network with pre-game shows.