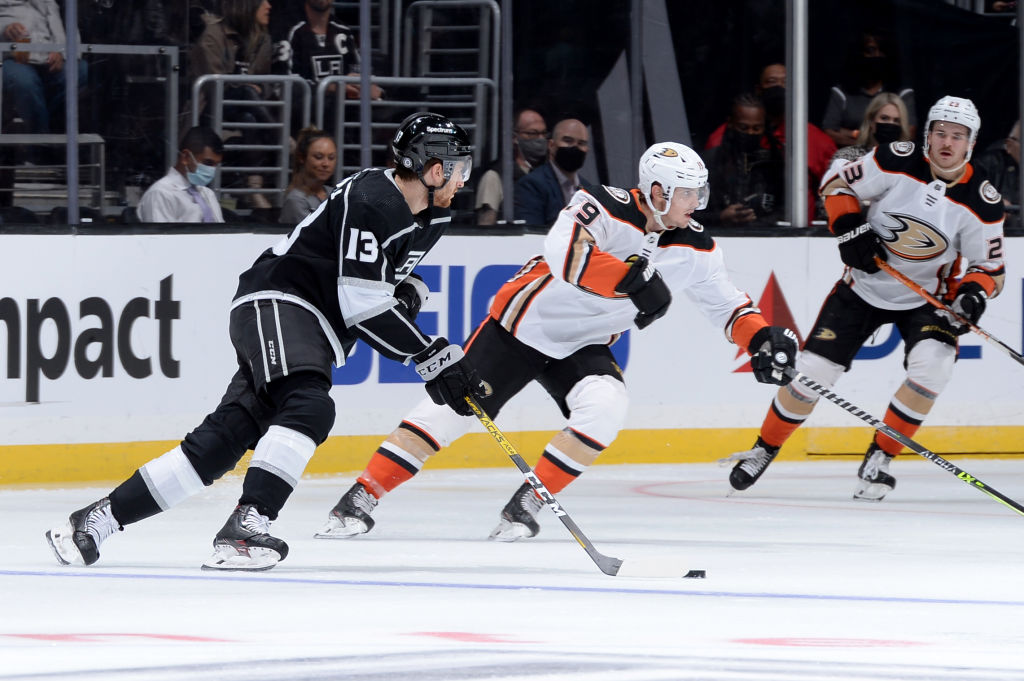 Tonight’s game was one where preseason felt like it never wanted to end, as the Kings and Ducks played a full 65 minutes, plus a shootout, with Anaheim eventually coming out on top by a 4-3 margin.

The Kings got two goals from Gabe Vilardi, in addition to one in the shootout, while Vladimir Tkachev (1-1-2) and Sean Walker (0-2-2) each tallied two points as well in the defeat.

After a bit of a disjointed start to the game, Anaheim got on the board first through Trevor Zegras, who got a deflection on a Kevin Shattenkirk shot and beat Kings netminder Jonathan Quick through the five-hole for the game-opening goal.

The Kings battled back, with goals from Vilardi on either side of the first intermission, to put the hosts ahead by a goal. First, the Kingston, ONT native got to the front of the net and buried a Vladimir Tkachev rebound to knot the score at one late in the first period. Then, less than five minutes into the middle stanza, Vilardi struck again with a shot from the top of the slot that beat Ducks goaltender John Gibson high on the stick side for his second of the night and third of the preseason.

Anaheim came back with a goal of its own less than four minutes after Vilardi’s second, as Adam Henrique beat Quick from the left-hand circle to tie the game at two.

The teams traded power-play goals just 65 seconds apart in the early stages of the first period to push the scoreline to 3-3. First, Tkachev fired home from the left-hand circle, as he cleanly beat Gibson, to make it 3-2. With Anaheim on a 5-on-3 advantage shortly thereafter, forward Max Comtois capitalized from close range to even the score at three.

After a scoreless overtime period, the Ducks scored twice in the shootout, with Comtois tallying the game-winning goal, to LA’s one. The Kings conclude the preseason with a 3-3-1 record.

Hear from Walker, Tkachev and Head Coach Todd McLellan below.

*Note – Kings forward Lias Andersson left the game in the second period with the lower-body injury and did not return.

On getting to know the team a bit here in the preseason
It’s good. Everyone is good [to the] new guys and I like it here.

On if he feels he’s adjusting to the speed of the game
Yeah for sure. After two weeks and after training camp, I’m trying to [create] more speed. It took some time, a little bit, but now it’s alright. Every game I feel better.

Todd McLellan
On his overall thoughts from tonight’s game
I thought as a collective whole, we weren’t very good early. We were slow, we were sloppy, we didn’t pass, we didn’t connect, we fell behind in shifts. As the night wore on, we got better, so there’s some concern about that and that’s the whole group, not individuals. It also hasn’t been a very easy camp for some of our veteran players. We’ve had a lot of players in camp, we’ve been practicing with five lines, their reps and rhythm isn’t what it normally is. Unfortunately Lias got hurt tonight and I think that helped actually. It allowed us to play our guys a little bit more, Kopi started to get his legs going, Arvidsson started to get going, Danault’s line, Gabe got in it a little bit more, all of the lines got going. In this week of practice, it’s going to be big for us, because we’re going to run four lines and the reps are going to go up, we’re going to have some pace. I think it’s going to feel more normal for them.

On if he thinks he’ll keep Trevor Moore at center moving forward
I like Trevor on the wing. Not that he played poorly in the middle tonight, he didn’t get a lot of time in the middle, but as soon as he went back to the wing I thought we saw him become more effective. We saw him take the puck to the net, I like him better there, but we know we have that in the toolkit if we need it.

On Viktor Arvidsson and his ability to get into high-danger areas on the ice
I think that, again, with the timing and the rhythm, we gave a group of players, Iafallo, Brown and Kopitar that have played together for a long time and they’re not together anymore, which is okay. It takes a little while for a new player to fit in and get accustomed to what may or may not happen on the ice. Then, Alex goes down and plays with Danault and Kempe and that’s a whole new line, it will take a little bit of time. Arvi started slow I thought, like everybody else, but after that I thought he was dangerous. Great entry, Brownie to Arvy cross-ice, Gibson made an outstanding save, he took the puck to the net a few times. I thought he was dangerous offensively. He didn’t get rewarded, but he was.

On the Alex Edler – Sean Walker pairing
I liked that pair. They complement each other well. Alex, real good gaps tonight, broke plays up, good on the penalty kill, long, rangy reach in the d-zone and he cleared the crease well. That allows Walks to roam a little bit and use his asset, which is his legs, he jumped into the rush. I thought a real good, complementary pair.

The Kings have a scheduled team off day tomorrow, and will return to the ice on Monday afternoon at 11 AM at Toyota Sports Performance Center.