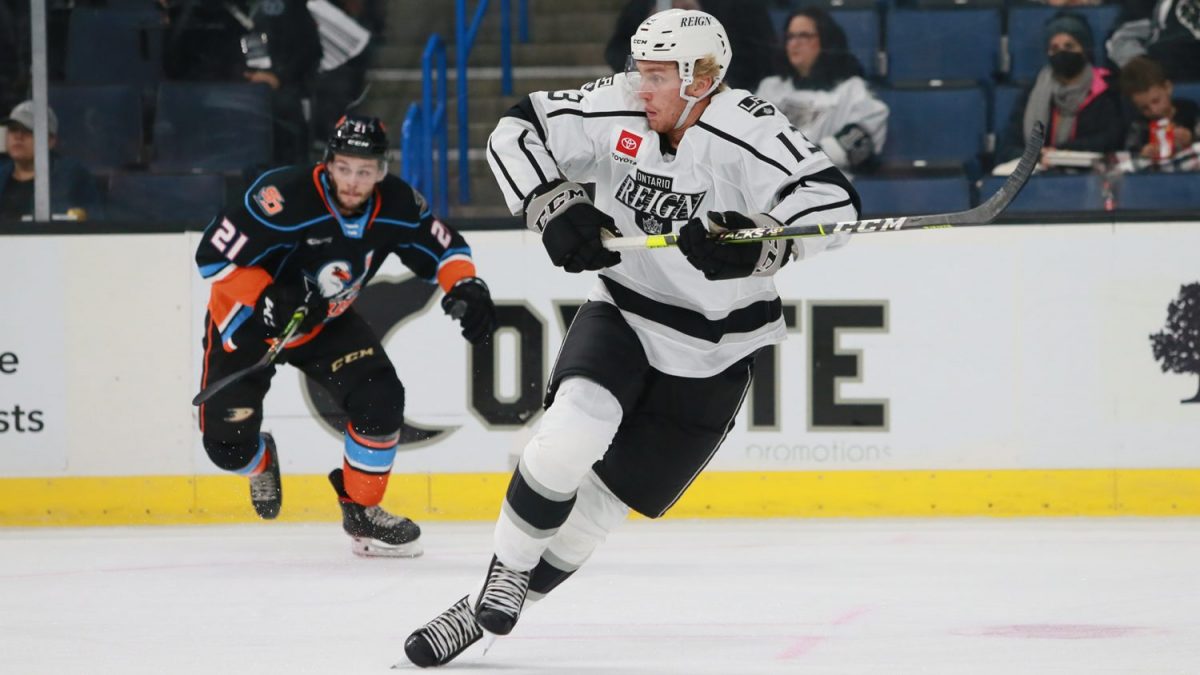 The San Diego Gulls came away with a 4-2 win in preseason action over the Ontario Reign Thursday night at Toyota Arena. After a slow start in a scoreless first period, the Reign came from behind in the second with goals by forward Aidan Dudas and defender Jordan Spence to take a 2-1 lead. But San Diego evened the game at 2-2 on a breakaway goal by Alex Limoges and then took the lead just over three minutes later when defender Brogan Rafferty netted the game-winner.

More from Dudas and Head Coach John Wroblewski below.

While trailing late, the Reign pulled goaltender John Lethemon for an extra attacker in the final minutes but came up short and allowed an empty-net goal to Vinni Lettieri who sealed the win for the Gulls.

Netminder Jacob Ingham started the game and played the first half of the contest for Ontario, stopping all 20 shots that came his way. Ingham made one regular-season appearance for the Reign last season, turning aside 34 shots in a 6-2 win over Tucson.

Lethemon took over near the 11-minute mark in the second and finished with 15 saves, including a few solid stops late in the game to keep his team within striking distance.

Ontario started slow in the first and was outshot by San Diego 15-6 in the opening 20 but neither team was able to get on the scoreboard.

The Gulls struck first at 9:53 of the second on a goal by Jacob Perreault, who redirected a puck up and over Lethemon, a weird bounce off a shot by Nikolas Brouillard that made it 1-0.

Dudas responded at 12:05 for the Reign, scoring on the team’s only power play opportunity of the night after a nice seam pass by forward Brayden Burke. Defender Helge Grans registered the second assist on the play.

In the final minute of the middle frame, Ontario captain Brett Sutter won a faceoff in the offensive zone to forward Johan Sodergran, who put the puck toward the net. Spence got his stick on the chance and the puck changed direction enough to slip past Gulls’ goaltender Olle Eriksson Ek.

The third period, however, belonged to San Diego, who potted three straight tallies on their way to the win. Limoges capitalized on a breakaway with a great move to beat Lethemon at 6:20, before Rafferty’s shot took a bounce off of Spence and in at 9:30. Spence was positioned at the side of the net looking for a clear, but it glanced off of him and into the net.

Fans in Ontario were treated to two fights in the contest, with Dallas Gerads and Hunter Drew doing battle in the opening period before Jacob Doty dropped the gloves for a marathon bout against Morgan Adams-Moisan in the middle frame.

The Reign will have a practice day on Friday at Toyota Sports Performance Center before an off day on Saturday and another practice Sunday afternoon. Ontario will complete their preseason schedule on Monday night against the Gulls in Anaheim at the Honda Center.

Aidan Dudas
On what his goal does for his confidence during the preseason
It’s a lot. I’ve been working on my shot all summer and doing what I can do to get better every day and it gives me a lot of confidence going into the next game and into the season.

On his relationship and discussions with Coach Wroblewski
We were texting throughout the summer and he was obviously really excited for this year and the opportunity that not only I will get but many other players on the team as well and we haven’t really had a sit down talk here in LA yet but we had a lot of conversations over the summer.

On the competition among players on the roster in camp
I think it’s good. There’s a lot of competition within the organization and it brings the best out of everyone and I have to bring my best every single day to show them that I can play each and every night and I think it’s good for everyone.

John Wroblewski
On playing at home inside Toyota Arena
It was great to see the fans in here and it wasn’t a full house by any means but you could feel the presence. I wish we would’ve gotten off to a quicker start, credit to San Diego, they played a great first period and really came out with energy and we looked like it was an exhibition game. They were more refined, a little more fine tuned and they earned the win today.

On the play of TJ Tynan
His buzz, it just didn’t connect a few times. He puts himself in the right spots of course his motor just never stops and so a lot of that is him timing the system and him timing the players that he’s going to be around so that will be critical for our team’s success is for him to get his timing going and he was around it but it just didn’t quite connect tonight…I love the way that he takes charge, he’s good on the bench, almost an extension of the coaching staff, positive yet stern, really a key addition and a great leader.

On the play of Aidan Dudas
I think that we’re always going to be looking for him to be a secondary scorer in his pro career but at the same time, his identity is going to be about being a 200-foot momentum player so anytime he chips in offensive and he does have a very crisp shot, he’s got vision, he’s got enough skill to make plays but we want to make sure his calling card is that buzz, making sure you’re an impact every single shift whether you have the puck on your tape or not. We’ll keep working it with him but we’re happy with where he’s at.

On the team getting going after a slow start
In the first period I don’t think we stalled San Diego out once on the forecheck and that’s really the calling card. If you can’t get any time in the offensive zone and they’re coming out organized with three men on the forecheck, we started to get to it a little bit in the second period when they would only have one or two guys on the forecheck because we did get some sustained time, we did make a couple adjustments between the first and second with just our angling and what our purpose was from F1 and 2 and 3. I think the power play goal, we draw a penalty because of that and the goals we got in the second were secondary to the momentum that we had started to create.