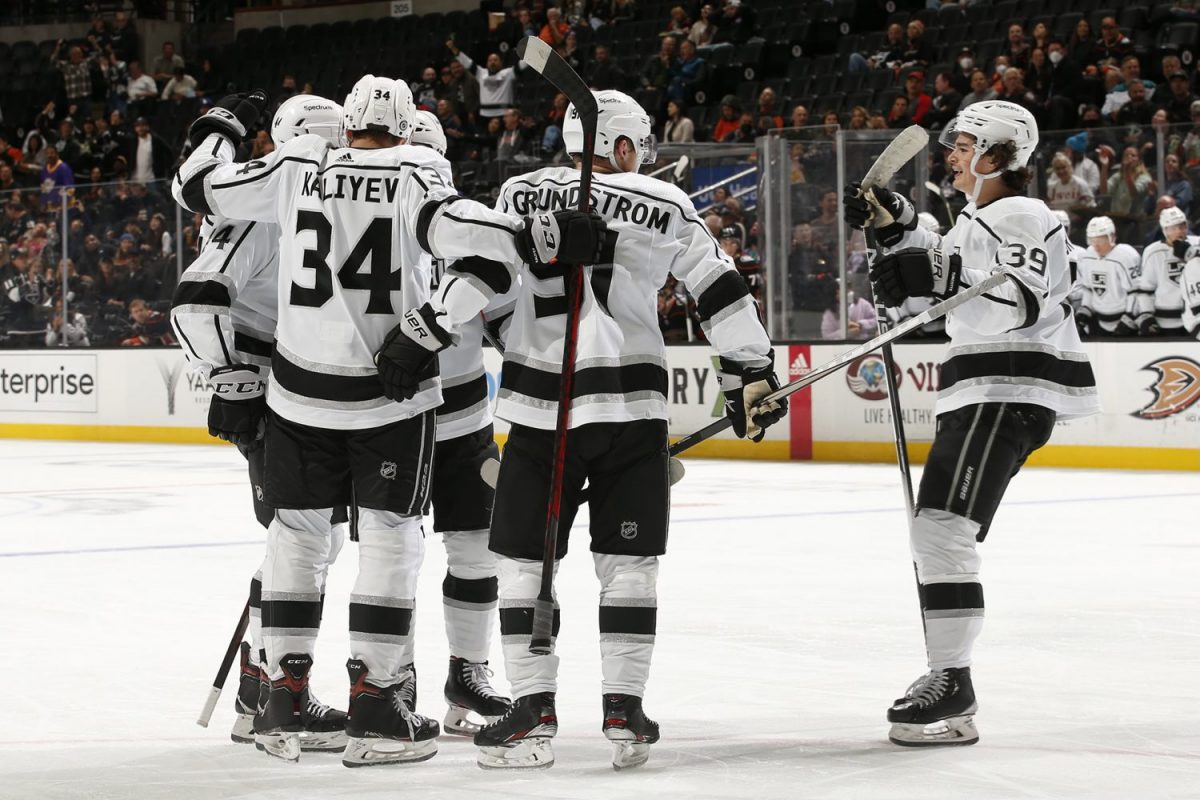 The first 19 minutes of tonight’s game saw the play slanted towards the Kings defensive zone, with Anaheim generating first, second and third looks consistently. The scoreboard read 3-0 in favor of the home team. Then, the Kings flipped the script a bit in the final 41 minutes, scoring once at the end of the first, twice in the second and three times in the third, eventually winning 6-3. Such is life in preseason hockey.

Arthur Kaliyev collected a hat trick in the victory, after he was recalled from the AHL earlier in the day. More on Kaliyev, and from Kaliyev, below.

As noted, the Ducks struck early and often in the first period, including two goals in the game’s first 3:41. First, Nicolas Deslauriers buried a loose puck in front of Cal Petersen’s net just 2:32 into the game, with Jacob Silfverberg doubling the advantage 69 seconds later on a collected finish off of a rebound.

After the Ducks made it 3-0, courtesy of a Rickard Rakell finish in front, caused by a Kings defensive-zone turnover, Austin Wagner pulled a goal back the other way, with an impressive individual effort. Skating onto a puck flipped into the neutral zone, Wagner used his skating ability to chase down a loose puck, fly around Anaheim defenseman Jamie Drysdale and finish on the backhand, to get the visitors on the board with exactly 60 seconds left in the opening frame.

The Kings took their first lead of the evening 4:12 into the third period, with the kids cashing in again on the power play. After a great passing sequence, forward Alex Turcotte got to the net, and his shot snuck through Stolarz and over the line for his first of the preseason. Brendan Lemieux got in on the action with his second goal of the preseason, after he won a net-front battle to get the puck and put home his own rebound, before Kaliyev completed the hat trick into the empty net.

The Kings will have a full-team off day tomorrow, before returning to the ice on Friday.

Arthur Kaliyev
On his mentality tonight, after being recalled for tonight’s game
I just went out and tried to play my best out there. I wanted to just play hard every shift and see what happens.

On getting rewarded tonight for the work he’s put in throughout camp
Yeah, I really felt that I was getting those chances, they just weren’t going in, and finally we got lucky enough where some of them went in. I got back to my game a bit, and I’m starting to feel good.

On the turning point in tonight’s game, resulting in the comeback
I thought that Wags’ goal at the end of the period was huge, because we were down 3-0 and that one goal was huge. Having a two-goal deficit heading into the second, we kept the pressure on them and then we got rewarded with the goals. Todd was not happy after the first period, and we came out, played harder and more physical in the second and third.

On finding success with Alex Turcotte tonight
It was awesome. I’ve been playing with and against him since I was 10 years old, it’s been pretty good so far. I like playing with him, I think we have good chemistry since we know each other so well, hopefully we can keep it up. It was really nice [to see him rewarded]. He was working hard the whole game, winning battles and playing good d-zone.

Todd McLellan
On if the first goal helped to calm things down, and the overall bounce back after the 3-0 deficit
It certainly helped, it calmed things down a little bit, but I think the intermission was probably a lot more important than the goal itself. Our group, first of all, looked at our lineup and the other team’s lineup and I’m not sure they gave themselves a chance, which is wrong to begin with. Then, we were a little bit rudderless I thought, and we had to explain to the group why they were here. We were looking for some leadership from the veterans that came and played, we didn’t get that early in the game, we got it after. We were giving numerous players second and third opportunities to try and work their way into the lineup. Did some of them do that? Maybe. Some probably played themselves off, but they needed to understand that it wasn’t just another exhibition game for them, and that’s how they were playing in the first period.

On if the first goal helped to calm things down, and the overall bounce back after the 3-0 deficit
Arthur had a great night. There’s going to be a lot of talk about the goals he scored, and they were nice goals, he put himself in a real good position, but shift after shift, he was positioned well, he made good plays along the boards, he managed the puck well, he used his size when he needed to, I don’t recall him [making an error] defensively at all. A lot of other attributes to the game that are really important that came into play tonight in his game, and guess what, he was rewarded. That’s a really good sign for him and for us that he’s picking those things up.

On the importance of players fighting for bottom-six roles bring those non-scoresheet qualities
They’re essential. Let’s face it, there are very few third or fourth line players that score 50 goals, but they play 12-15 minutes a night and they have to be able to prevent, they have to have good board work, they have to be good around their net, they might be a faceoff specialist, they have to block shots, they have to manage the game well. Arthur, and others, have come a long way in those areas already and certainly his time in the American League helped him, we saw it with Quinton as well. From last year when we started, they’ve grown a lot since then.

On if tonight’s game altered the picture of the opening night roster he had coming into tonight
It’ll come down to construction of lines. How we want to play individuals, do we want a bigger lineup, a smaller lineup, penalty kill and power-play situations. We have the depth in the organization, and I know that we’re going to have to take advantage of it throughout the year. If a certain individual isn’t with the big club to start, it doesn’t mean he’s gone and forgotten, there’s a good chance that he might come up and never go back again, and vice versa. For a lot of them, don’t think that you’re here to stay, you’re here to earn your keep night in and night out. We still have one more game to play, and we’ve got a week to formulate what our roster might look like. We have to take into consideration injuries, Athanasiou and Maatta, they haven’t played very much, but they’re important parts of the team. Quinton Byfield, in my opinion, had earned a spot unless something dramatic happened in his play, but there’s another injury. Injuries will open up opportunities for some and they may never give it back. One man’s misfortune is another man’s opportunity to take advantage of it.

On any communication he’s had with Byfield since the injury
I saw Q in the morning, he hadn’t been through all of his tests and whatnot, but he was in pretty good spirits. He was around the rink and around the guys, which was good.