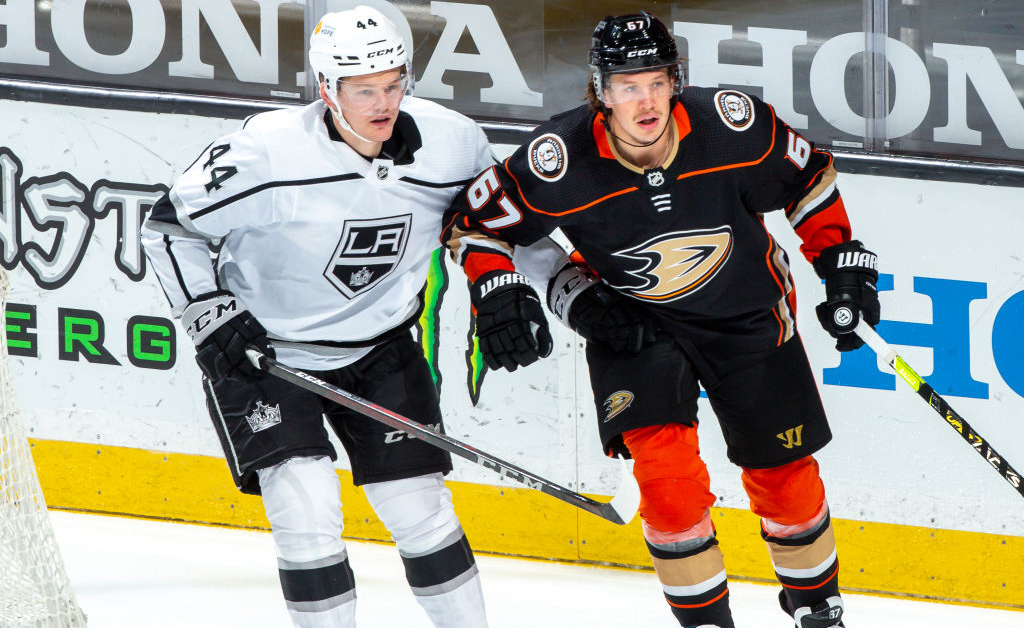 TONIGHT’S MATCHUP: The LA Kings hit the road for their final away game of the preseason, with a trip to Anaheim on the docket for this evening. Tonight marks the second-to-last exhibition game for the Kings in 2021, before we begin the regular season next week.

HEAD-TO-HEAD: The Kings and Ducks will square off twice in four days, beginning this evening at Honda Center. The teams will also matchup on Saturday at STAPLES Center, which concludes the preseason for the Kings. Forward Adrian Kempe led all LA skaters last season in the head-to-head matchup against Anaheim with six goals and nine points, but he appears unlikely to feature this evening, based on today’s morning skate.

KINGS VITALS: First things first, the Kings recalled four forwards this morning to the NHL roster – Jaret Anderson-Dolan, Arthur Kaliyev, Rasmus Kupari and Alex Turcotte. Todd McLellan indicated earlier this week that these types of moves were a possibility, considering the back-to-back, so there are no real surprises here.

McLellan indicated that his preference is to not play his veterans in back-to-back games during the preseason, and these moves give the Kings flexibility in that department.

“Back-to-back games are not always ideal in exhibition season,” McLellan said. “We have to manage some of our players, and the amount that they’ve played, it’s been two years since anybody has played 82 games in a Kings jersey, almost three years now, so we have to manage players. We don’t want our older players playing back-to-back at this point, so we have to fill the lineup, and that’s a great opportunity for whoever gets that chance, to maybe have one hell of a night and either change our mind or confirm our minds.”

After making these four additions, the Kings have seven forwards and two defensemen who are on the roster and can check in tonight. This morning, we saw a veteran group on the ice late, with an apparent game group leaving the ice on the earlier side.

With that in mind, here’s a projection at what we could expect to see in Anaheim.

If we’re looking from the lens of resting the veterans tonight, that gives that group the evening off, while also replacing forward Quinton Byfield, who departed yesterday’s game in the third period with a lower-body injury.

Per the Kings, Byfield is “week-to-week” at this time with a lower-body injury, which naturally rules him out for tonight’s game. Veterans Olli Maatta and Andreas Athanasiou were previously ruled out tonight with respective injuries, with the hope that Maatta is perhaps available by the weekend.

In net, expect Cal Petersen to get the start, his third of the preseason. After Jonathan Quick saw his first full contest of the preseason yesterday against Arizona, we’ll see Petersen likely in line to do the same here this evening versus the Ducks.

Ras On The Right
The Kings entered this season with a wealth of options at the center position. If you count players who played NHL games last season, between the Kings and other organizations, you’d have a legitimate eight options, and that’s not including someone like Alex Turcotte, a center by trade, who spent the entire year at the AHL level.

General Manager Rob Blake has hinted several times that, eventually, someone will have to move to the wing to get more players into the NHL, while indicating that it’s naturally easier to move a player from center to wing than from wing to center.

“When we look at it, especially when we’ve drafted so many centermen over the years, any team I’ve been involved in, I’ve seen centers go to the wing, but I’ve rarely seen wingers go to the center,” Blake said over the summer. “There’s no reason any of these centermen can’t go to the wing and find the right position. That’s kind of our philosophy that we’ve had here for the last few years. We’re going to put the best players in the lineup and we’ll filter them into the positions that are best suitable for them.”

So far this preseason that player has been Rasmus Kupari, who has skated on the right wing thus far in exhibition contests.

Kupari certainly has the toolkit to play on the wing. His skating ability, puck-handling skills and two-way acumen make him a natural option at that position and he has some experience there in the past, skating on the right wing during the 2019 World Juniors with Team Finland.

“We have tried Rasmus on the right side for a couple of games, and if he does play in one of those two games, there’s a chance he might see some time on the right side,” McLellan said. “Other than that, it should be their customary positions and roles.”

Coupe De Vil-ardi
Throughout the preseason, there has been a lot of focus on the center position, with the acquisition of Phillip Danault and the wealth of depth the organization has at the position.

As noted above, the process of potentially trying some of those players as wings has begun with Kupari, but one name who has been frequently thrown around has been Gabe Vilardi, who has spent most of training camp as the team’s third-line center. Vilardi is one of the top prospects in the organization, with his combination of size and skill showcasing his top-end talent. Last season, as a rookie, he was tasked many nights with shouldering second-line minutes, which resulted in some more difficult matchups and responsibilities.

With Danault and Kopitar now in position, Vilardi has been slotted in as the team’s 3C, and it’s been so far, so good for the young centerman.

Last night, we saw a very confident player on the ice. Look no further than the move he made at the offensive blueline to generate a 2-on-1 during the second period, or the quick feet he showcased in the practice shootout. The kind of confidence that will generate opportunities for the Kings.

Todd McLellan has been pleased with the progress he’s seen so far this fall from Vilardi, who has seemingly clicked so far on a line with Lias Andersson and Vladimir Tkachev. Seeing continued growth from his young pivot is important, and this far, Vilardi has been active in creating chances and opportunities.

“He’s had a very good training camp, I thought in the games he’s been involved in, he’s created chances for himself and for others, wasn’t a liability defensively, he’s played a calm game. He’s still got some work to do in the faceoff circle, he’s still a young player and he’ll figure that part out, but for the most part, he’s had a pretty good training camp.”

With Byfield currently out of the lineup, the Kings will be relying on Vilardi to provide contributions offensively, while continuing to see him grow as a 200-foot player. Good signs thus far.

Kings and Ducks, coming up tonight from the Ponda.