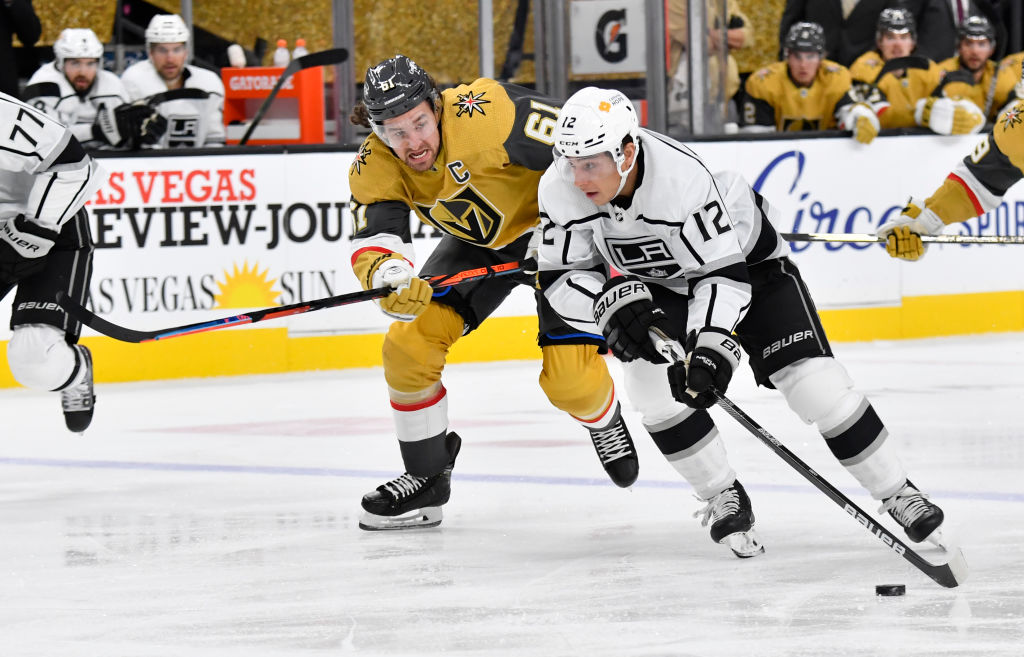 TONIGHT’S MATCHUP: The LA Kings and Vegas Golden Knights are back in action this evening at T-Mobile Arena, as they complete the second half of a back-to-back set. Tonight’s action marks the final day of a 4-in-5 for the Kings to begin their exhibition schedule.

HEAD-TO-HEAD: The two teams met just last night in preseason play, with the Kings skating to a 3-1 victory, but tonight’s game figures to have at least somewhat of a different alignment. Vladimir Tkachev led all skaters with two points in yesterday’s meeting, while Lias Andersson, Arthur Kaliyev and Brendan Lemieux all scored. Last season’s Kings scoring leader against Vegas, Anze Kopitar, could check in tonight for his 2021 preseason debut.

KINGS VITALS: For the first time this preseason, we expect to see players skating in back-to-back games. Per Todd McLellan on Wednesday, the Kings are not traveling on this trip with two, fully separate lineups, meaning that we will see at least a section of players playing tonight who also played last night.

Looking at who from Group A did not play yesterday, and who from Group B was not on the ice for the non-traveling group’s skate this morning in El Segundo, the following players would appear likely to play in tonight’s game in Vegas.

That leaves the need for five forwards and three defensemen who played last night to play again tonight. The expectation is that we’ll see more younger players play the back-to-back, rather than say Phillip Danault or Alex Iafallo. Players like Quinton Byfield and Rasmus Kupari are considered likely to feature at forward, while someone like Austin Strand should check back in on the blueline.

GOLDEN KNIGHTS VITALS: Thus far this morning, we haven’t seen any word on tonight’s Vegas lineup. What we do know is that in terms of goaltenders, Golden Knights Head Coach Peter de Boer indicated that Robin Lehner exited last night’s game earlier than expected, for “precautionary” reasons, with an injury that was deemed “nothing serious”.

Perhaps, the group we saw yesterday that was originally reported as the Salt Lake City game group will actually play tonight in Vegas. That group is listed here.

From Todd McLellan’s point of view, he’s expecting a more-veteran lineup tonight from the Golden Knights.

“Here tonight, in Vegas, we’re going to get challenged with a more veteran lineup, probably a hungrier group, playing in front of their home crowd.”

How that shakes out, we will see.

“I thought, overall, it was a strong effort from our group,” he noted. “The type of lineup that we put in, it was a competitive group that understands where we are in training camp, there’s still a number of these players that are fighting for their lives and I thought that showed up in the game. From a group perspective, we were quite pleased with the effort.”

The Kings are starting to implement some of the things that they’ve been working on throughout training camp. McLellan noted that the players are absorbing things and now putting them into practice in game settings. It wasn’t just yesterday’s game that we’ve started to see these things, but it was perhaps the most complete version of it that we’ve seen to date.

– McLellan also had positive things to say about forward Vladimir Tkachev, one of yesterday’s top performers, with a pair of assists in the victory.

“Poise, creativity, a sense of what might happen two or three moves ahead,” McLellan said of Tkachev. “We talk about players, they’re either playing chess or checkers and Tkach is playing chess for sure.”

In some ways, Tkachev’s play has been surprising to those on the outside, because of the lack of information known about him externally coming into training camp. For those within the organization, however, McLellan felt that the Kings had a pretty good sense of what he brought to the table.

The question, however, was how could he, just eight days into his time with the Kings, put his abilities into practice and impose his game. Early returns have been promising.

“Sometimes it’s tough for a young player to come from another country, in particular Russia, and be able to apply his game immediately, and we’ve seen that from him for three or four exhibition games, throughout training camp,” McLellan said. “I believe, when the opposition’s colors are different than black, white and silver, he plays even better, so we have to continue to evaluate him in the exhibition season.”

– Two other quotes from the past two days had me thinking about positional battles during training camp. Last night, Brendan Lemieux talked about how regardless of the situation, he’s out here to play his game, preseason or regular season, and whether it comes naturally or not.

“There’s definitely a less-physical aspect to the preseason, but I try to bring my game every time I play,” he said. “Sometimes it comes naturally, sometimes it’s more forced.”

The second quote was from Todd McLellan on Wednesday, when talking about positional battles during training camp. The question asked was with regards to the number of forwards fighting for the final spots on the roster, but wondering whether or not they’re fighting as a group for say four roster spots, or in smaller groups, dependent on position.

“I think there are groups of players that give you different ingredients,” McLellan said. “There’s some physicality to Lemieux, and his group, Tkachev is smaller, skilled, so there are different ingredients that come into play and we have to build a team that way. If we’re talking about the bottom six, or the fourth line, what do we want it to look like, what’s the identity it might have, do penalty killers come from that situation, are you a shot blocker, do you provide physicality, can you win faceoffs? You don’t have to be a top scorer to play, but you better bring something that you hang your hat on, and you look down the bench and say get out there and do it. If you’re just vanilla, you just do everything kind of average, I’m not sure that it’s going to work. Different ingredients will allow us to pick our roster.”

The moral of the story is that Brendan Lemieux isn’t going to stand out by trying to play like Vladimir Tkachev and Vladimir Tkachev won’t stand out by trying to play like Brendan Lemieux. Both players offer something different, as do several others currently in roster battles for these final roster spots. How the Kings ultimately construct the bottom-end of their lineup, and what they value in a 13th or 14th forward, is an important storyline to pay attention to over the next week as the roster parries down towards 23.

Kings and Golden Knights, tonight at 7 PM. Following tonight’s game, the Kings have an off day on Saturday, followed by the first NHL/AHL split of the season with the teams breaking into two groups on Sunday. Between the conclusion of tonight’s game and the start of Sunday’s practice, expect to see a larger set of roster moves as we move closer to the final roster.