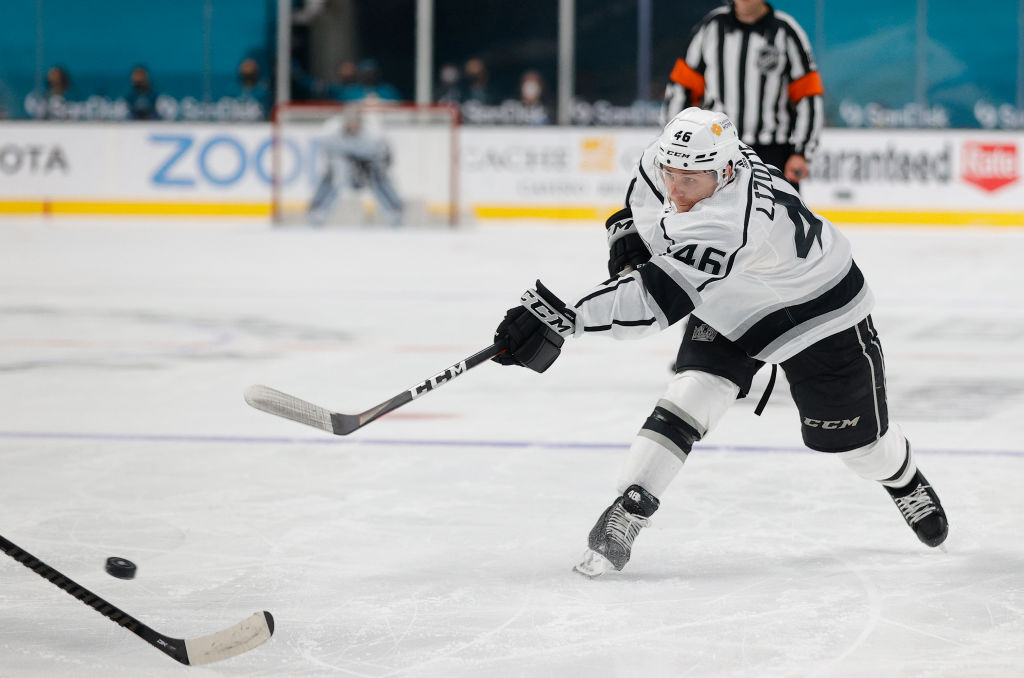 Third Period
20:00 – Third period is underway from San Jose. 3-1 Kings, who begin with a short man advantage.
18:25 – Kings will look for their first power-play goal of the preseason here early in the third, as Hatakka sits for hooking. Third PP chance of the evening for LAK.
18:01 – LAK Goal – Lias Andersson converts on the power play, as he follows up on an Alex Iafallo shot and cashes in to make it a 4-1 lead for the visitors.
16:14 – Now it’s San Jose’s turn on the PP, as Byfield sits for a hooking infraction of his own. Brent Burns leads the top SJ PP onto the ice for the fifth time tonight.
14:13 – SJ Goal – Immediately after the Byfield penalty expired, Burns brings one back for the Sharks. Shot through traffic from up high. 4-2.
10:06 – Halfway home here in the third. Shots have been just about even thus far in the final frame, with the Kings leading 7-6.
9:42 – Strand and Hertl trade roughing minors, and we’ll play some more 4-on-4….Kings already with two goals in that situation tonight.
7:17 – You just knew that Jacob Doty would look for a scrap. Drops the gloves with Mario Ferraro, and both of their nights are done early, as both get five for fighting and ten-minute misconducts.
3:11 – Kings will get a late power-play, as Bonino sits for slashing. Some keepaway would kill off two of the final three minutes, but you’d imagine in preseason action the Kings will work on their system with this group.
0:55 – Sharks will take their timeout, and we’ll see a 6-on-5 advantage here for the Sharks in the final minute.
0:40 – SJ Goal – Tomas Hertl brings the Sharks back to within a goal with less than 60 seconds to play. Redirection in front, another assist for Eklund. 4-3.
0:00 – That’s a wrap! Kings come from behind, earn a 4-3, preseason victory in San Jose.

Second Period
20:00 – Back in action for the second period! Kings begin with nearly a full two minutes on the man advantage.
18:53 – Kings get, by far, their best chance of the evening thus far, as Quinton Byfield finds some room in the slot and gets his first shot on goal of the contest.
18:02 – Kings get three shots on goal on their power play, equaling their overall total from the first period in less than two minutes of play in the second. That’s a start!
15:20 – LAK Goal – Jordan Spence! Great moment for the young defenseman, as he beats James Reimer from the top of the right circle off of an offensive-zone faceoff. 1-1.
15:19 – Our Ontario Reign contributor, Jared Shafran, was telling me all about Jordan Spence’s shot, and how he was just getting fed pucks to hammer during development camp, which I missed. Now, in an NHL preseason game, he buries on. Good for the young man.
12:24 – Shots are 9-1 Kings so far in the second period, with the only goal of the period amongst the 8. Great response, impressive fight back here from this young Kings side.
10:01 – Quick makes a pair of saves from close range on Balcers and Hatakaa. 22-of-23 here midway through the second for JQ32.
8:05 – Garret Sparks now in net for the Kings, making his preseason debut. Heck of a debut for Jonathan Quick.
5:11 – San Jose heads back to the man advantage here as we approach the end of the second period. Lias Andersson heads to the box for slashing.
3:11 – Another successful kill here by the Kings. San Jose did have their share of chances, while Austin Wagner had an opportunity shorthanded, but we remain tied.
2:07 – Kings right back to the box, as Doty and Gregor get tangled up behind the play, but it’ll just be Doty who is called. Roughing is the call against the bruising winger.
1:28 – Short-lived though, as Blichfeld catches Byfield away from the puck, and he’s whistled for interference. Byfield gets to his feet and heads to the bench, appears to be okay.
0:45 – LAK Goal – The Kings take a 2-1 lead with less than a minute to play in the second period. Vladimir Tkachev with a cross-ice feed to Clague, who fires home glove side. 4-on-4 goal for the Kings.
0:17 – LAK Goal – Austin Wagner makes it two goals in less than 30 seconds. The winger used his speed to create space for himself down the right wing, and beat Reimer to double the advantage late in the second period.
0:00 – How about that second period…..Kings score three and flip the script in San Jose.

First Period
20:00 – We are underway in San Jose!
18:00 – Veteran-laden lineup tonight for the Sharks. Burns, Karlsson, Vlasic, Couture, Hertl, Meier all dressed for the hosts. A terrific test for a younger Kings lineup.
17:03 – First power-play of the evening falls to San Jose. Kale Clague is whistled for hooking early, as the string of early penalties in Pacific Division preseason games carries over into tonight’s game.
14:58 – Active opening five minutes and change for Jonathan Quick, who makes the game’s first five saves, with a couple of other covers in his own end. First action for the veteran this preseason, coming off of offseason shoulder surgery.
9:31 – Quick continues to be busy, but has kept the Sharks at bay here through the opening half of the opening period. San Jose with nine of the game’s first 11 chances, with Quick turning aside an early flurry, including a chance from William Eklund in tight.
6:21 – SJ Goal – Timo Meier redirects home a Ryan Merkley shot from the point and it’s the Sharks that strike first midway through the opening period. 1-0.
3:37 – Alex Iafallo with a shot on goal from a tight angle, near the goal line, the first for the visitors in a few minutes. Kings haven’t had a ton of opportunities thus far, especially from in tight.
2:05 – Kings head to their second penalty kill of the evening, as Jacob Doty sits for boarding. Barring a goal, or a Sharks penalty, we’ll see most of the rest of the opening period with a San Jose man advantage.
0:02 – Brent Burns hauls down Gabriel Vilardi in the neutral zone less than two seconds before the intermission. Kings will have 1:58 of man advantage time to begin the second, down by a goal.
0:00 – Sharks with a heavy SOG advantage in the opening frame. See if the Kings can get something started with the PP to start the second.

Game 2 of this week’s preseason schedule, with a completely different group of 20 skaters expected tonight in San Jose. Todd McLellan said that he planned to get a look at a bunch of players over these first two games, and he certainly will do so with tonight’s lineup. After the game, McLellan will have seen 40 total players in action, with most of the notable exceptions being veterans who will see their preseason workload managed, especially early on.