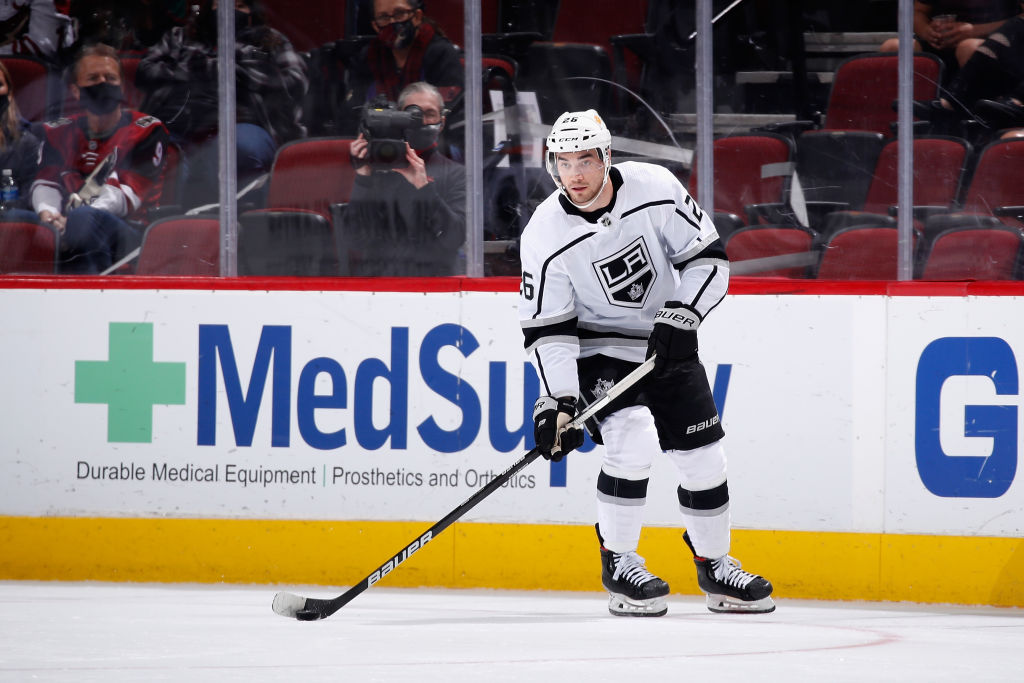 Third Period
20:00 – Third period is a go! Villalta in net for the Kings, Thornton in net for the Coyotes.
19:27 – Early man advantage here for the Kings, with Maccelli sitting for Arizona. Fourth chance of the evening here for LAK.
17:27 – Kings now 0-of-4 on the PP, with one shot on the man advantage here early in the third period.
15:05 – Great shift by the Tynan line. Lots off offensive zone time, couple of looks, but not able to break the tie as we pass five minutes gone by here in the second period.
11:39 – ARI Goal – After the Kings had the first seven shots on goal of the third period, Arizona scores on the rebound of their first one. The 18-year-old Dylan Guenther buries a rebound past Villalta and it’s 2-1 Coyotes.
9:54 – Kings will head to their fifth penalty kill of the evening. Sean Durzi is called for holding just shy of the midway mark of the third period.
9:01 – Fancy-looking shot attempt from Barrett Hayton on the man advantage but his effort is deflected over Villalta’s net and out of play. One SOG so far on the man advantage.
4:30 – Brendan Lemieux gets a redirection on a Tynan effort, before Tynan just misses the net himself. That line has put pressure on Arizona in the third period with the Kings now in search of a tying goal.
1:32 – Kings net is empty, 6-on-5 situation here late in regulation.
0:00 – The Kings fall 2-1 in Arizona. We’ll now participate in a “practice shootout”, to give the players additional repetitions in the skills competition. A pre-planned event, regardless of the final score.

Second Period
20:00 – Back at it for the second. Kings will open the second period on the PK, after the carryover of Grundstrom’s high-sticking infraction.
15:31 – Similar to the first period, it’s been Arizona that has come out firing to open the second period, with four of the first five shots on goal. Petersen has stopped the first 10 he’s seen thus far.
13:39 – Petersen denies Jenik from the right-hand circle and freezes for a whistle. Lot of possession by Arizona here, but we still await the first goal.
11:37 – LAK Goal. Defenseman Cade McNelly gets a shot off from the point, that is turned aside by Korenar, but Walker crashed the net and puts it home. Funny enough, Walker scored the last goal of last season, and now has the first of the preseason here.
7:50 – We’ve got a scrap! It’s the young Cade McNelly and the veteran Andrew Ladd, and if you had that one your Bingo card then you win the Insider of the Month award for September.
7:49 – McNelly gets the extra minor on the play and the Coyotes will get a PP.
5:20 – ARI Goal – Loui Eriksson ties the game at one, as the veteran forward snaps a quick shot past Cal Petersen from the left-hand circle. All square here late in the second.
5:10 – Entering the game in goal is Matthew Villalta. Todd McLellan indicated the plan was to split the goaltenders tonight, and there you have it.
3:50 – Can’t believe I forgot to send this earlier! Adrian Kempe, Trevor Moore, Sean Walker wearing the A’s tonight for the Kings. Looking at the group in action tonight, makes sense to me.
0:00 – Both teams get on the board and we’re all tied up through 40 minutes.

First Period
20:00 – Puck is dropped and we are underway in preseason action!
19:08 – Kings to an early penalty kill, as Sean Walker is whistled for interference inside the first 60 seconds of the preseason.
17:08 – 1-for-1 on the penalty kill for the Kings. Best ratio in the league during the preseason so far, you love to see it. Hayton had a good look for LAK, but Petersen was equal.
15:19 – LA’s turn to head over to the man advantage. Ryan Dzingel for cross-checking, and we’ll get our first Kings PP of the evening.
13:19 – Both teams have traded power plays, an neither team converts. Mikey Anderson had an opportunity off of a Trevor Moore feed, but Korenar is equal for Arizona.
9:01 – Another power-play opportunity upcoming for the Kings, as O’Brien sits for roughing. First PP unit is quarterbacked tonight by Sean Walker, a regular on the second unit last season.
6:22 – Kings not quite as effective with gaining the offensive zone on their second effort, as they were on the first. Not quite able to get things settled, and now head to a PK of their own for too many men on the ice.
4:47 – Penalty fest here in the first. Moser for interference. Getting some special teams work in tonight, that is for sure.
3:05 – Good looks for the young guns here late in the first. First it’s Arthur Kaliyev, then it’s Martin Chromiak, but neither are able to beat Korenar, as we approach the intermission.
0:54 – Hey! Another penalty! Make that three apiece in the opening period. This one to Carl Grundstrom for high-sticking.
0:00 – Kings 0, Coyotes 0, Penalty Box Attendants Active

The comments, tweets and rocks thrown through my window have confirmed that you already know this, but we are audio-only tonight from Arizona, as the Kings take on the Coyotes to open the preseason. Nick Nickson’s call from the desert is embedded above. I’ll keep this thread updated as best I can to get us through these first two games, and we’ll be on TV from Thursday’s game in Utah, on through the remainder of the season. With no TV feed, the Kings look as good as you want them to. More to follow!