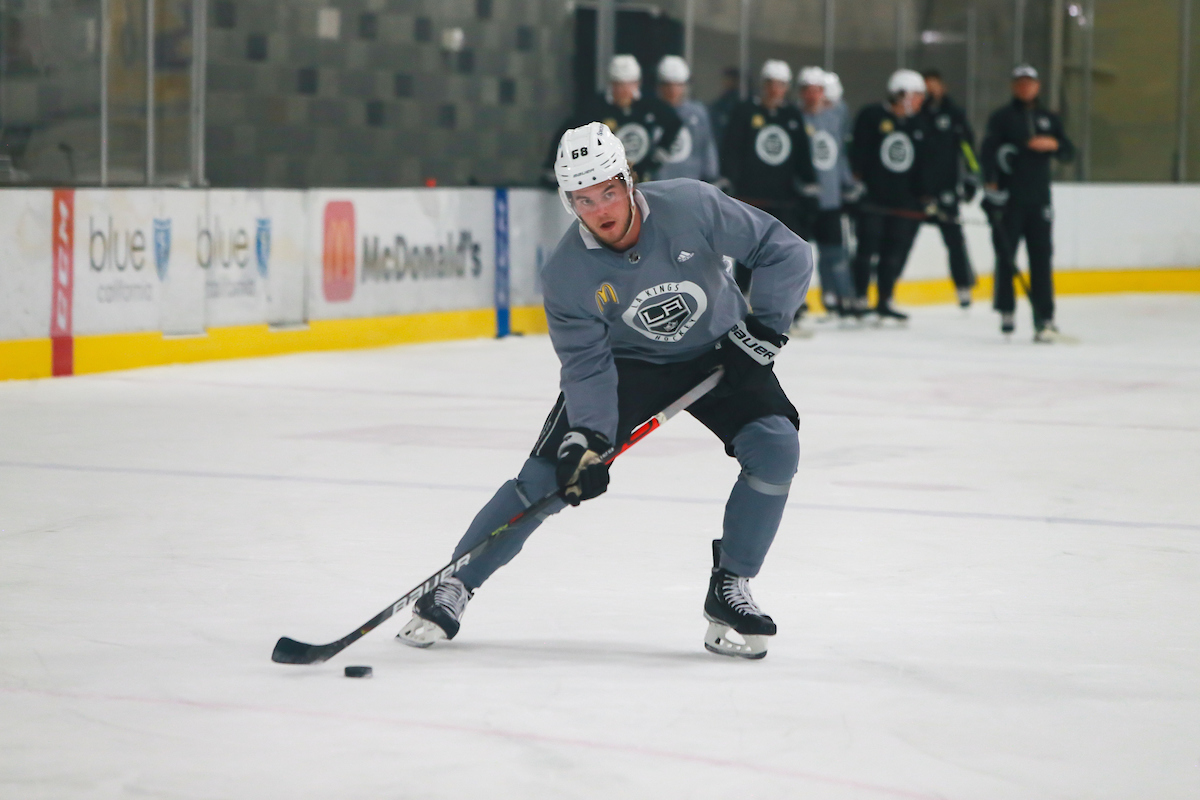 For certain players who come across the pond from European ice to North American ice, playing more directly sometimes requires an adjustment period.

The European rinks are wider, allowing players more space on the ice, more opportunities to make a puck possession play, and less of a need to make a direct play, due to those additional options.

With one year of North American hockey now under his belt, forward Samuel Fagemo seems to have made the transition, and he’s looked like he’s done so with ease.

“Here in North America we have to play [like that], the pace is much higher here,” Fagemo said. “I focus on getting North, getting the puck and shooting it as soon as possible. I think [it’s been a big focus].”

Fagemo was one of the standouts of the 2021 Rookie Faceoff in Arizona, totaling 12 shots on goal across the two games he played in Arizona. The “veteran” of one AHL season had a goal and an assist in Game 1 against Colorado, followed by another goal in Game 3 versus Vegas.

The Swedish forward began the tournament on a line with Alex Turcotte at center and Tyler Madden on the left. The trio combined to throw 17 shots on goal against Colorado on Friday evening, controlling the play and nearly outshooting the Avalanche on their own.

Though that unit consisted of three players with experience in Ontario from the season prior, putting three more experienced rookies on the ice together, they hadn’t played together as a unit until that tournament. Turcotte attributed Fagemo’s direct style, and ease to play with, as a big reason they instantly clicked.

“He’s a great player – We all know about his shot, he’s got a cannon, but he puts himself in the right places, he knows where to be,” Turcotte said. “He’s very predictable to play with, so it’s easy to read what he’s going to do. That’s why he works well with anyone, and that’s why I think it was so easy for us to fall back into place and play our game today.”

Late in the first period, Fagemo doubled the Kings advantage, with his first goal of the tournament coming less than two seconds from the buzzer to end the opening frame. Fagemo’s goal was a direct reward of his offensive awareness, positioning himself well to bang in a rebound at the back post, after an extended offensive sequence.

“It’s almost like a goal and a half, because your locker room has buzz,” Wroblewski said. “The players are excited and especially when it’s a goal-scorer like Sammy [Fagemo], that just fuels the other guys too.”

Fagemo added an assist in the third period, the secondary helper on Madden’s third-period goal, an insurance tally in the 4-0 victory. Fagemo was one of four players with multiple points in the tournament-opening victory, part of a strong game from the forwards as a whole.

Game 2 was an off day for Fagemo, along with fellow forward Rasmus Kupari, considering the quick turnaround between the games on Sunday evening and Monday morning.

While acknowledging that the day off was a benefit, Wroblewski said that Fagemo took his situation and ran with it, instead of waiting on anything to come to him. Certainly a pro for the dynamic winger.

“It was a statement game for him, I think,” Wroblewski said. “He was a benefactor of having a day off yesterday, for sure, other guys played a 3-in-4, but he didn’t wait around. He had a ton of ice and he was flying.”

On Monday morning, Fagemo displayed a direct style of attacking play that lent itself to chances throughout the game. In a contest during which Head Coach John Wroblewski felt his team, for the most part, did a too much circling, and regrouping, and didn’t make enough direct plays, Fagemo was one of the exceptions. The speedy forward created a high-quantity of opportunities and was one of the standouts for the Kings throughout the course of the showcase event.

“I think he played a direct style, he wanted to use his speed first, especially today, that was the game,” Wroblewski said. “It was not an East – West game, it was hard-nosed and Sammy brought that for us. He was one of our leaders today for sure.”

While he got the one goal, it could have been an even higher scoring time for Fagemo, who finished the tournament with two goals and three points from the pair of games played. Fagemo created a slew of offensive opportunities, with one play specifically, from the second period coming to mind. The 21-year-old winger drove down the left-hand wall, used his speed to get around one defender, shielded the puck towards the middle and just ran out of room as he went to tuck the puck around the goaltender’s far pad.

“Whether it was driving the net or winning a loose puck battle, the puck was also finding him a lot,” Wroblewski added. “He was down and around the net front, he had a couple of whacks at pucks, easily could have had more on the scoresheet. Great week for him. Two games, and he set himself nicely for main camp.”

Ultimately, that’s the goal of these showcase tournaments.

Fagemo is a player who generated some momentum for himself at the Rookie Faceoff, which he will look to carry into main camp starting tomorrow.

Over the summer, he noted twice that his focus was on adding strength and speed, with building muscle and getting stronger being a massive focus of his between his first and second seasons with the organization.

Amongst a crowded group of Kings forwards, Fagemo is an interesting name, as a player fighting with several others for a potential Opening Night roster spot.

Editors Note – Sorry for the average video quality, working with what we got here!