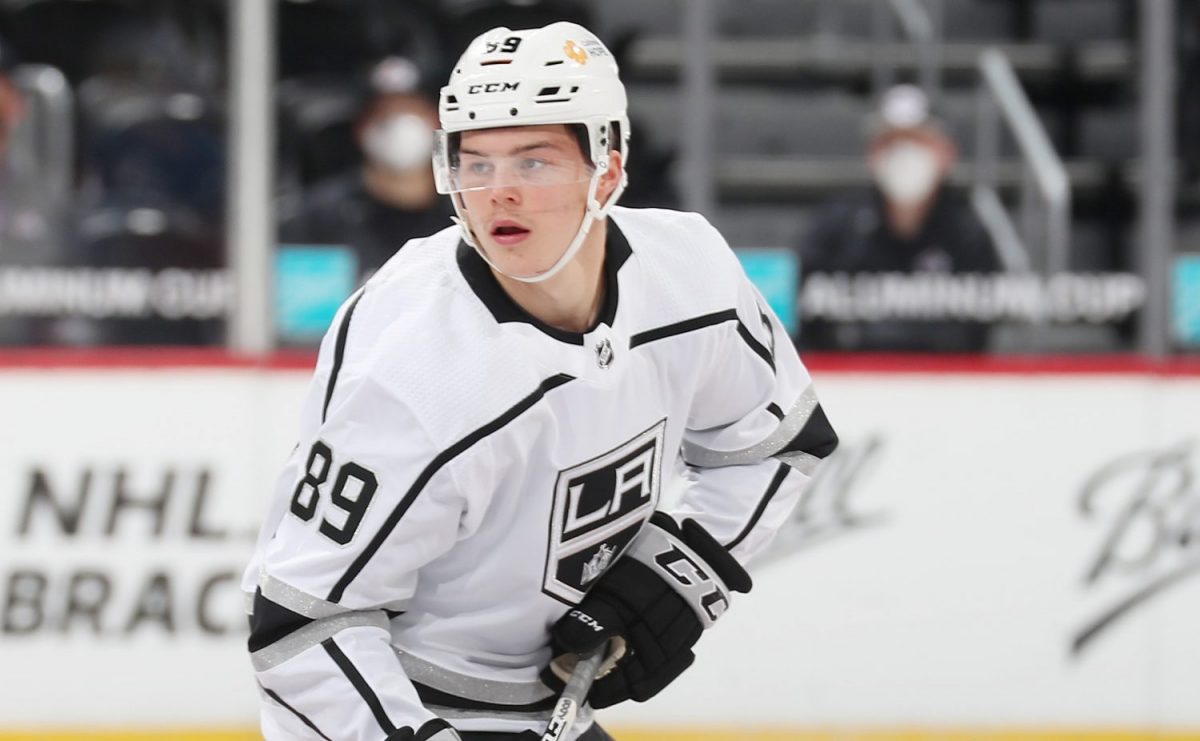 The LA Kings concluded the 2021 Rookie Faceoff in Arizona with a 3-2 defeat against the Vegas Golden Knights on Monday afternoon at the Ice Den.

Samuel Fagemo and Martin Chromiak were the goalscorers for the Kings, who were unable to complete the perfect weekend, but still came away with a pair of victories from three games played in total.

After a scoreless opening frame, Vegas scored a pair of goals, 35 seconds apart, midway through the middle stanza to take a 2-0 advantage. Jonas Rondbjerg and Jack Dugan were the goalscorers for Vegas.

The Kings pulled one back 17 seconds into the third period, as Fagemo snapped a shot over the pad of the goaltender to get LA on the board. After another Vegas goal, off the stick of Kaleb Pearson, Chromiak again brought the visitors back to within one, as he re-directed a Jordan Spence shot from the right point to make it a 3-2 game.

LA had their share of opportunities in the final 9:11, after Chromiak’s marker, but couldn’t complete the comeback in the matinee.

Fagemo led all Kings skaters with nine shots on goal, while defenseman Markus Phillips had five from the point. The Kings had 47 shots in total, while goaltender Lukas Parik was solid, with 25 saves on 28 shots.

3 Takeaways
1. John Wroblewski felt that the Kings as a whole did a little bit too much circling back, playing East-West hockey, but one player we both agreed did not do that was Samuel Fagemo. Fagemo had a game-high nine shots on goal and was around the puck all game long. Fagemo played a direct, North-South game, and used his skating abilities and puck handling skills to create offensive opportunities for himself and his teammates. A strong effort to close out the showcase and the best player on the ice today for my money.

2. Today’s game against Vegas had a very different feel than the other two. It was faster and heavier than either the games against Colorado or Arizona were. The hits felt harder, the neutral zone felt faster, and there was even a fight, featuring camp invite Cade McNelly.

3. While obviously you don’t want to see a player leave the game early, Wroblewski used the word “precautionary” after the game with regards to Quinton Byfield’s status, while reaffirming the notion that he is day-to-day with an upper-body injury. With main camp just a few days away, precautionary at this point seems to be the best approach. Will look for an update later in the week.

Samuel Fagemo
On if he’d call today’s game the most physical of the weekend
Yeah, I think so. Higher pace and the most hits and physical play, we had a fight here today too. I thought it was physical today.

On his focus on playing North-South hockey
Especially here, in North America, we have to play [like that], the pace is much higher here. I focus on getting North, getting the puck and shooting it as soon as possible. I think [it’s been a big focus].

On his improvements and adjustments to that more direct style of play in North America
Yeah, for sure. Especially in these two games here, and last season too, I’ve taken some steps. It feels awesome, and I’m feeling more confident with it.

Rasmus Kupari
On assuming a larger role, commanding more of the puck today
Yeah, I felt more comfortable today than in the first game. I had more of the puck, created some more chances, our line. It felt pretty good.

On wearing the “C” today
Of course it’s a big honor. I don’t think I’ve been the captain before, maybe in juniors many years ago, so it was a big honor.

On how this tournament helps to prepare him for main camp coming up this week
I think it’s huge for all of us to get a few games before the main camp. We’ll see how it [compares to] the other guys, but it was definitely huge for us to get some games, and keep rolling.

On using his NHL experience in camp this season, and what he feels his biggest areas for improvement are
Just to play my game. Those first games I got last year, I think I did well, but play more with the puck, show my skills and try to be more direct. Play to my strengths. Last year was huge, after my long injury, and I already feel more comfortable now to get that spot in training camp.

John Wroblewski
On Jordan Spence getting adjusted to this style of hockey throughout the week
I’ll be interested to see how he acclimates to training camp. He’s undersized at this point, but he’ll be thrown into the deep end with how to defend Kopitar, or even a guy like Austin Wagner, with the size and speed factor, it’s going to be another whole level. He’ll also have the comfort level of guys who play more of a game of chess out there, who know how the pro game works, the simplicity of it. Once you play simple, and you get the momentum on your side, you can start to shift things into the complexities and let your skill come out. It will be a very, hopefully, profound learning experience for him and he can grab control of it and grab the attention.

On Samuel Fagemo’s play tonight and over the course of the two games
All of the credit in the world to Sammy. He came out with the proper attitude to play this game, be a leader for us, he was all over the puck. It was a statement game for him, I think. He was a benefactor of having a day off yesterday, for sure, other guys played a 3-in-4, but he didn’t wait around. He had a ton of ice and he was flying. Whether it was driving the net or winning a loose puck battle, the puck was also finding him a lot. He was down and around the net front, he had a couple of whacks at pucks, easily could have had more on the scoresheet. Great week for him. Two games, and he set himself nicely for main camp.

On Aidan Dudas, and the versatility he brings to the team
That’s going to be his calling card, his versatility, and not changing his identity because he gets a crack on the power play, or gets the opportunity to play up a line with Byfield having to exit. That’s one of the storylines for him, is survival, and then when he gets his chance, it’s going to be how he grab ahold of it. Three games in a row, he was one of the more impressive players on the ice for either team. A lot of credit to Aidan. I can’t even imagine how difficult it was to re-rack after two difficult games, a ton of penalty kill last night and then having an 11 AM game and logging 20+ minutes of ice time too. He was outstanding and I cant wait to see what he can bring to Ontario, and maybe even LA too.

The Kings rookies will travel back to Los Angeles this afternoon. The rookie will not skate tomorrow, and the first day of full training camp begins on Thursday, September 23 at Toyota Sports Performance Center.