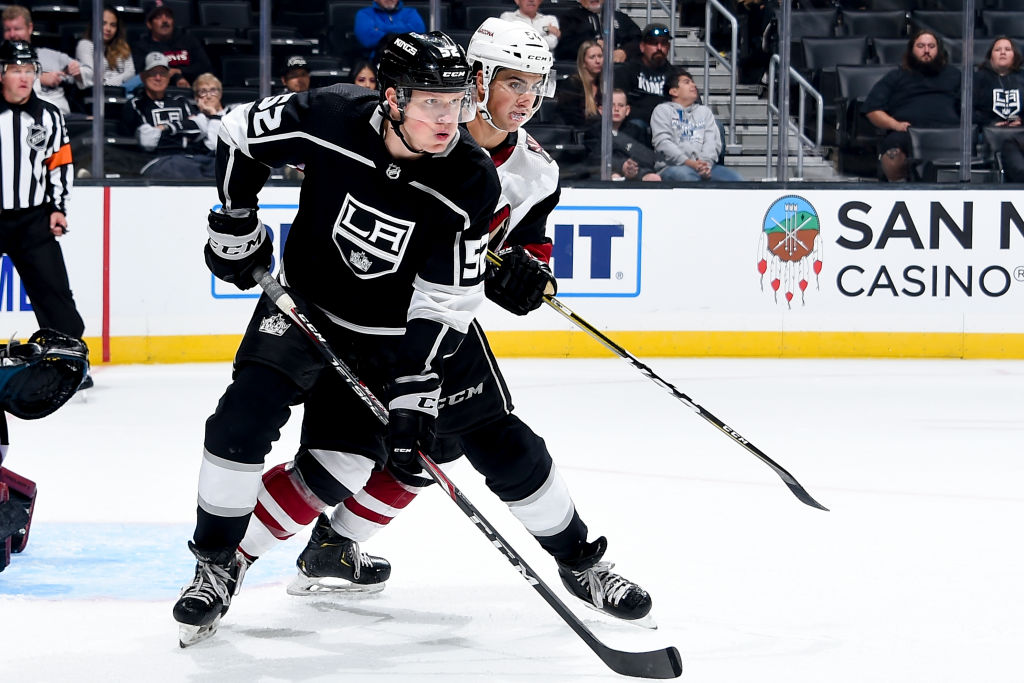 *Note – Live stream expected at 6:30 PM – Stream is Los Angeles and Arizona television markets only, will be blacked out in other markets

Tyler Madden scored the game-winning goal in the shootout, while Arizona failed to score on any of their three attempts.

Overtimed
5:00 – We’ll play overtime. Kings will start with an abridged 4-on-3 power play that carried over from regulation.
2:28 – Dudas is called for hooking midway through the extra session, and now the Kings will have a penalty to kill.
0:00 – Kings get the kill late in OT, and we’ll play a shootout.

Third Period
20:00 – Final period of action here in Glendale, Kings with a one-goal deficit to turn around here in the third.
16:15 – Kings looking livelier, and certainly a bit crisper, early here in the third. Couple of lines, back to back, putting something together.
13:02 – LAK Goal – Alex Turcotte fires off the goaltender, off the Arizona defenseman and in. Ping-Pong, 1-1.
7:56 – Quinton Byfield dodges what should have been interference in the neutral zone to create a 2-on-1, feeds Madden across the ice but the bid doesn’t go. Still 1-1, as we move through the third.
3:23 – Puck almost falls perfectly for Johan Sodergran in front, off a weird bounce in the offensive end, but he can’t corral it. On we go, 1-1.
2:46 – Hard collision into the boards, as Pavlychev gets tangled up with an Arizona player heading into the corner, giving the Coyotes a late power play.
0:00 – Off to overtime, tied at 1.

Second Period
20:00 – Back at it for the second.
19:21 – Ingham is tested early, on an in-tight 2-on-0 situation, after a defensive-zone turnover, and he responded with a left-pad stop Maccelli from the low slot.
15:45 – Arizona with a few chances here in the early minutes of the second period. Bit more pace here, Coyotes looking a bit sharper in the second.
14:04 – Some action! Helge Grans takes a stick up high, and the Kings will get the first power play of the evening.
11:20 – Kings had about 90 seconds straight in the offensive zone on the PP, several puck retrievals, but can’t convert. Pinelli was very active, but he also missed the best chance of the sequence, as he put a backhanded shot wide on an open net.
8:01 – Kaliyev takes the first LAK penalty of the evening midway through the second period. Arizona gets a chance up a man.
3:55 – ARI Goal – Dylan Guenther fires through some bodies in front from the right-hand circle. Which is annoying, because they play a howling sound effect when Arizona scores here.
0:00 – Arizona leads through 40 minutes, with the only goal of the evening thus far.

First Period
20:00 – Game 2 has begun!
14:36 – Love Alex Turcotte’s tenacity down low. Used his body effectively to separate man from puck, and led to a chance in front for Chromiak. Second play he’s created from below the goal line tonight.
10:29 – Good chance off the rush, Byfield carries through three zones and drops for Pinelli in the high slot. Shot is smothered by Vejmelka in net for AZ.
5:36 – Bit sloppier tonight, from both teams, here in the first period. Kings have frequently had the right idea, just a bit off on the execution thus far.
0:00 – 0’s all around through 20 minutes.