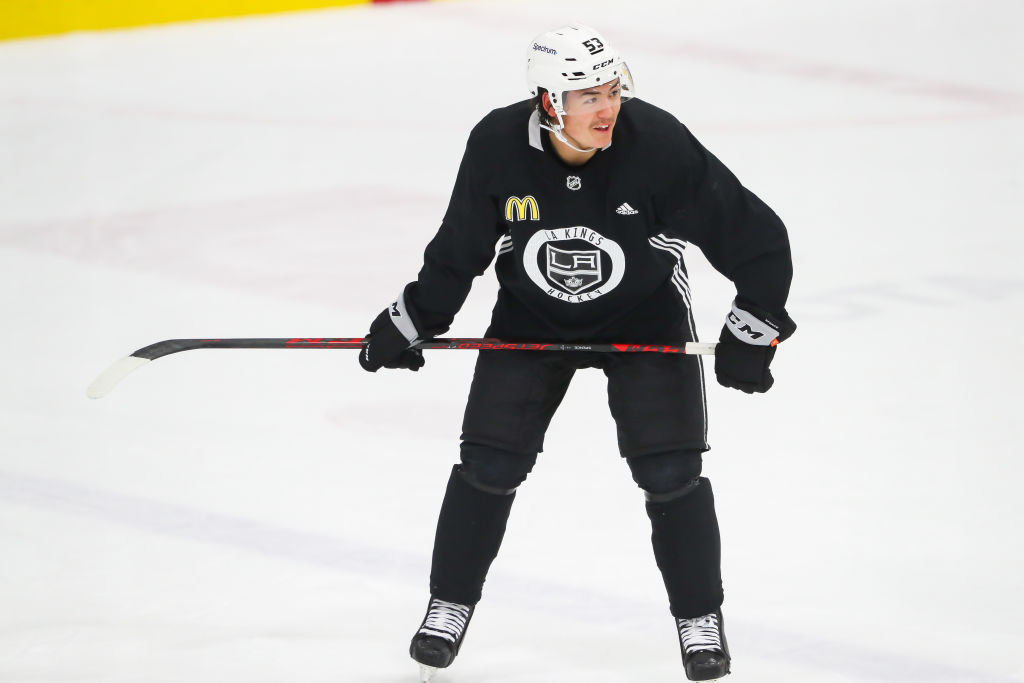 The closest thing we’ve got to a traditional, in-season gameday. The Kings rookies held a brief morning skate today at the Ice Den in Scottsdale, in advance of tonight’s 6:30 PM faceoff in Glendale against the Arizona Coyotes rookies.

The two sides will play at Gila River Arena, current home of the NHL club, in front of what should be a few more fans than we saw on Thursday. This morning’s skate gave us a few clues as to tonight’s lineup, which we should expect to see several changes from the group that played two days prior against Colorado. With another game to follow 16 hours after tonight’s begins, using the full collection of players available seems more likely than not.

The first goaltender off this morning was Jacob Ingham, indicating a change between the pipes after Matthew Villalta stopped all 23 shots he faced in the Game 1 victory over Colorado.

In terms of skaters, the name of the game will likely center around rotation, rotation, rotation. Samuel Fagemo, Rasmus Kupari and Markus Phillips were among those on the ice late, indicating that they won’t play tonight against Arizona. Logic would have it that they would likely feature again tomorrow morning against Vegas, with some of the camp invitees earning an opportunity to play.

Hear from Johan Sodergran and Jordan Spence below, with their thoughts from across the weekend to date, and notes on both individually on what they’re hoping to accomplish throughout the remainder of the showcase event.

Jordan Spence
On if he approaches this camp any differently, knowing he’s likely headed to pro hockey this season
No, I don’t think so. Coming into rookie camp, everyone is trying out for the team and everyone is just trying to prove themselves, get that spotlight, get that recognition. For me, I’m just trying to do the best I can on the ice, to showcase my skill. For me personally, I haven’t made the team yet, I’m here still to try out, and that’s my goal for this rookie tournament.

On his style of play, and what he offers the team in this tournament
I call myself an offensive defenseman, I like to move the puck up the ice and join the play when I can. I also think I’m responsible in the defensive zone, so for me, I just like to put pucks up to the forwards as quickly as I can, and generate offense when it’s there.

On the adjustments he’s made, moving from juniors to professional hockey
I think it’s just the speed, there’s a lot of good prospects, especially within our organization. I’ve had to adjust to that level and right now, we had a good game [against Colorado] and we’re really looking forward to this game tonight.

On things he might be looking to focus on from the Colorado game to tonight
I think last game, I was a little nervous at the start, it’s been a while since I’ve played in a real game. Tonight, I think I’m going to be more comfortable on the ice and just do my thing.