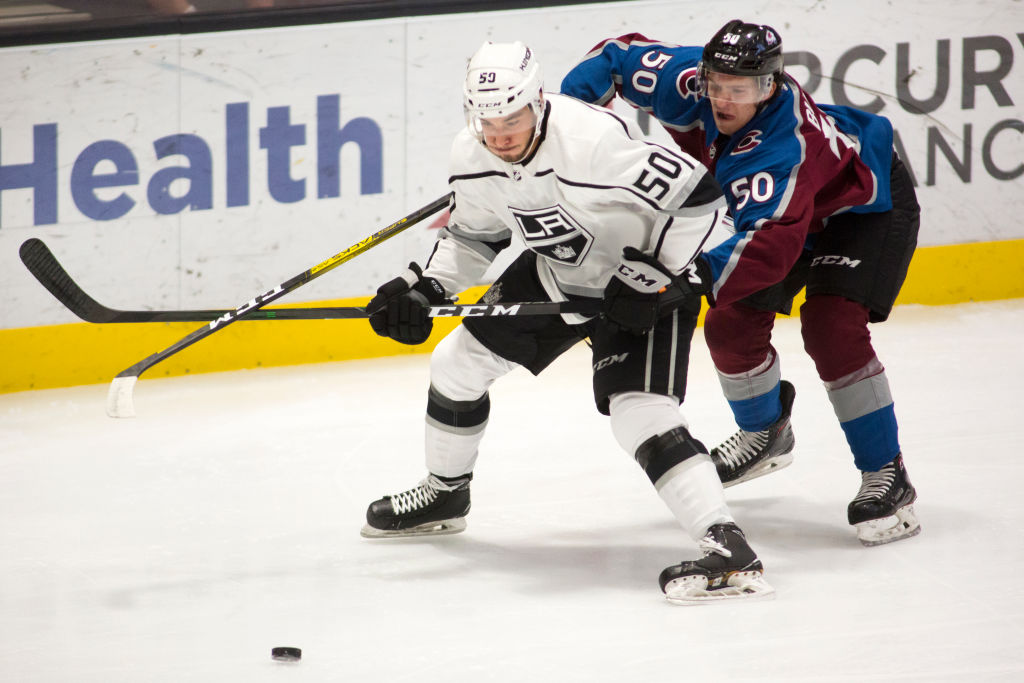 *Note – Live stream expected at 3 PM – Stream is Los Angeles and Colorado television markets only, will be blacked out in other markets

Third Period
20:00 – Back at it for the third, Kings lead by three.
19:05 – The two points (G,A) are nice, but Martin Chromiak continues to disrupt in both ends. Forced a turnover in the offensive zone early in the third, led to an opportunity for LAK.
15:45 – Samuel Fagemo is a very heady player. Strong hockey sense. Seems to be in the right place more often than not, makes smart plays.
12:06 – Kings to their fourth PK of the afternoon. If you’re looking for anything to complain about, it could be penalties. But, then again, if we’re complaining during rookie tournament we are doing something wrong.
10:45 – Double-minor for high sticking against Sean Durzi. PK’ers to work!
6:30 – In the span of four minutes, we saw 5-on-4, 5-on-3, 4-on-4 and 4-on-3 situations, with both teams trading man advantages in there. The result from it all was no goals either way, and we’re back to even strength as we approach six minutes remaining.
5:56 – LAK Goal, Madden. The Northeastern product drives the net from the right side and buried what appeared to be Fagemo’s rebound. 4-0 Kings, 5:56 left.
0:00 FINAL – Kings come away with a win to open the 2021 Rookie Faceoff. Good showing by several, reactions and quotes to follow here on LAKI.

Second Period
20:00 – Second period is underway, with the Kings rookies leading by a pair. 15 seconds of 4-on-4 to open the middle stanza.
17:30 – Helge Grans displaying a hard, low show from the point. Got a pair through from the right side, both not flashy, but effective plays.
13:58 – As you’d expect, Madden/Turcotte/Fagemo trio creating opportunities in the offensive zone on every shift. Three guys you’d have as top-end players in this type of tournament, and all three delivering halfway through Game 1.
13:20 – Aidan Dudas has some serious wheels. With LAK shorthanded, he was two steps behind his defenseman, wound up two steps ahead for a breakaway. Backhanded deke is denied by Annunen, but an impressive effort.
9:45 – See 13:58. Every shift.
7:27 – LAK Goal, Byfield. Chromiak works a turnover in the left-hand corner, Annunen was out of the net and he hits Byfield for the tap-in. 3-0 Kings, two points each for both players.
5:23 – Dudas takes a hooking penalty, but actually not a bad one to take. Would’ve been a 2-on-1 the other way had he not made the play.
1:03 – No shortage of odd-man opportunities for LAK here towards the end of the second. Kaliyev with a good look at it off the rush but his shot was deflected.

First Period
20:00 – Underway in Arizona!
18:51 – LAK Goal, Chromiak.Tic-Tac-Toe play, Byfield to Kaliyev to Chromiak off the rush. Great quick hands by QB/AK, Chromiak drives the net heads up to bury.
17:11 – Durzi gets a puck towards the net, Alex Turcotte positions himself in front but his re-direct is smothered by Annunen. Nice look.
14:45 – Byram leads an end-to-end rush, gets in along on Villalta, but can’t tuck in the puck as he deked to the forehand. Colorado with their first real o-zone time of the game.
12:55 – Good work from Madden/Fagemo, with the latter drawing the game’s first penalty. 4 forwards on the top PP unit.
6:59 – Cade McNelly, a very physical player. Big hit earlier in his own end, but is called for cross checking after one in the neutral zone. Kings to their first PK.
4:45 – Good kill from LAK. Early shot from distance by Olausson for Colorado, but after that, lots of plays broken up and pucks cleared.
1:45 – 4-on-4! Penalties on McNelly, his second of the period, but Savoie also takes a tripping minor. Open ice, with Byfield and Kaliyev starting for LAK.
0:02 – LAK Goal, Fagemo. Sean Durzi fires one from the left point, and his shot is saved, but Fagemo cleans up the rebound to make it 2-0 Kings with 1.5 seconds left in the first.
0:00 – Kings take a two-goal lead into the intermission.