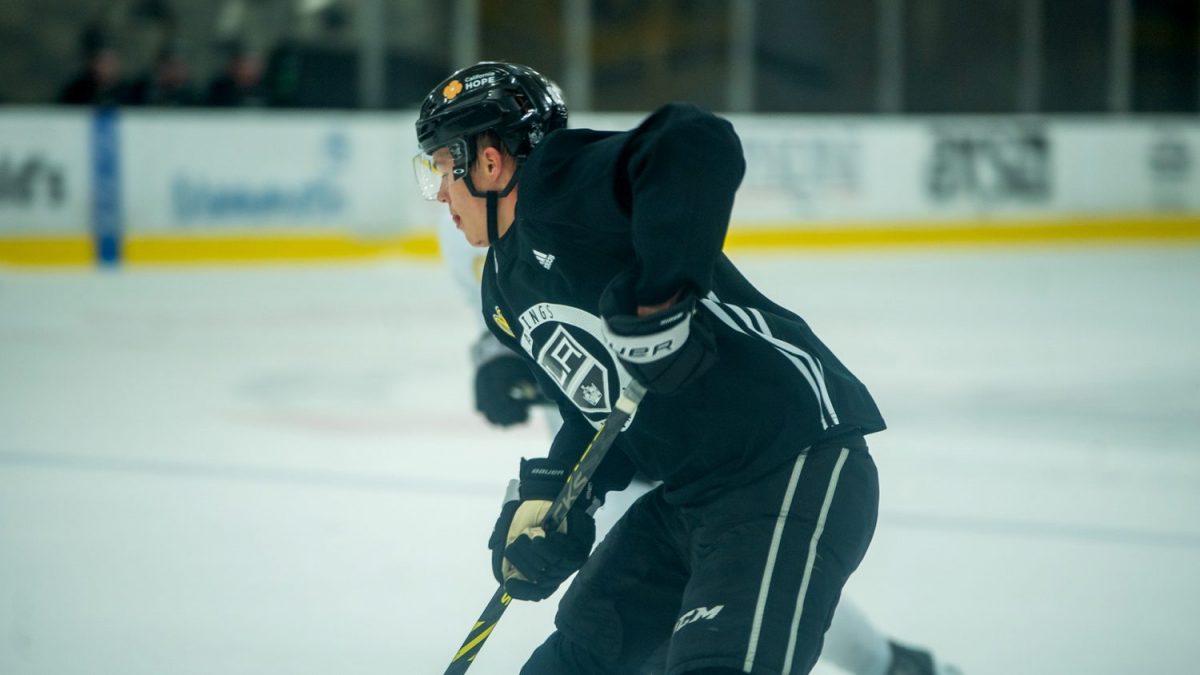 The LA Kings rookies were on the ice this morning at Toyota Sports Performance Center for the first time as a group, before they depart for Arizona later today to compete in the 2021 Rookie Faceoff this weekend.

This morning’s skate gave us some indications of what we might see this weekend in Arizona, though typically, these tournaments spread the wealth in terms of personnel and roles, allowing for players throughout the roster to showcase what they can do in a game setting. The Kings will play the Colorado Avalanche tomorrow afternoon at 3 PM, followed by games against Arizona and Vegas on Sunday and Monday respectively.

There weren’t line rushes performed per say, and with a group of 16 forwards, the players were broken up a number of different ways throughout practice. During line-rush segments, however, the following three combinations appeared a few times, all consisting of players who skated in Ontario last season, in addition to recent draft pick Francesco Pinelli.

The defensemen shuffled pairings throughout the skate, with Head Coach John Wroblewski noting in his post-practice availability that the backend has less experience than up front, meaning that lesser-expereinced players might see larger roles during the tournament. Only Sean Durzi and Markus Phillips have played AHL games of the defensemen listed on the roster.

Speaking with Wroblewski this earlier today, the plan for the weekend is “ever-evolving”. The Kings roster lists 25 skaters for 18 roster spots on a given day, and three goaltenders vying for one net. Considering the setting – a preseason rookie tournament – past years have suggested that we’ll see some sort of rotation over the course of the three games.

“It’s ever-evolving with the rookie tournament, with what your expectations are,” Wroblewski said. “Some years, you go into it, probably thinking our team might be a little deficient in one category, or exceptional in one category, and you really want to see those results, and some years you really just want to see improvement from players. With the state of the organization and the state of the young core of this group, were just looking to see the positive things that they can bring.”

That’s not to say we’ll see perfectly even distribution in terms of games, ice time and role between all players, but at the end of the day, the goal here is to evaluate. The Kings will give their staff the opportunity to do that across the board.

Bye-Bye-Byfield
Naturally, a player of interest this week is forward Quinton Byfield, ranked recently by The Athletic as the NHL’s top prospect.

Now, back on the ice, Byfield is ready to roll this weekend in Arizona.

“I did some rehab with the Kings, they take good care of us here, and I’m 100 percent and ready to go,” he said today.

Byfield focused on his six NHL games over the summer throughout his summer training. "Faster and stronger" is how he described his time in the NHL, and his summer focuses were on adding speed and strength, as well as in the faceoff dot.

As one of three players on the Kings roster that has played NHL games, it’s hard to imagine Byfield, just 19 years old, as one of the more experienced players on the roster, but with a full season of professional hockey under his belt, he certainly fits the bill.

In typical hockey guy fashion, Byfield has no greater expectations than just playing his game this weekend and making an impact for the team. He centered a top line for the Kings during this morning’s skate, an indication that he would do so tomorrow afternoon against the Avalanche.

“As a whole, they told us, the returning players, to take more of a leadership role,” Byfield said. “It’s weird for me to say ‘show the younger guys’ about pro hockey and being at this level. I’m excited for that challenge, to go out there and play hockey again, so I’m excited for everything here.”

Heading into the weekend, Byfield has been impressed with what the group as a whole has shown. He is familiar with a large number of the players heading to Arizona alongside him, and has a good first impression of those he hasn’t yet played with.

“I think we have a lot of returning players, a lot of guys who have played pro hockey and a lot of guys who are high picks, great players with great talent, and the camp invites have shown a lot of promise out there,” Byfield added. “I’m excited to get on the ice with them, we have a really good team to go out there and come back with a couple of wins, and I think that’s the main goal here.”

Reign Drops
The roster for this weekend, as it stands now, has 11 names of players who played last season for the Ontario Reign.

That’s a good chunk of the roster for an event like this, who not only know and understand each other, but also the terminology and systems that Wroblewski uses in practices and meetings.

“Having those 11 outstanding young men that we had in Ontario last year, it goes a long way and we’ll lean on them heavily,” Wroblewski said today.

Even just in practice during today’s skate, drills were more efficient having a large group who had been through similar experiences last season.

“Just the drills, it’s massive,” Wroblewski continued. “If you want to have a cohesive practice, you have to have that learning process, where guys show up and lead other players, who follow suit, and they push that leadership group. That’s something we challenged the entire group with yesterday, for leaders to lead and for guys who might be new to the organization to push and to make a lasting impression. It’s everything. It’s expectations off the ice, with how we treat support staff, people that are taking are of us. Everybody becomes a value and we want to make sure we appreciate them.”

Speaking with Byfield earlier today, who is included in that group, he echoed the benefits of having so many players who have already skated together for at least a portion of the season.

“[Your teammates] know you, and they can lean on you a little bit more, and vice versa, you can go up and talk to them, you’re more comfortable in that setting,” he said. “Even in the locker room, with all the guys, connecting and re-connecting, I think it’s just a comfortable environment coming into this year, knowing everyone from last year.”

Durzi is perhaps the most experienced player on the Kings roster here this weekend, with two full seasons at the AHL level under his belt. Durzi saw his offensive totals increase last season, while skating in 39 of Ontario’s 40 games played, missing just one when he was up with the big club.

Durzi touched on being one of the more experienced guys this weekend, and how he can help some of the younger players along, while also defining his own expectations, or lack there of, for the tournament and training camp as a whole.