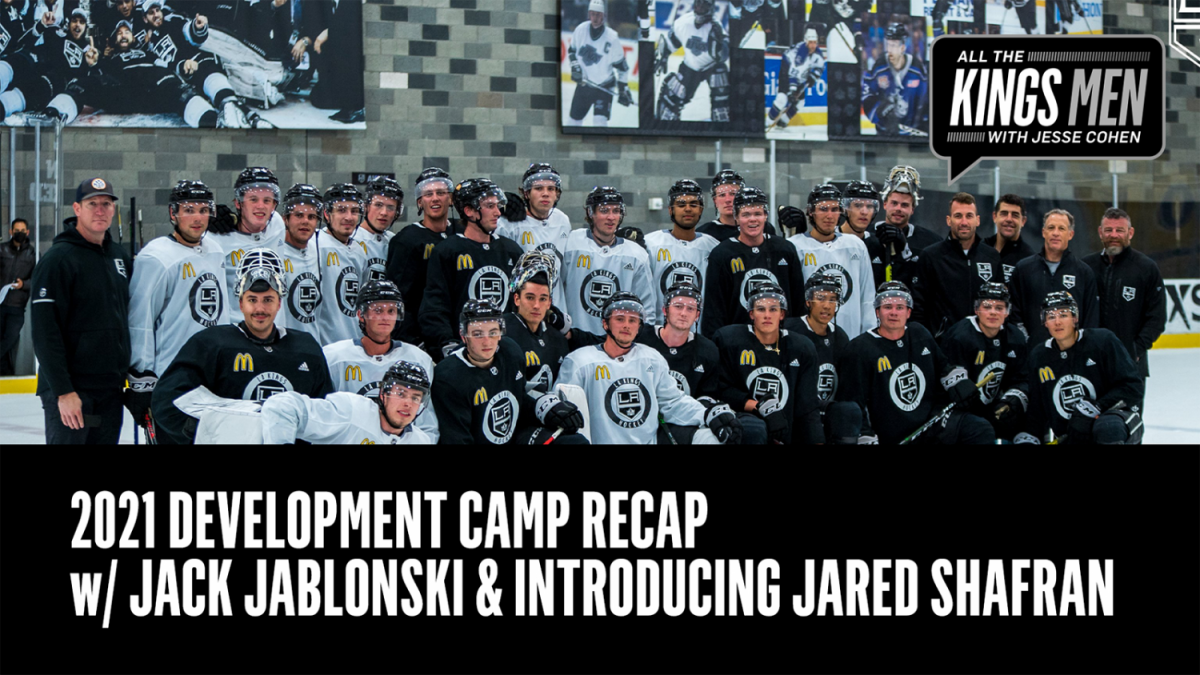 Jared Shafran and I joined host Jesse Cohen to break down the 2021 LA Kings Development Camp. The trio took a look at the returning players in the Kings system as well as the handful of new faces making their LA Kings Development Camp debut. Despite some high-profile absences and early departures, established prospects like Rasmus Kupari, Samuel Fagemo and Tyler Madden led the way while newcomers Brandt Clarke and Francesco Pinelli impressed everybody with their poise and talent.

Last week’s development camp showcase gave Kings fans a visual of 29 of the organization’s future top prospects, along with a strong selection of camp invitees. Of those 29 players, 15 were either Kings draft picks or acquired prospects via trade. Highlighted by four first-round selections, the camp did not disappoint and was filled with a high pace, skill and high-end talent every single day. The excitement surrounding the first Kings Development Camp since 2019 gave fans the opportunity to see both a portion of the past two draft classes in person for the first time and see the growth of the former draft picks as well.

With the departures of Quinton Byfield (undisclosed) during Monday’s morning session and Alex Turcotte (acute appendicitis) following Monday’s sessions, even more attention was then focused on some of the other participating prospects, including Brandt Clarke, Samuel Fagemo, Rasmus Kupari, Tyler Madden and Francesco Pinelli. All drafted in the top three rounds of their respective drafts, each player gave the organization and fans alike reason to be excited for their futures. All on different timelines, the Kings prospects who competed in development camp continued to prove the analysts that claim the Kings prospect pool is both ranked No. 1 in the NHL and the deepest in the league right. With standout performances from the five aforementioned players and impressive showings from mid-to-late round picks like Martin Chromiak, Aidan Dudas, Andre Lee, Johan Sodergran and Jordan Spence, the Kings have to be happy with the level of play all of last week.

Clarke, Fagemo, Kupari, Madden and Pinelli gave their take on development camp as a whole –

Kupari – Podcast Analysis @ 22:15
It was a really good camp. I got to know some new guys and work on some things that I needed to learn as a forward. Jarret Stoll and all of the Player Development staff did a great job and made it a fun week.

Fagemo – Podcast Analysis @ 25:15
The first time stepping on the ice in development camp was awesome and a lot of fun. It was great to meet a lot of the new guys as well. It was a blast out there I had a lot of fun……I was really focused on my defensive growth in camp and wanted to show that I’m getting stronger.

Madden – Podcast Analysis @ 28:15
Getting back to Los Angeles and getting to see my teammates from last year in development camp is great. I consider all of them my best friends. We all have a relationship together and it’s always nice to see them.

Clarke – Podcast Analysis @ 49:15
Camp has been great. I’ve been looking forward to Development Camp since the night I was drafted……during camp, I’m really focusing on playing my game, listening to the coaches and be a good person. I’m here to perform and impress this week. It’s been really fun and I want to show that I can play with the older guys.

Several players from the Kings development camp roster are also expected to compete in Rookie Camp and the Rookie Faceoff in Arizona, with the Kings schedule to begin on Saturday, September 17.