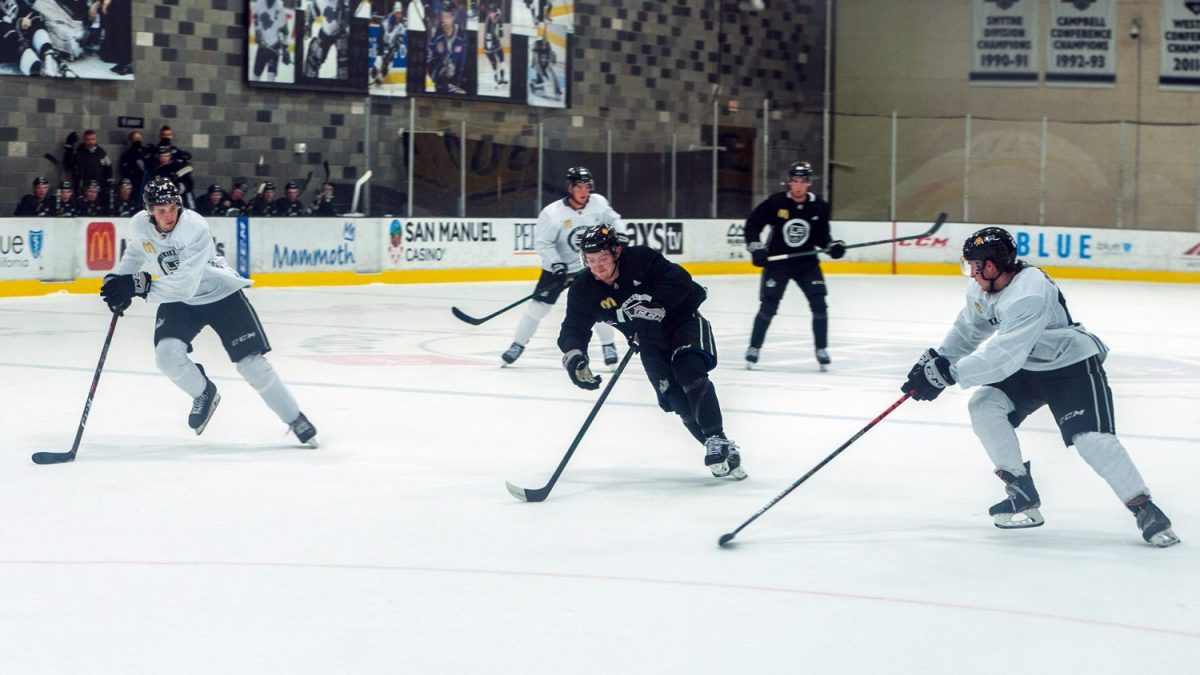 For the second straight day, the 45-minute morning sessions were split up between forwards and defense. With the defensemen on the ice first, to no one’s surprise, the focus of the skate centered around quick puck-moving and decision-making under pressure. The session included neutral zone regroups between defensive pairs and breaking out with a forechecker pressuring the puck-carrying D-man.

The forwards followed after a quick resurfacing and tempo was the theme of this skate. With lots of puck movement, the offensive-minded group spent their session getting their legs under them and getting pucks on net.

Unfortunately, the day started with a few missing bodies…
– Quinton Byfield missed today’s sessions after departing in Monday’s morning session and is considered day-to-day. The injury was not disclosed.
– Alex Turcotte was also absent on Tuesday and did not participate out of an abundance of caution.

The afternoon session was more of the same from the previous day. First, starting with 15 minutes of in-zone 1-on-1, 2-on-2 and 3-on-3 battles, followed by a controlled scrimmage. The scrimmage itself was also separated into three parts: 5-on-5, 4-on-4 and 3-on-3.

– Tyler Madden showed up in the afternoon session, flying around seemingly all scrimmage long and made multiple beautiful plays with the puck. Most notably, Madden weaved through the opponents’ last defender with the puck and finished off a great individual play by going low glove on Lethemon for the goal.
– Samuel Fagemo was also one of the more noticeable players in the afternoon, highlighted by a tic-tac-toe, give-and-go goal with camp invitee Sahil Panwar. Fagemo also led the 35-minute scrimmage in shots with six.
– The Kings 2018 first-round draft pick Rasmus Kupari had an impactful scrimmage, burying a goal on a breakaway high glove. Concurrently, Kupari and Madden fit well together when on the same line, dictating both the puck and pace of play.
– The last player to stick out in the afternoon session was Aidan Dudas. Dudas, like the three aforementioned prospects, was a member of the Ontario Reign last season and so far has shown growth in the two days of camp. In today’s session, Dudas was impressive in consistently controlling the puck through the neutral zone, creating successful offensive zone entries.

Clarke, who was drafted by the Kings just over a month ago touched on his camp thus far, how playing in Slovakia prepared him and helped grow his game and his goals for this week.

Spence, the 2021 WJC silver medalist (Canada) who is expected to play for the Reign this season spoke to the media about his hopes for this coming season, how the WJC helped/hurt his confidence and what he hopes to accomplish this week.

We’ll be back with more coverage from development camp on Wednesday. The third day’s morning on-ice sessions have been bumped up with the forwards going out at 9:30 a.m. and the defensemen following at 10:15 a.m.

By Jack Jablonski
167 Comments
Looking to the Future