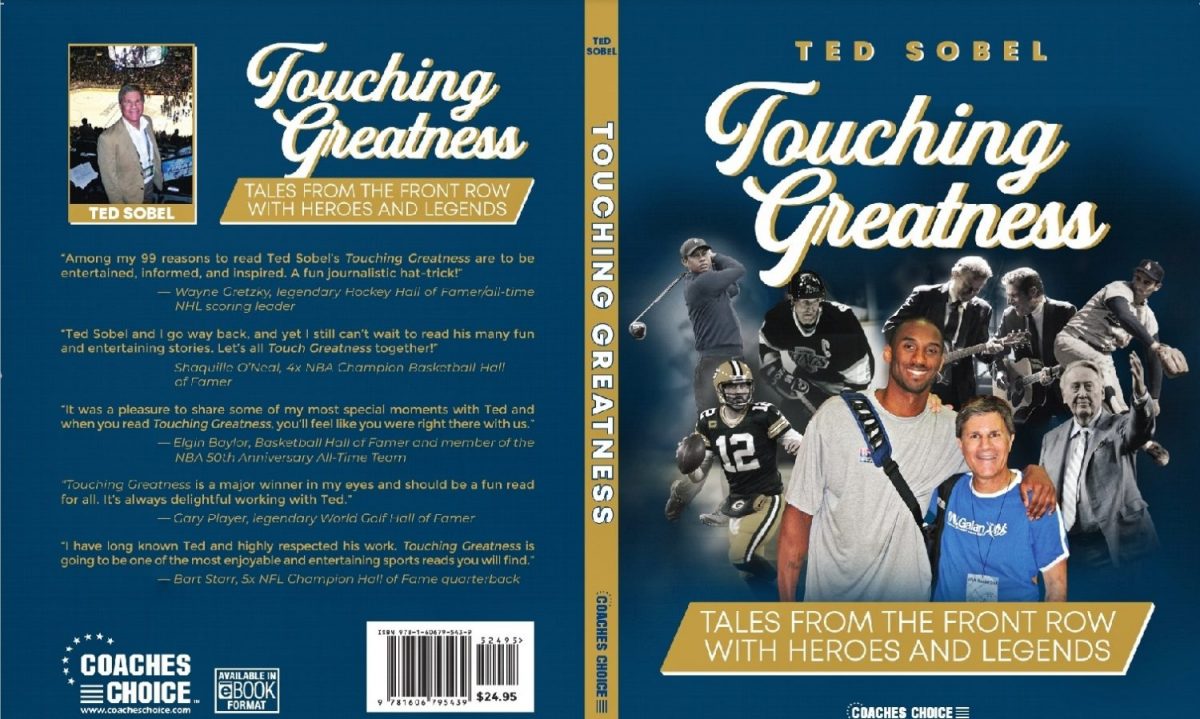 Written by Guest Contributor Ted Sobel – L.A. radio’s longest-tenured sports reporter and a Southern California native who has been credentialed to cover Kings hockey since 1974 (the same year Bob Miller began his HOF run in L.A.). Ted spent a decade calling pro and college hockey games and is now with Sports USA radio network, where he was the studio host for this past Stanley Cup Playoffs. Sobel is also set to begin his 17th season of doing the same for their NFL Sunday doubleheader broadcasts.

Becoming a hockey person in L.A. is a common thing these days, but not for someone who grew up here in the 1960s with only minor league ice play in SoCal. But here I am more than a half century later having written a book called Touching Greatness with a special chapter on covering the game at its highest level and with the ‘Great One’ not only the star of some my stories, but so nicely giving me his endorsement for all of you to enjoy these stories.

When Wayne Gretzky was introduced as the newest L.A. King in the summer of 1988, I was right there at one of the most storied news conferences we have ever witnessed. The game of hockey changed FOREVER when Edmonton sent Wayne to L.A. – on this day 33 years ago – in the biggest trade in North American sports history. The Babe Ruth of his sport was now entrenched in our neighborhood and every game and practice was a happening and it was a true pleasure to cover it all for your radio listening pleasure.

Here is an excerpt of one of my special behind-the-scenes Gretzky stories in Chapter 15 called: “Rinkside with the Great Ones”.

My dealings with Wayne Gretzky over the years have been spectacular, given that he’s one of the most down to earth real people who ever earned the title Superstar. I interviewed Wayne many times when he was a member of his Stanley Cup champion Edmonton Oilers. And there was one particularly interesting story regarding his team from the same 1982 playoff series, which featured the Kings’ famed ‘Miracle on Manchester’ win at the Forum (a game which, unfortunately, I did not attend). I was there, however, trying to get in without a ticket, as my usher connections didn’t come through that historic night. And just like then team owner Dr. Buss, I got to hear the comeback on the radio driving home.

Although no Stanley Cups during the Gretzky years (and just an illegal curved stick away, that changed all momentum), I had some high quality moments with “The Great One.” Among the most memorable was during the Gretzky watch in 1994, when each game would give him a chance to draw closer to Gordie Howe’s all-time goal scoring record of 801. I traveled up to San Jose, with Wayne just two goals away from catching ‘Mr. Hockey.’ And when he stole the puck right in front of Sharks goalie Arturs Irbe and beat him five-hole for goal #800, we could taste it.

The Kings trailed 6-5 late in that game, when they pulled goalie Kelly Hrudey in the final minute. There was Wayne again, standing on the doorstep for his own rebound tap-in tying goal for his team and with Gordie at 801. The sold out ‘Shark Tank’ suddenly became Gretzky fans and gave him his much deserved loud standing ovation (as they loved being a part of history too).

We left the Tank with Gretzky still needing one more goal to surpass Howe. I joked with Wayne afterwards that I couldn’t afford to keep following him around outside of L.A., so to PLEASE get that record breaking goal ASAP—and preferably at home!

Then, Gordie unexpectedly told me privately in the bowels of the arena, well after the game, that he was just too tired to continue this road show waiting for history to happen. As a result, he would be heading home and would have to enjoy the ‘Gretzky Watch’ from afar (and rejoin him soon after the record was broken).

The next game was at the Forum (without Howe in the building) on March 23 with the Vancouver Canucks in town. I did something I had never done before. Instead of sitting in my usual press box seat, I went down to the glass and watched from ice level, thanks to my usher friends who were nice enough to allow me to stand there. I parked myself in the Kings attacking zone to get a great view of hopeful history, and Gretzky rewarded my efforts by scoring his historic goal less than 50 feet away right in front of me (deep in the left faceoff circle) on a perfect return assist pass from his buddy Marty McSorley.

#802 made Wayne Gretzky the greatest goal scorer in NHL history, and he looked as relieved as he was elated (then holding or sharing 83 National Hockey League records—numbers that would’ve even made Babe Ruth envious). They stopped the game for about a 10-minute on-the-ice ceremony, during which Wayne addressed the crowd. We later had our normal postgame news conference and then got my usual reactions from as many players possible in the jubilant locker room.

You must know that since I was in radio, my sound would often not be played until the next morning. So, unlike the writers and most others, I had no tight deadlines and was able to milk my time in the joyous locker room on this very special night. Unintentionally staying until the very last person left the room, while waiting for the always last out of the shower (the very likeable McSorley) and just seconds away from leaving myself, suddenly the man of the night walked right up to me still grinning, and Gretzky said, “Ted, you’re probably the only guy I didn’t take a picture with tonight, so let’s get one!”

Breaking media etiquette because of this most unusual celebrated circumstance, he held the 802 puck in front of us, and team photographer Wen Roberts kindly snapped a few shots. Wayne then placed that historic puck in my hands, and we both laughed about what had just occurred. Wen and I were at last both done for the night (past midnight), walking out together, as Gretzky could finally fully unwind—after a long grind that obviously left him completely spent.

What an incredibly nice gesture from not only the star player that he was, but to think of me assuring that I got a keepsake of the occasion after one of his most celebrated personal achievements was amazing to me. Furthermore, that’s only half the story about this special picture.

Of course, the rest of that story and so many others are in the book which includes some of my other favorite interactions with Wayne, Gordie, Mario Lemieux, Jean Beliveau, and Kings greats Luc Robitaille and Marcel Dionne. And you’ll absolutely laugh out loud when reading how Wayne took me into the Kings locker room between periods of a game and helped to produce my first hockey business card.

As for now, I get to tease you about other hockey stories to come in future volumes of Touching Greatness, including my first Kings game as a teen when getting to stand alongside the bench in L.A.’s first Stanley Cup playoff Game 7 and interacting with Hall of Fame goalie Terry Sawchuk at the start of the third period in 1968 before taking a heart-breaking 9-4 loss to the Minnesota North Stars. Calling the action into my trusty cassette recorder on April 21, 1977 with the Kings facing elimination again vs. the Big Bad Boston Bruins in the conference semi-finals. That amazing almost come-from-behind third-period call helped to get me my first pro radio play-by-play job.

And of course there is nothing like getting to cover the ultimate, a Stanley Cup championship in your own town. And after a long 44 years of frustration, I got to do it twice in three years and share some special moments with Kings HOF broadcaster Bob Miller, who to this day has tears of joy when just bringing up those times. And Bob is the one who opened the door to one of my first hockey play-by-play gigs, his former place of employment WIBA Radio in Madison, Wisconsin.

That was the Miracle on Ice season that gave me a once in a lifetime opportunity to call a pair of our Team USA pre-Olympic games against U.W. And I’ll have an in-depth chapter on that experience when interviewing coach Herb Brooks just a few short weeks before his kids stunned the world at Lake Placid. And our coach ‘Badger’ Bob Johnson’s personal story of leaving us to see his son Mark win the Gold Medal was as special a time for me around this great game of hockey.

‘Touching Greatness’ is half memoir of being born and raised in L.A. in the 60s with enough music, entertainment, and sports stories for every person to enjoy, but covering the Kings over the past five decades has been an experience that I’m proud to write about and share with some of the most passionate fans anywhere.

Also in a scheduled future volume, I’ll include a chapter called ‘Living Slap Shot’ (when calling games in the same minor league a year after the movie was released), and when the home fill-in beat writer wanted to fight me while I was on-the-air calling a brawl on the ice (and in the stands) that produced police reports before the end of the first period.

Becoming a hockey guy has been a fulfilling part of my life and I thank you all for your support over the years to make ‘Touching Greatness’ a reality.

Touching Greatness by Ted Sobel is available on Amazon and at coacheschoice.com.

By Zach Dooley
119 Comments
Off the Ice

September 11th marks a day of internal reflection for many of us every year, perhaps none more in recent memory

By Zach Dooley
520 Comments
Off the Ice

Happy Wednesday, Insiders! It’s the final week without a hockey game until June. Think about that. Starting with rookie camp next