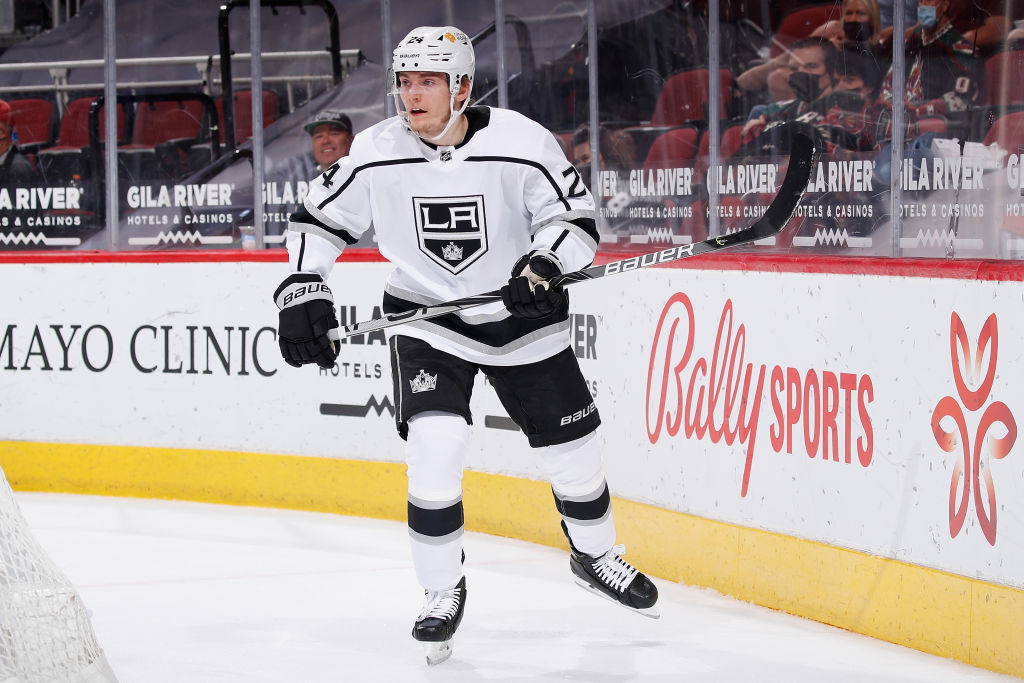 The LA Kings have re-signed forward Lias Andersson to a one-year, two-way contract, carrying an AAV of $874,125 at the NHL level. Like Andreas Athanasiou, who was re-signed yesterday on a one-year term, Andersson was one of six Kings players to receive a qualifying offer from the organization on Monday and is now signing his first contract with the organization, after he was acquired via trade last fall.

Originally acquired via trade from the NHL’s New York Rangers, in exchange for the 60th overall selection in the 2020 NHL Draft, Andersson completed his first season as a member of the Kings organization. In 23 games with the Kings, Andersson collected six points (3-3-6) to set a single-season career-high in goals and tied his career-best mark in points, set in 2018-19 during his time with New York. He also recorded 17 points (6-11-17) in 15 contests with the Ontario Reign and added a goal in the team’s lone postseason game. Before joining the Kings for the 2020-21 season, he played 19 games with HV71 of the SHL where he notched 11 points (5-6-11).

From an NHL perspective, Andersson had an interesting 2020-21 campaign, that ended on a high note, with the 22-year-old forward impressing during an extended run in the lineup at the end of the season. Skating on a forward line with Gabriel Vilardi and Alex Iafallo, he dressed in each of the team’s final 10 games and collected three points (1-3-4), a +2 rating and a CF% of 50.5. Other puck possession metrics favored Andersson as well over that stretch, with the Kings controlling nearly 53 percent of scoring chances and more than 54 percent of high-danger chances with the Swede on the ice.

Though the finish was impressive, Andersson had his share of ups and downs leading in. After he made the team out of training camp, Andersson struggled to maintain a regular spot in the lineup, playing in 11 of 12 games between January 19 and February 16, but just two NHL games between then and April 28. In none of those games did he exceed 13:30 of ice time, and his role fluctuated between the third and fourth lines, and between center and the wing, resulting in some time with the AHL’s Ontario Reign.

Andersson was a star in the AHL, scoring at over a point-per-game pace with Ontario, as he earned his way back to the Kings to close out the season. Plenty of players in his situation might’ve gone down with the wrong attitude or approach, but Andersson had the opposite mentality. He went down to work on areas of his game, eager to prove he belonged at the NHL level.

“He came to a new team, he played some games, he was in and out, he didn’t get to play a lot and we asked him to go to the minors just to get his game polished up and get some game action,” Kings Head Coach Todd McLellan said of Andersson. “He did that, he was very patient, every day he showed up at the rink and I don’t know how many times he walked by me and said ‘I’m ready’ and he was. When his number was called, he was ready, good for him.”

Andersson, like Athanasiou, presents another intriguing option for the Kings heading into training camp. Both players have played all three forward positions throughout their NHL career and played throughout the Kings lineup last season, ranging from the first line to the fourth line in Athanasiou’s case. With the additions earlier this offseason of Phillip Danault and Viktor Arvidsson, the Kings now have plenty of options at their disposal up front, with Andersson now fitting firmly into that mix.