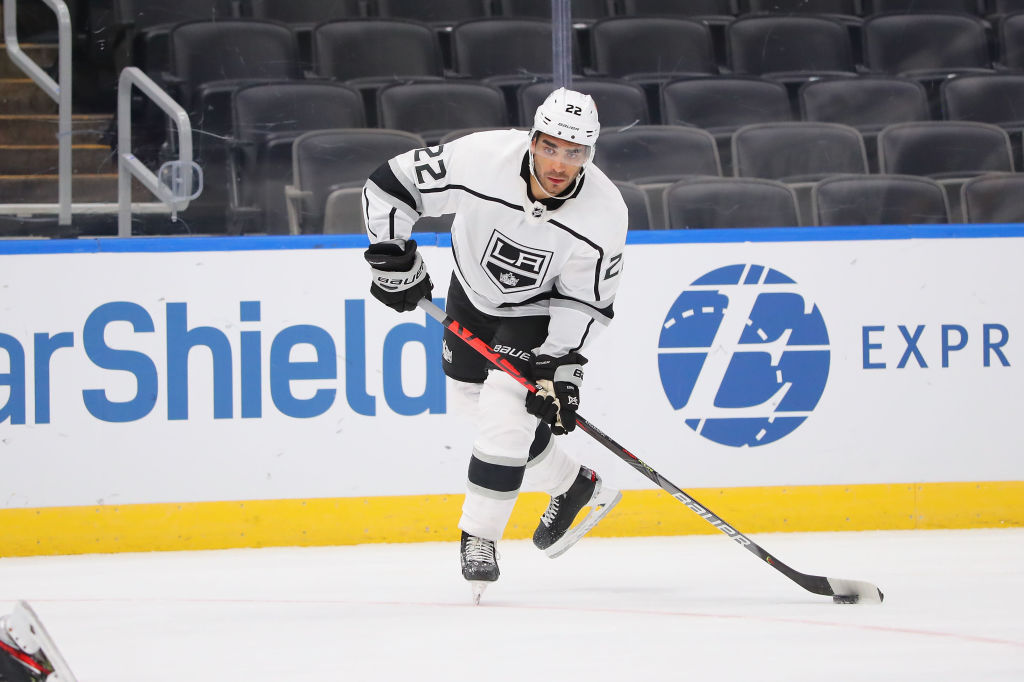 The LA Kings have re-signed forward Andreas Athanasiou to a one-year contract, carrying an AAV of $2.7 million. Athanasiou received a qualifying offer from the organization on Monday and is re-upping on a short-term deal with a raise from last season, after a pretty successful first campaign as a member of the Kings.

The Kings gave Athanasiou a qualifying offer on Monday, which would have entitled him to a one-year deal at the same rate as the 2020-21 season. the offer proved to be mostly semantics, however, with General Manager Rob Blake confirming yesterday that the two parties already had a deal in place, prior to the official qualifying offer.

The Woodbridge, ONT native scored at right around a half-point-per-game clip during the 2021-22 season, after signing a one-year contract during training camp. It’s been noted several times before, and we’ll note it again to reinforce the point. For better or for worse this season, things happened when Andreas Athanasiou was on the ice.

Athanasiou was a regular atop the “chances for” categories for the Kings. He was a Top 3 player for the Kings in terms of both scoring chances and high-danger chances for this past season, showcasing his speed, skill and offensive ability, as well as his propensity to get quality looks. All good things, on a Kings team that didn’t have a ton in the way of that mold of player.

“We don’t talk a lot about that, but his ability to escape out of crowds, or dart to open ice and buy him or his teammates some time is significant,” Todd McLellan said of Athanasiou. “He used it the other day, and it just adds a different ingredient into the mix and we’re fortunate to have him right now.”

On the other end, Athanasiou ranked in the Top 3 in terms of scoring chances and high-danger chances against per 60 minutes. Naturally, not as good, but it’s not as if the bad massively weighed down the good here. McLellan also talked about seeing improvement in Athanasiou’s two-way game throughout the course of the season, and that’s a trend in the right direction.

The numbers for Athanasiou were favorable and he returned well on the initial investment of a one-year, “show-me” kind of contract. Athanasiou is a former 30-goal scorer and joined the Kings for just over a million dollars per season. Now, on another one-year deal, the risk is not much higher, with the potential reward still pretty appealing. With the right linemates, it’s not hard to see Athanasiou producing in the middle six this season, in an area the Kings have scoring needs.

On a line with Blake Lizotte and Jeff Carter to open the season that was, Athanasiou collected five points (3-2-5) from seven games played, before he was sidelined on the NHL’s COVID-19 Protocol List. After exiting protocol, he went on to amass six points from his next 10 games, before an up-and-down conclusion to the season, featuring some multi-point efforts – including a season-high three points on April 20 versus Anaheim – but also a couple of scoreless spells, coinciding with the team’s general slide as a whole during the second half.

In terms of a fit, a one-year contract makes a lot of sense for the Kings, which keeps the organization’s options open moving forward. With plenty of cap space, the hit of the deal isn’t an issue, and Athanasiou keeps himself open for a longer-term extension if there continues to be a good fit moving forward. At just 26 years old, Athanasiou fits nicely into an age range that appeals to the Kings, providing a player who is still in what should be his prime years.

From his end, Athanasiou said late in the season that he had a strong interest in returning to the Kings. He talked about liking the area and wanting to be a part of the Kings, both this coming season and beyond.

“I’m looking forward to being an LA King hopefully next year and hopefully for a long time,” Athanasiou said late last season. “It’s been all pretty positive and it’s just a part of the business the way it goes. If you play your hockey, the off-ice stuff will take care of itself.”

With this deal, part one is done, and Athanasiou represents another strong option for the Kings entering training camp.