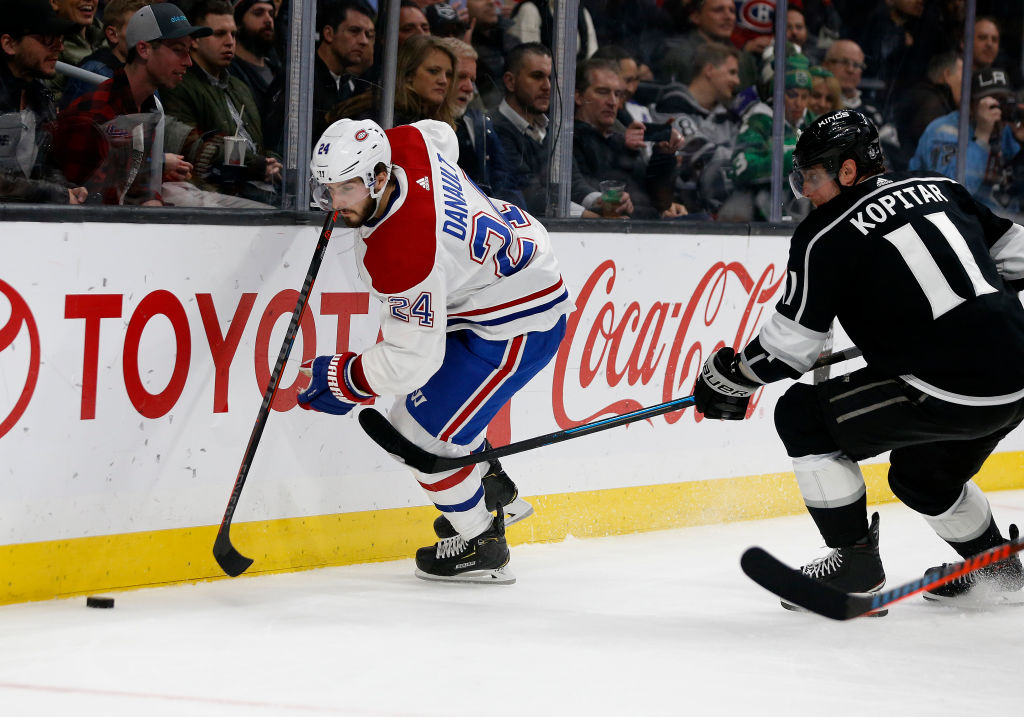 At the top of the LA Kings depth chart at the center position stands Anze Kopitar, one of the most well-rounded, two-way forwards in the NHL. Following first day of free agency, behind him stands another man in the two-way mold, Phillip Danault.

While few are at the level of a future Hall of Famer in Kopitar, Danault was perhaps the best available center during free agency. Throughout his time in Montreal, Danault established a reputation as one of the toughest forwards in the league to play against, with an ability to shut down some of the league’s best offensive players.

At the other end of the ice, Danault has posted points at better than a half-point-per-game rate, with his even-strength numbers ranking significantly higher compared to the league, on top of extremely strong possession metrics. Combined with that shutdown mentality, a strong, two-way presence has emerged.

“It’s good to be behind a guy like Anze Kopitar, he’s been a Selke winner, nominee a couple of times, it’s a really good model for me,” Danault said, during his first interview with the Kings organization. “I can relieve a little bit of pressure off his shoulders, checking some big lines, big players every night, so he can focus on his skills and his offense.” 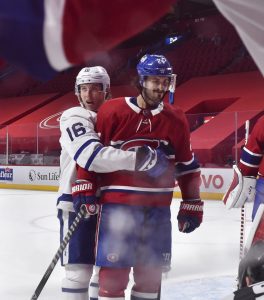 MONTREAL, QC – MAY 24: Mitchell Marner #16 of the Toronto Maple Leafs holds onto Phillip Danault #24 of the Montreal Canadiens during the second period in Game Three of the First Round of the 2021 Stanley Cup Playoffs at the Bell Centre on May 24, 2021 in Montreal, Canada. The Toronto Maple Leafs defeated the Montreal Canadiens 2-1. (Photo by Minas Panagiotakis/Getty Images)

For the most part, they also had the advantage in scoring chances and high-danger chances. Danault’s ability to not only defend well, but take the puck, transition it from defense to offense and create attempts for his team is among the league’s best.

As we discussed yesterday, Danault had the fifth-highest CF% of all forwards around the league with at least 700 minutes of 5-on-5 ice time. Those he trailed are all considered to be elite, first-line players, including the entire first line of the Colorado Avalanche, plus Aleksander Barkov. Looking at his point production, the raw totals might leave some disappointed. But take a deeper look into the numbers.

As Rob Blake made mention of during his availability yesterday, it’s the even-strength production.

If you can come to grips with the fact that Danault isn’t a goalscorer, you’ll see that he ranks 12th in the NHL in assists/60 over the last three seasons, during 5-on-5 play. Looking specifically at first assists, he’s a Top-30 player. In terms of points/60, Danault ranks directly between Sebastian Aho and Mark Scheifiele over that span. While he might not post eye-popping totals, the fact is, at even strength he’s been a very productive player.

“My two-way game has always been my strongest asset,” he said. “Trying to deny goals while also scoring some, good passing. I’m very proud to be there.”

These types of players are typically targeted during free agency. With underlying numbers influencing more decisions – as mentioned Blake referenced Danault’s even-strength abilities in terms of points and chance creation when talking about why to make the signing – it’s about more than just box score statistics these days.

So why Los Angeles?

With other options likely on the table, Danault called signing with the Kings “an obvious choice”, pointing to the role he should be able to play here, the opportunity to work with, and help develop, younger players, and the chance to be a part of an up and coming franchise as reasons why he signed with the Kings.

“I think it was a pretty obvious choice, to be honest,” Danault said. “They were the [team] that demonstrated the most belief in me and recognized what I did in the playoffs and during the season as well. They explained to me a role for the future, how they see me in the organization. They value me as a top player and it was an obvious choice with the history of the Kings. I’m pumped to be here in Los Angeles.”

The sales pitch has certainly gotten a bit more appealing in Southern California, too, than it was in years prior.

For the last two summers, the Kings were more apt to move veterans for futures than the inverse. Though players like Martin Frk and Ben Hutton were added, to fill immediate NHL voids, the Kings were not major players for the big names when the free-agent market opened. That has changed, however.

Rob Blake said that he and the Kings laid out potential roles for Danault both in the present and the future of the organization, and the Kings were happy to see that he bought in. 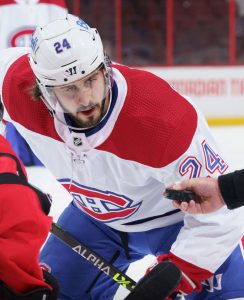 OTTAWA, ON – FEBRUARY 6: Phillip Danault #24 of the Montreal Canadiens prepares for a face-off against the Ottawa Senators at Canadian Tire Centre on February 6, 2021 in Ottawa, Ontario, Canada. (Photo by Andre Ringuette/NHLI via Getty Images)

“I’m not sure it’s a sales pitch, we just went in and explained this is what our team is going to look like this year, next year and the year after, and the holes that we felt we needed to fill,” Blake said of Danault. “We went over our prospects, we went over the ones we felt could get into our lineup, when we felt they can get into our lineup and what it would do to solidify the middle of the ice. We’ve done this for a number of years, but the different part here is we’re showing him how we’re going to get better and when and how we want to be competitive and move forward. It was just as exciting for us to be in that, because it’s a much different approach than the last two years when we had to pull really top-end players out of our lineup.”

The personal connections and approach taken by the Kings also played a big factor in the signing.

Danault noted that he had positive conversations with Blake, Luc Robitaille and Todd McLellan, amongst others, who made him feel confident and comfortable with the role he’d likely be filling with the Kings. A believer in having three strong centermen, Danault was less concerned with whether he’d be labeled as the second or third-line center, and more concerned with his overall fit here. On that front, he was sold.

“They showed me a lot of belief, they were all over me these last couple of days,” Danault said. “They told me about the role, they believe in my offensive side, and they obviously told me a lot about the young kids coming up, and I can be a great mentor for these guys, with Anze, Drew and [Jonathan Quick]. It’s been a crazy last couple of days, but very happy to be here.”

Both parts of that quote are important.

Danault bought into the present – which will likely see him centering the team’s second line – and the future, which will see several, talented prospects pushing for full-time NHL roles. As one of the more veteran players on a still young and growing Kings team, Danault’s value isn’t just in the present, but with how he can contribute both now and moving forward, helping his new teammates along the way.

In the here and now though, the Kings have as much variety when it comes to lineup construction at the forward position as they’ve had in recent memory. With Danault now amongst the options added into the mix, the Kings have an array of different skill sets at their disposal in the fall, and it’s certainly exciting to think about the different options for the team come September.