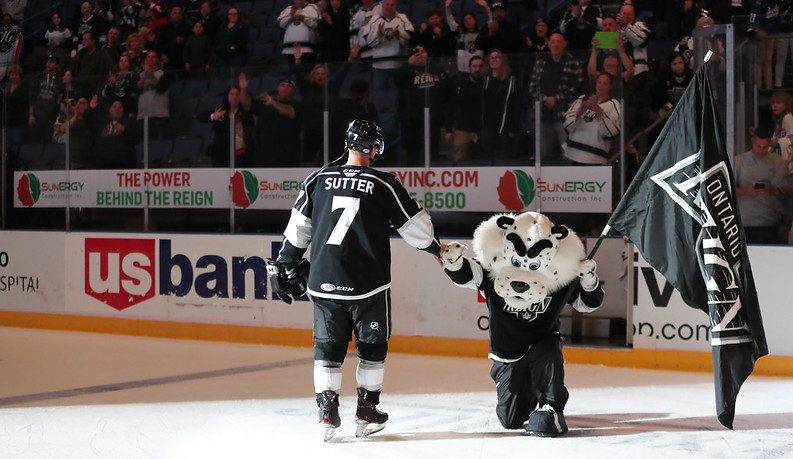 2 schedules in less than 24 hours? How about it, Insiders!

The Ontario Reign, AHL affiliate of the LA Kings, announced their 2021-22 schedule earlier today. The Reign are slated to play 68 regular-season games, including 34 at Toyota Arena in Ontario, beginning on Saturday, October 16 at home against the San Diego Gulls. A Saturday evening, home opener against San Diego to welcome fans back into the building for the first time in 20 months? If you’ve been to an Ontario / San Diego rivalry game, you’re already starting to get hyped!

From a Kings perspective, highlight Sunday, February 20 on your calendar. This falls right in the middle of the potential Olympic break, and is a prime game against San Diego in Ontario. An excellent opportunity to check out the organization’s top prospects with Sunday traffic much preferable to Friday traffic! 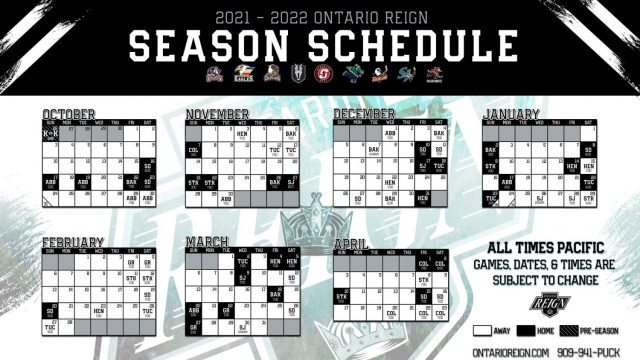 Highlights of the 2021-22 Reign regular-season schedule –

– 29 of the Reign’s 34 home games occur on either a Friday, Saturday, Sunday or holiday

– The Reign will host 10 Friday night games, eight Saturday games and 10 Sunday games, all taking place at Toyota Arena in Ontario, as well as a matinee game on Martin Luther King Day in mid-January.

– Ontario will also host one game on a Monday evening, as well as two games apiece on Tuesday and Wednesday evenings.

– The busiest month of hockey in the Inland Empire this season will be March, with eight home games, followed closely by January, which will see the Reign on home ice seven times. On the contrast, the Reign will have just one regular-season home game during the month of February.

– The busiest months for the Reign overall will be January, February and March, with Ontario playing 11 total regular-season games in each month.

– The longest homestands of the season will be five games, with the Reign at Toyota Arena for five straight on two occasions. Ontario will open the season on home ice, from October 16 – October 23, and will also host five consecutive games from December 31 – January 14.

– Though not on one consecutive trip, the Reign will play eight straight games on the road from late-January through early-February. The Reign will visit San Jose, Stockton, Grand Rapids and San Diego from January 26 – February 19, with a season-high 27 days between home games.

– The Reign’s most frequent opponent during the 2021-22 season will be the San Diego Gulls. The So-Cal Series, the AHL’s version of the Freeway Faceoff, will occur 12 times, including six games in Ontario.

– Two new teams will visit Ontario this season – The newly branded Abbotsford Canucks visit the Inland Empire for the first time in October, while the Henderson Silver Knights head West on New Year’s Eve. The Grand Rapids Griffins will visit for the second time in franchise history, following their inaugural trip to California in April 2019.

A ticket package, with one ticket for Opening Night and one ticket for Kings vs. Kings, is available by visiting ontarioreign.com/kingsvskings. More information regarding the Reign’s 2021-22 promotional schedule, as well as information on single-game tickets and the 2021 preseason schedule will be released at a later date.

Collectively, the group of forwards at this week’s LA Kings Development Camp has more experience than what you’d normally see

Insiders, introducing you to the newest contributor here on LA Kings Insider, Jared Shafran! Jared will be primarily responsible for providing