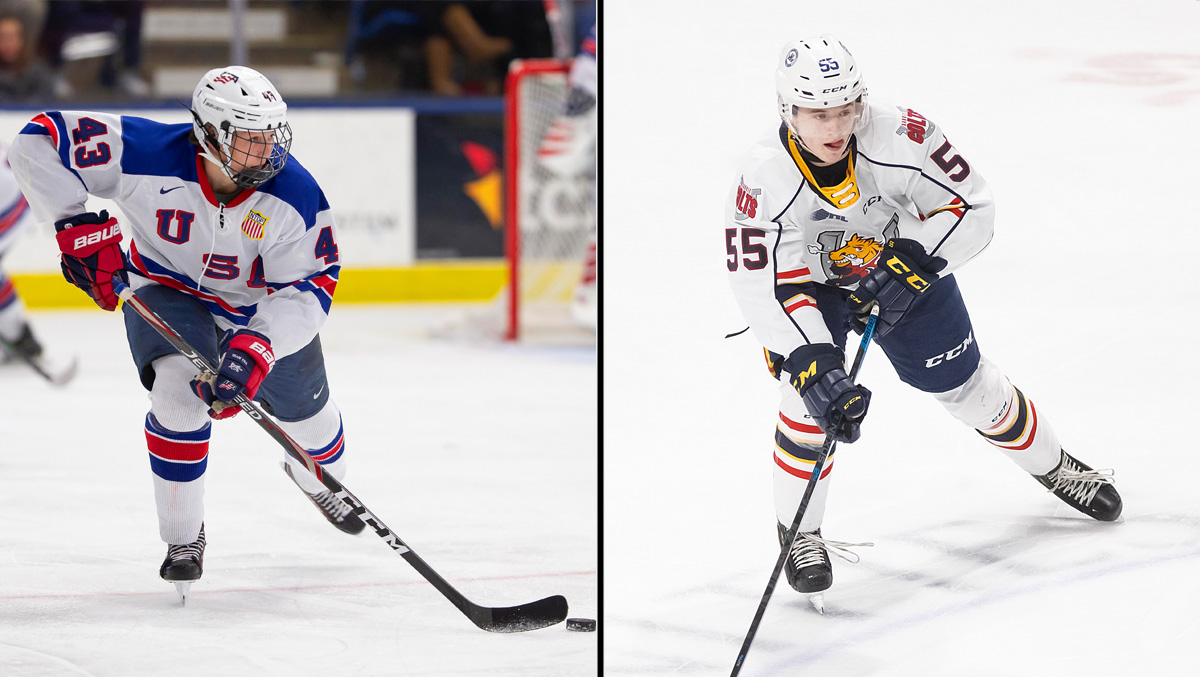 With the NHL Draft coming up quickly, this Friday and Saturday, LAKI takes a deep dive into the possible options for the Kings at their No. 8 draft position in the first round.

Summary
Brandt Clarke brings a different package to the group of four defensemen atop the NHL draft board. First off……he shoots right! Secondly, Clarke is an offensive-minded defenseman, who seems to have those high-level traits in the offensive end in a number of ways, though his skating style leaves some wanting to see improvements or alterrations. Regardless, Clarke is considered to be mobile offensively, with top-of-the-draft traits in the offensive end that many teams covet.

On what he developed playing professionally in Slovakia this season
I think my all-around game, my two-way game. You look at the numbers, we were the second-lowest budget team in the league, we didn’t have a lot of high-powered offense, we had to win games 2-1, 3-2, it was always low-scoring. It was always a fight, we were a younger team that wanted to prove that we could hang with teams that were established in this league. I think my overall game was polished up pretty nicely over there.

On his work ethic and desire to improve
I’m going to be working hard, being the hardest-working guy in the gym, skating every single day just to hopefully hit my ceiling of an elite NHL defenseman one day.

Bob McKenzie, TSN
Clarke is an offensive defenceman with elite hockey sense and skill who is projected to run an NHL power play, although he has a bit of awkward, knock-kneed skating style.

Chris Peters, Hockey Sense
He is a really interesting player. He’s a highly offensive defenseman. He’s got some of the best offensive upside I’ve seen in this draft class. In terms of the defense, and I think the one thing that we’ve all talked about among the prospect writers and the scouts is the skating needs to improve for him to be a top-level guy. He has the brain. He has the mobility as, you know, all those other tools. So, if he can refine that skating he could really be an important player for whoever drafts him because he is so offensively gifted and offensively talent.

Tony Ferrari, Dobber Prospects
Starting the year as my top defenseman and despite flipping back and forth with Luke Hughes for much of the year, Clarke is back atop the blueliner list. His skating isn’t pretty, and honestly looks strikingly similar to my own stride, but the four-way mobility and cerebral mind for the game make him a difference-maker on every shift. He controlled play regularly in a men’s pro league in Slovakia and then was the best defender at the U18s, on route to a gold medal for the Canadian squad. His play in his own end is a work in progress but there has been steady progress. His offensive instincts often make him a fourth attacker on the play. He doesn’t just join the rush, he integrates himself into every play.

Clarke, for many teams, is that coveted, right-hand shot defenseman that many prospect pools are lacking. For the Kings, however, the team does have 2020 second-round selections Brock Faber and Helge Grans already at that position, but when looking at a Top 10 selection, best player available has to be taken into account over positional need. Simply put, if the Kings view Clarke as the top available player, the Kings should take him with that pick, regardless of the other players available. With his high-end offensive abilities, Clarke would be a great fit for the Kings if selected with the eighth-overall pick.

Summary
Luke Hughes, slated to become the third Hughes brother selected in the first round of the NHL Entry Draft, is another talent to come out of the USNTDP. Hughes scored at nearly a point-per-game pace in the USHL this season from the blueline, and was close as well in other games played with the NTDP outside of the league.

Hughes is one of the group of four defensemen projected towards the top of the first round of this season’s draft. Hughes is a good blend of abilities, bigger than you might expect from a speedy puck-mover, but with skating and offensive ability better than you’d expect from a “big guy”, though he’s not exactly massive. Hughes has terrific lineage and development and is considered to be one of the highest upside picks in the entire draft.

On what he’s learned from his brothers from the draft process
I think they taught me, going into the year, that you’ve got to be ready for everything, you have to stay level-minded, can’t get too high or too low going through the year. I think that really applied to me this year, because with all of the COVID implications, being shut down, quarantined, at numerous times throughout the year, you’ve got to be level-headed.

On his own game, his strengths as a defenseman
I can play in all situations, I can play on the power play and the PK, I can defend a cycle, defend the rush and defend the cycle. I’m really poised with the puck in my transition game and I think a big part of my game are my exits and entries. My exits out of the d-zone, entries into the offensive zone. In the offensive zone, I think I’m pretty deceptive with the puck and I try to make things happen.

Mike Leone, USNTDP Assistant Coach
Luke is long and rangy. It’s known that he can really skate and I thought he took a lot of steps in the right direction with his defending ability this year, and that starts with his skating, his ability to kill plays in the neutral zone with his skating, and his ability to defend 1-on-1 plays. I thought he grew a lot as a player and really made strides in his game to become a really good defender in his own zone.

Sam Cosentino, Sportsnet
You have great familiarity with the Hughes family. This guy’s a little bit bigger than his brothers. I think he defends better than Quinn at this age, and I think a guy who has tremendous offensive upside, you know, just around a point per game with the U.S. under-18 program and a nine-game point streak throughout the course of this season when he was healthy. And the fact remains that he’s a lot like his brothers and that he has tremendous confidence with the puck. But the skating, the edge work, the elusiveness in his game are all very much like Quinn and Jack.

Elite Prospects Draft
Hughes starts with the perfect skating posture, settling comfortably into his stride as he darts around the ice. His skating habits are pretty stellar, too. Hughes collects the puck in-stride, skates through his passes, and weaponizes movement to draw opposing defenders to his orbit, creating space for his teammates. He’s always looking to create advantages with the puck on his stick.

Similar to what we wrote above for Owen Power, and similar as well to Simon Edvinsson, Hughes would be a nice add as a left-shot defenseman for the Kings. Hughes has that modern defenseman blend of skills, providing solid defensive talents as a player who can also move himself, and the puck, well. In today’s game, players need to be able to skate, and need to be able to do a variety of different things well. Hughes brings a lot of that.

Like Power, Hughes is typically projected to be off the board before the eighth-overall selection, however he’s also fallen that far in some predictions as well. With a lack of consensus at the top this season, consider Hughes to be one of many in that may or may not be there” boat.

For more draft-eligible prospect content, you can find that on All The Kings Men as Jack Jablonski is joined by draft experts to break down the 2021 Draft class in segmented groups.

By LA Kings Insider
26 Comments
Looking to the Future

By Zach Dooley
127 Comments
Looking to the Future