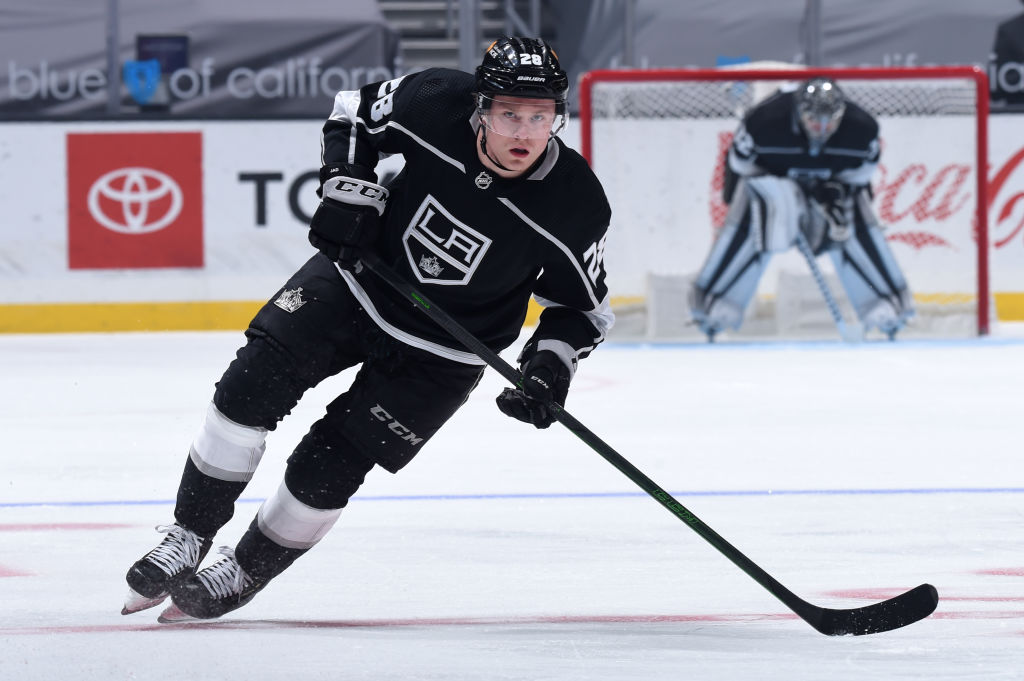 At last we’ve reached the end of our Seasons in Review series, finishing up with another rookie down the middle in Jaret Anderson-Dolan.

After looking at Gabriel Vilardi on Wednesday, it’s only fitting to pivot to Anderson-Dolan today. The two Canadian-born forwards have come up together through the ranks, after being selected as the Kings’ top two picks in the 2017 NHL Draft. Both were important pieces of the 2019-20 Ontario Reign, both began to establish themselves in the NHL this season and both won gold medals with Team Canada at this season’s World Championships in Latvia.

Anderson-Dolan began the season on the outside looking in, as a member of the taxi squad as opposed to the active roster. Once he got his shot though, in early-February, he never looked back, as he provided an energetic, hard-working option in the bottom six throughout the season.

Trending Up – 7 goals from 34 games played translates to roughly 17 goals over the course of an 82-game season, which would be more than sufficient for a bottom-six center. On a per/60 basis, no Kings player produced more goals at 5-on-5 this season, with JAD’s 0.93 mark topping the charts. Among first-year forwards across the NHL, Anderson-Dolan ranked eighth in the league in that category.

Anderson-Dolan also impressed with his energy, work ethic and forechecking ability, traits and qualities which shined through when skating on a line with Carl Grundstrom and Trevor Moore. With those two on his line, Anderson-Dolan saw both his raw production and possession metrics shoot up, similar to how it boosted Grundstrom’s numbers. That trio was effective for the Kings in a variety of different stints together, as a buzzing, forechecking unit, using their own style to create offensive opportunities off of the forecheck.

“We can all skate, we all know that, we know that’s what’s going to give us success,” Anderson-Dolan said of the line. “I think that physicality, that comes with being on the forecheck, can turn the tide of the hockey game pretty quick.”

There are also those buzzwords that get thrown around, that you can’t measure with statistics, that seem to stick with Anderson-Dolan. Character, leadership, intangibles, all of those other hockey guy terms that you like to hear – those words have consistently been applied to Anderson-Dolan something that only grew during his rookie season.

Trending Down – In a lot of ways, we got a good glimpse into what Jaret Anderson-Dolan can be, and a lot of the traits that he possesses. But we still leave the 2020-21 season wondering exactly what his end result is. Is he a player who can produce enough to center a second line one day? Can he up his possession metrics, produce well enough offensively while being a standout player defensively and become an ideal third-line center? Or does he project more as an energy player, someone best suited for the fourth line?

All questions that remain outstanding.

Anderson-Dolan’s role was predominantly on the fourth line this season, and his possession metrics were generally on the lower end compared to his teammates, a trend that was emphasized when playing away from Grundstrom and Moore, as was also the case with Grundstrom as well. Not necessarily unexpected for a young forward, but certainly an area where you’d like to see progress.

For a player who could craft a role as an effective defensive player, you’d also like to see his faceoff percentages jump a bit. Anderson-Dolan’s faceoffs-won percentage at just under 44 percent was the lowest amongst regular centers, a number you want to see go up for a player you might trust to be on the ice late in games, defending a lead.

2021-22 Status – Anderson-Dolan has one season remaining on his entry-level contract. His 2020-21 season was a good introduction to the NHL, and now he figures to battle for a bottom-six center position with the Kings during training camp.

Anderson-Dolan slots into a group alongside Vilardi, Quinton Byfield and Blake Lizotte vying for icetime down the middle behind Anze Kopitar. While he’s played almost exclusively in the middle as a professional, Anderson-Dolan has the versatility to play on the wing as well, though not at the professional level.

With many positives from the season that was, and still being early in his development process, Anderson-Dolan figures to currently sit on the inside track for a roster spot come September, though as always, performance during training camp will help to shape and control that narrative.