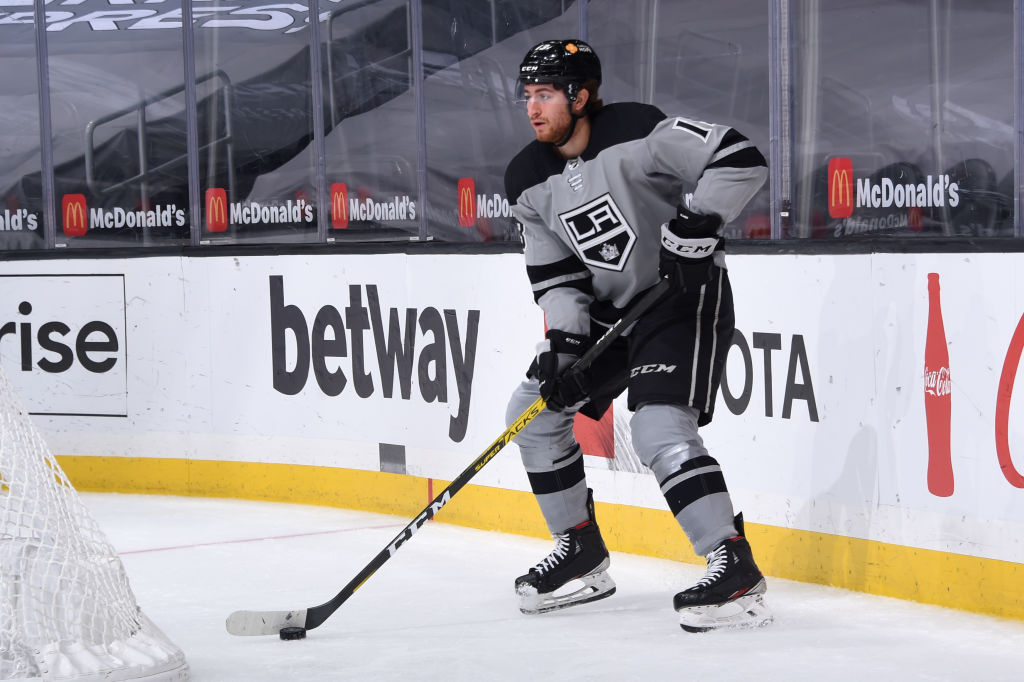 After a look at Anze Kopitar’s milestone campaign earlier this week, today begins our dive into the rookie pivots, beginning with Gabriel Vilardi.

The highly-touted, 2017 first-round selection had his ups and downs, as most rookies do, but through it all was still one of the NHL’s most productive rookie skaters, ranking in the Top 10 in assists and points.

For better or for worse, Gabriel Vilardi was a hot topic of conversation among Kings fans and media alike this season. Vilardi’s arrival at the NHL level had been long-awaited, and with injuries costing him nearly two full seasons worth of time, seeing him crack the opening night lineup was a very welcomed sign for the 21-year-old centerman.

When at his best, Vilardi was a playmaking center, who used his hockey sense and offensive abilities to create opportunities for himself, and his teammates. He had productive stretches, mixed with unproductive ones, as he navigated a (mostly) full season at the NHL level. Vilardi’s ups had him on the outer edges of Calder Trophy conversations, while his down had him out of the lineup. At the end of the day though, a good introduction for a player with a bright future in Los Angeles.

Trending Up – Vilardi had a productive rookie season by most standards. As noted above, his 13 assists and 23 points ranked in the NHL’s Top 10 for first-year skaters, and he was one of just six rookies to average more than one assist per 60 minutes at 5-on-5. On the Kings, Vilardi ranked third on the team in individual points per 60 minutes at even strength, trailing only Anze Kopitar and Andreas Athanasiou.

Vilardi also showed progression throughout the season. Following a short stint out of the lineup, Vilardi was put back into the mix with a message offensively – use your shot.

“I think just shooting it, less thinking,” Vilardi said of his adjustments. “I felt like, before I was trying to make the perfect play, or set someone up and have them have an empty net, whereas I have to trust my linemates, trust the other guys and shoot. You watch the top players, they shoot, and when you shoot, it creates more opportunities. It creates the defense scrambling a little bit more, that’s when you get guys out of position and that’s when things open up. Stuff opens up off the shots and I’m starting to learn that and realize it, I’ve got to keep shooting, because it creates more, rather than not shooting and trying to make the perfect play.”

Vilardi saw an uptick in individual Corsi For, scoring chances for and high-danger chances for in the 16 games following his time out of the lineup, including more than double in the high-danger category. His production matched, as he posted a .62 points-per-game rate to close the season, up from .37 in the games preceding.

It’s also important to point out that we saw Vilardi play his first healthy season since he joined the Kings organization. Vilardi missed extended time at the end of the 2017-18 season with Kingston in the OHL, missed nearly the entire 2018-19 season outside of four games with the Ontario Reign, and didn’t get started last season until November. The Kingston, ONT native was on the active roster for the entire 2020-21 campaign, without missing any time due to injury. That is a massive positive.

Trending Down – In the midst of an unproductive stretch, with three assists and a -7 rating from 12 games played, Vilardi found himself moved from the second line, down the depth chart to the fourth line, and eventually out of the lineup entirely as a healthy scratch. He’s not the first young player to sit a couple of games out, and he certainly won’t be the last to do so. Vilardi gave an open and honest answer about the adjustment process from the AHL to the NHL, with the excitement of even two days between games showing the grind of this season’s slate.

“It’s different, it’s really different,” Vilardi said of the schedule here. “Especially with this year, we’re playing every other day almost, it’s nice we had two days off here, it’s really, really nice. Just kind of let go of the game a little bit and relax. It’s hard, but at the end of the day, it’s what I want to be doing. I’m happy, because I get to do it.”

Todd McLellan referenced wanting to see more of a two-way game from Vilardi, seeing improvements at the defensive end of the ice, in addition to his offensive gifts. Vilardi made some strides in that area as the season progressed, but consider it a continued area of emphasis as he looks to gain more trust from the staff. Seeing a more consistent game from Vilardi, building upon his offensive production while rounding out the other areas of his game, could be a dangerous combination if all put together.

2021-22 Status – Vilardi still has one season remaining on his entry-level contract and will likely slot himself back into a middle-six position in the Kings lineup during the season to come.

With Anze Kopitar manning the number-one center role, a tandem of Vilardi and the emerging Quinton Byfield on the second and third lines seems, at this time, the most likely route forward. Vilardi, however, does have the ability to also play on the wing, and a big-bodied player with top-level hockey sense and a good combination of passing and shooting abilities could also play a valuable role on the right side of a forward line, potentially filling a need internally while also opening up minutes for others sich as Jaret Anderson-Dolan or Blake Lizotte.

Versatility is a great thing, and Vilardi brings some of it with him into what is hopeful to be another strong season in his development curve.