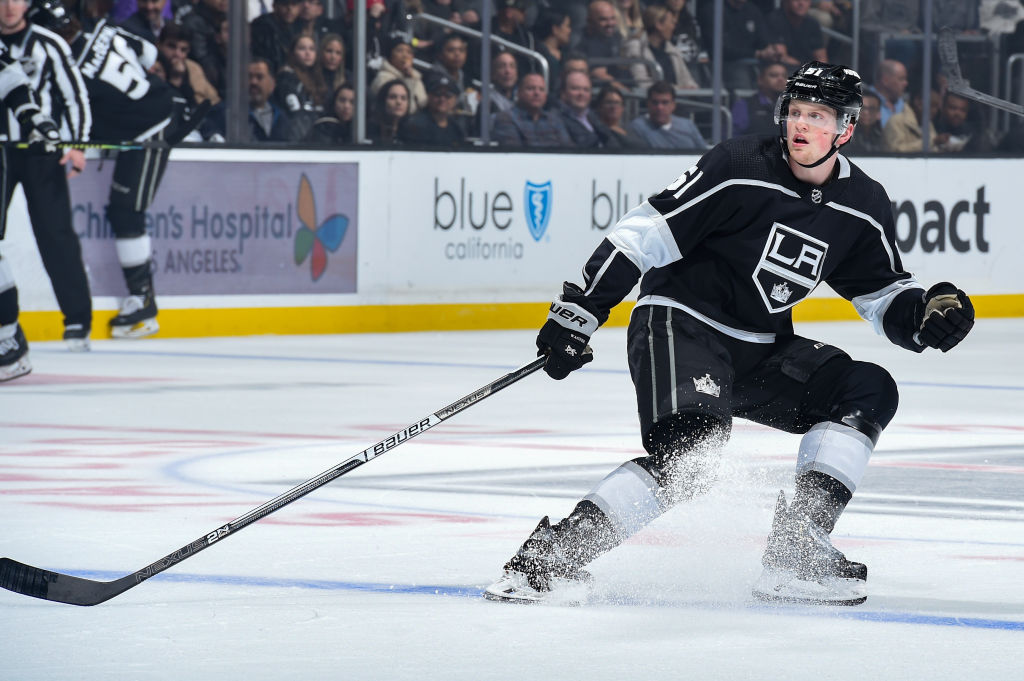 We’re approaching the home stretch here, with the final four Kings seasons in review, as we cap off the wingers under contract with a look at Austin Wagner.

After today’s look at Wagner’s 2020-21 campaign, we’ll focus in on the team’s centers, before concluding the series in time for the submission of team’s protected list on July 17, followed closely by the expansion draft, NHL Draft and free agency timelines.

Wagner completed the first season of a three-year extension, as he appeared in 44 games for the Kings, skating predominantly in the bottom six. You know what you’re getting from Wagner in the skating department – the man is fast – and he is continuing to work on rounding out the rest of his game, now with three NHL seasons under his belt.

Trending Up – On a per/60 minute basis, Wagner saw his offensive totals increase from the 2019-20 season, including an uptick in goals, assists and points. Though they did not reach the totals he amassed during his rookie season, when he netted 12 goals, Wagner did see his numbers bump up a bit from 2019-20.

Look, we all know that Wagner has excellent skating ability, and he flashed it on all four of his goals this season. While the knock on Wagner is that he doesn’t finish a high enough percentage of his looks, all four of his tallies came on breakaways or partial breakaways. His goal off the rush in Vegas on 2/5, followed by his goal out of the penalty box against San Jose a week later, his breakaway finish in Minnesota later that month and his goal versus the Golden Knights on 4/12 were all examples of how his skating ability can create offense.

At the end of the day though, it’s not Wagner’s offensive totals that he’s being judged on, at least internally by the Kings coaching staff. Wagner isn’t necessarily relied upon to be a goalscoring winger, he’s looked at to provide a spark as a bottom six player, forecheck effectively, create turnovers and give the Kings something they aren’t getting anywhere else. At times, we certainly saw that from Wagner. His skating ability, when put into practice, gives him an advantage over just about any player in the league. When used effectively, we saw what Wagner can be, and how he can be a contributor for the Kings moving forward.

Trending Down – Consistency. We know what Wagner can be, we’ve certainly seen what he can be, and now it’s about seeing it on a game-to-game basis.

“We expect more from him on a night-in, night-out basis, with his speed, his tenacity, the forecheck has to be a part of his game and he has to create turnovers for himself and for his teammates too,” Todd McLellan said. “There’s not a lot of talk about those ‘magic moments’ as you call them, that’s the icing on the cake, we need all the other ingredients from him.”

Wagner’s possession metrics, relative to his teammates, were pretty much in line with the team average, as he never ranked close to either end of the spectrum, but was generally slightly below the team’s midpoint. Where his numbers were the lowest was in terms of actual goals allowed. No Kings player had a larger discrepancy between actual goals for/against and expected goals for/against, with his actual GF% the lowest among Kings regulars, but his expected falling right in the middle of the pack. Among NHL regulars, Wagner’s .942 PDO ranked fifth lowest in the league, indicating that the underlying numbers were better than the raw ones.

A lot of the things you could have said about Carl Grundstrom’s season could also be repeated for Wagner. With an extension signed, there is a mutual commitment made, and both have separated themselves from certain members of “the pack” if you will. But the pack is still growing and evolving, and as the Kings grow, so will the level of standard required to be a regular with the team.

2021-22 Status – Wagner is entering the second season of a three-year contract extension that was signed in September of last year. Wagner’s cap hit is just over a million dollars per season, not taking up a significant portion of the cap by any means, fitting for a bottom-six forward.

Wagner has excellent physical gifts and continues to grow and improve as a player. Turning more of that ability into a reliability and consistency in the bottom six will go a long way towards cementing a permanent, and perhaps expanded role for Wagner moving forward.

By Zach Dooley
209 Comments
Behind the Scenes