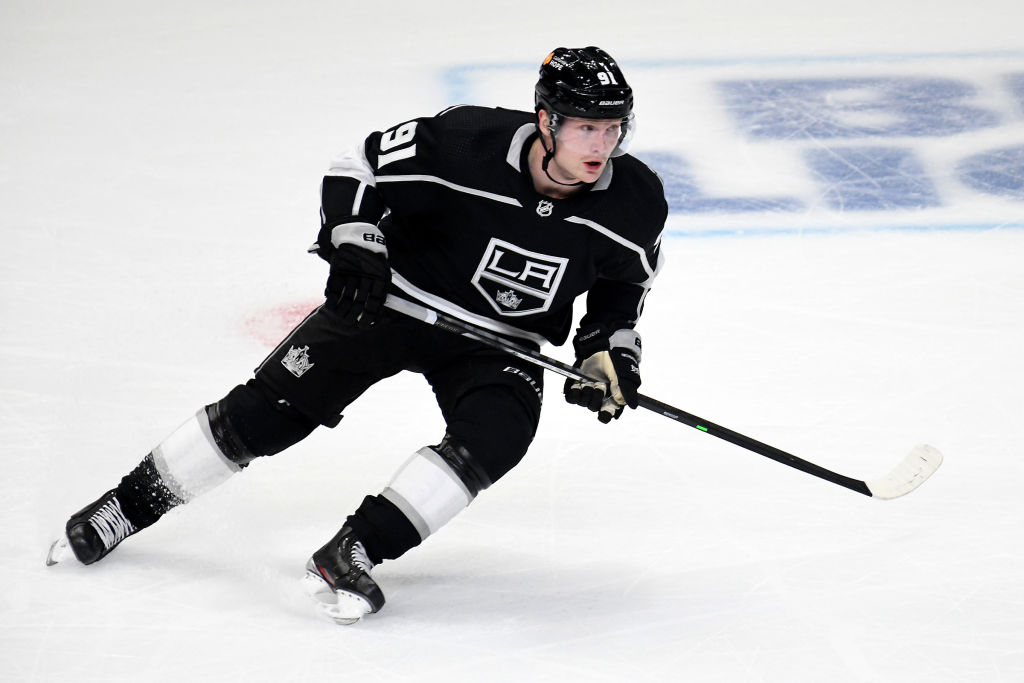 Insiders, hope that everyone had a great holiday weekend!

We’re back, and back in action with the player seasons in review, picking up where we left off, on the left wing with Carl Grundstrom, who completed his fourth professional season and his first full campaign at the NHL level.

As always, included below is an audio evaluation with Jesse Cohen and Daryl Evans of the LA Kings Audio Network.

After spending the last two seasons split between the Kings and the AHL’s Ontario Reign, Carl Grundstrom made the opening-night roster this season and never relinquished his spot, spending the entire season at the NHL level. Grundstrom maneuvered between positions in the lineup, working his way mostly around the bottom six at both winger positions, as he appeared in a career-high 47 NHL games.

Trending Up – At his best, Carl Grundstrom is a hard-nosed, physical presence on the forecheck, capable of creating turnovers in the offensive zone and turning them into offensive opportunities. At times this season, we saw that player. Grundstrom plays a heavier game than most and has a solid shot for a player who isn’t necessarily expected to be a point producer.

His best qualities were emphasized when paired on a line with Jaret Anderson-Dolan and Trevor Moore. Grundstrom, when playing on that line, saw his possession numbers jump up, controlling more shot attempts, and a massively large jump in scoring chances and high-danger chances when a part of that unit. That line controlled more than 55 percent of high-danger chances when together, a massive jump from Grundstrom’s individual totals.

“I think we’re all skating, helping each other out,” Grundstrom said. “We want to play fast, and I think we have the same mindset. I think that’s a big key.”

Grundstrom showed to be one of the team’s better forecheckers throughout the course of the season, again a trait emphasized when playing with Anderson-Dolan and Moore, who shared similar beliefs.

Similar to what he showed as a rookie in 2019, Grundstrom also has an ability to get to the front of the net and create goals in tight spaces. Four of his six goals this season came either as redirections in front, or goals right in or around the blue paint. The other two – goals in St. Louis and Minnesota in January – showcased his wrist shot, but he’s made most of his money right outside of the crease and has shown an ability to generate offense in those dirty areas.

Trending Down – With Grundstrom, when he was on his game, you really saw the type of player he can be, the player mentioned above. We just didn’t see that player every night. Getting night-in, night-out consistency is perhaps the hardest thing for a young player to achieve, and we saw elements of inconsistency, game to game, from Grundstrom this season.

His raw production, when put into perspective with his ice time, is fair for a bottom-six player, though his possession numbers, looking especially at scoring chances and high-danger chances, rate below team averages. Separating Grundstrom’s figures when playing on a line other than with Anderson-Dolan and Moore see his totals fall, particularly in the latter two categories. It’s not the end all, be all, and it’s certainly not a bad thing to click with a certain line, but you’d also like to see players be able to post solid metrics in multiple situations as they develop.

In a lot of ways with Grundstrom, we don’t leave the 2020-21 season with a clearer outlook than when we started it. Entering, was saw a player with a pretty unique toolbox among the Kings forwards, and that stays the same exiting it. We also saw a player who had yet to establish a full-time role at the NHL level, and we find ourselves asking the same question here in July.

2021-22 Status – Carl Grundstrom falls into a similar situation as many of the other young forwards on the Kings roster, which will be pushing and fighting for an NHL roster spot come September.

He did separate himself from other certain individuals on the so-called “bubble” this season, but he will need to continue that process entering the season to come.

The Kings have several wingers on the fringe, with a new player added to the mix in Viktor Arvidsson, who will likely be positioned in a Top 6 role come training camp, taking up one more spot amongst the 12 in the lineup. Grundstrom’s chemistry with Anderson-Dolan and Moore creates an interesting possibility as a potential third or fourth line for the Kings, but with several younger players pushing for opportunities, and eventually full-time jobs, Grundstrom will need to earn his place, and cement a permanent role, in the lineup moving forward.

Grundstrom is on the second season of a two-year contract extension signed in September 2020 and will be on a one-way deal this season.

By Zach Dooley
283 Comments
Behind the Scenes