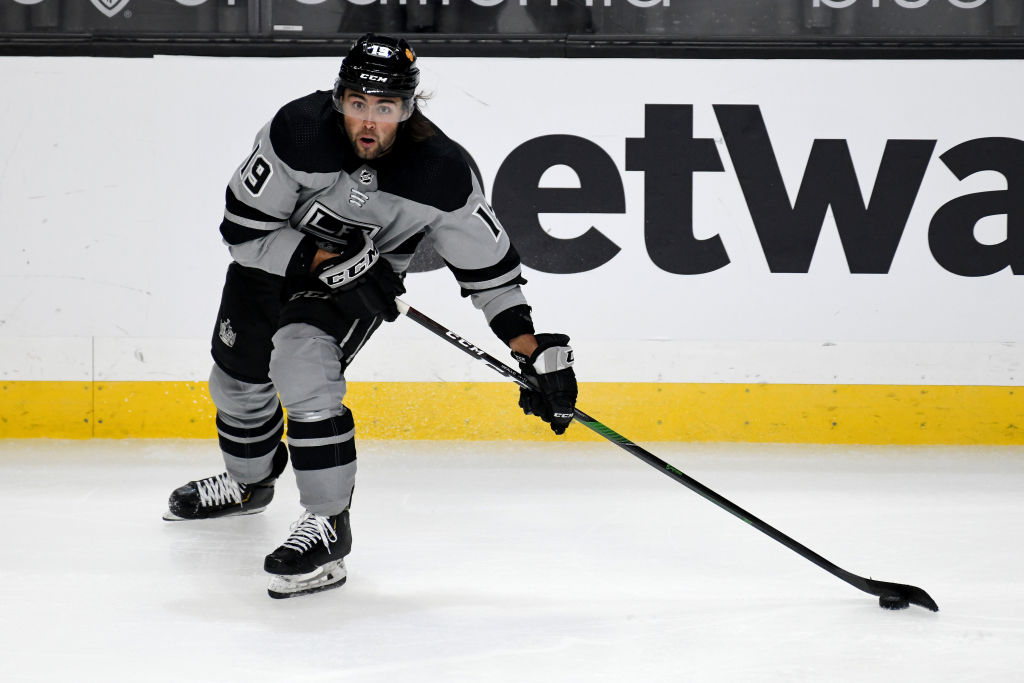 As we head into the holiday weekend, it was only fit to end with an American-born forward.

Winger Alex Iafallo spent the bulk of the season exactly where he’s spent the majority of his NHL career – alongside Anze Kopitar and Dustin Brown on the top forward line for the Kings. Todd McLellan did switch things up a bit as the season progressed, with Iafallo moved around towards the end of the season, but he posted some solid figures at both ends of the ice as he completed his fourth NHL season.

Iafallo has been a sound possession player, pretty much throughout the entirety of his professional career to date. The Western New York native’s production was just about on par with his rates from last season, while he was lauded by Todd McLellan as one of the team’s most consistent players throughout the course of the season.

“He can check, he’s responsible defensively, he understands structure, and on the other end of it, he might not be the most gifted player in any area, but he puts all of his tools together and as a result, he becomes a pretty consistent, trusting player.”

Trending Up – In terms of the general stats, Iafallo ranked third on the Kings in assists, and fourth in goals and points. Looking at strictly 5-on-5 scoring, Iafallo trailed only Kopitar in goals, assists and points. Iafallo was a consistent player throughout the majority of the season, missing just one game due to illness, and outside of a slump towards the end of April, was steady in his offensive totals.

It’s difficult to measure defensive impact, and frequently, players who excel in some of these categories are there simply because of offensive dominance. Lots of puck possession for equals lesser chances against. In Iafallo’s case though, on a team that was not one of the league’s best in terms of controlling the puck, his defensive play was extremely good, as he’s developed a reputation as an effective, two-way winger.

Iafallo also grew as a leader as he continued the transition from a younger player to an important part of the team’s secondary core, and perhaps more, moving forward. Iafallo wore an “A” for the first time in his professional career, taking on the responsibilities at the end of the season. The letter itself isn’t what makes a player a leader, it’s the things that he does that merit the letter. Iafallo was lauded as a “straight shooter” by McLellan, a player who he feels is a good influence on the team’s many younger players, with Iafallo serving as an important presence for that group.

The 27-year-old winger also earned himself a four-year contract extension, signed on deadline day, cementing his role on the Kings as an important part of what they’re trying to build. Over his four years with the organization, Iafallo has proven to be a fit both on the ice, and in the mold of the character that Rob Blake is looking to build. For many reasons, an extension made sense for both sides, and was a great reward for a hard-working individual.

“We’ve been focused on building a group in here and Alex has been a part of that group,” Blake said. “He’s come in and played alongside Kopi on that line and he’s been very effective, very reliable, system-type player that is constantly a real good pro. We want to make sure we are taking care of the good hockey players that are going to be a fit going forward here with us.”

Trending Down – The usual knock on Iafallo is that his raw production doesn’t match that of what people want to consider a “first-line forward”. This season, while he was on track to post his highest points-per-game mark of his NHL career, a late-season slump pushed him slightly under his 2019-20 totals, dropping from .61 points-per-game to .55. Iafallo’s production, when isolated, puts him more on the high end of a second-line player when compared to others around the league.

One area where you might want to see more production, specifically, is on the power play. Iafallo tallied just eight power-play points (4-4-8), though he logged the fourth-most power-play ice time amongst all Kings players. If you watch Iafallo on the power play, and specifically look for the number of times he retrieves the puck in the offensive end to keep sequences alive, you’d be impressed. The more he can turn those dirty plays into production moving forward will be key for the Kings in getting 5-on-4 production.

2021-22 Status – Iafallo will enter the first year of his four-year extension when training camp opens in the fall. The commitment shown by the organization makes Iafallo the forward on the Kings roster with the most term remaining on his deal, with just Drew Doughty locked up longer amongst all players.

The deal for Iafallo was a win for both sides, rewarding a player who has shown he wants to be a part of what the Kings are doing moving forward, while also getting a player who fits in under contract at a more than reasonable rate.

The exact makeup of the forwards heading into next season is unknown at this time, but Iafallo’s presence, in a large role, is one you can likely count on.

*Note – The next article in this series won’t be posted until after the holiday weekend, re-starting up with Carl Grundstrom on July 6.