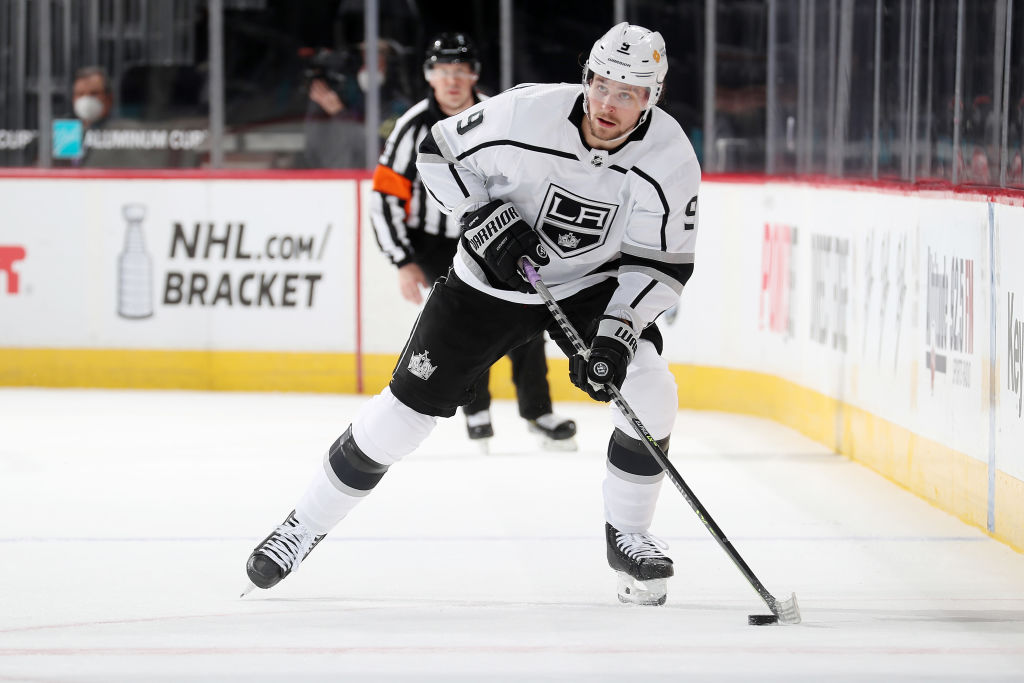 Though the team’s forwards were much less consistently slotted than the defensemen, we’ll start with those who played predominantly on the left, then in the middle and finally on the right. The Kings have eight forwards under contract for next season who spent the entirety of the 2020-21 campaign at the NHL level.

It only makes sense to start with one of the most versatile members of the Kings from this past season though, in Adrian Kempe. Kempe played perhaps the largest variety of roles of any Kings player this season, skating at all three forward positions, on all four lines, at various stages. Kempe’s versatility was frequently lauded by the coaching staff, and his ability to find success in different situations, as well as on special teams, was certainly encouraging.

Kempe was a swiss army knife for the Kings. He played at least 90 minutes of 5-on-5 time with six different forwards, but no more than 200 with any of them. Kempe moved around the lineup as needed for the Kings, typically with circumstances around him dictating the movement.

Kempe was a key player for the Kings on both special teams units, as he continued to improve his all-around game. With solid production and praise from coaches, Kempe had a strong campaign.

Trending Up – Looking strictly at raw production, Kempe has his best season at the NHL level. At .52 points-per-game, Kempe was above the “half point per game” mark for the first time in his NHL career, while his 14 goals from 56 games put him exactly at a .25 goals per game clip. Those totals over 82 games would add up to more than 20 goals and more than 40 points, which are solid numbers from a middle-six player.

Kempe was also a top contributor on special teams. With the power play converting at a high rate in the first half of the season, Kempe excelled on zone entries, as the player primarily responsible from transporting the puck into the offensive zone and retaining possession. Production wise, only Anze Kopitar and Drew Doughty have more power-play points than Kempe, who collected a career-best 14. On the PK, Kempe ranked fourth amongst forwards in total time on ice, and had the best goals conceded rate amongst the regular six penalty-killing forwards.

The versatility that Kempe provide is also an obvious plus. Kempe skated at times on the wing with Kopitar, he skated on the wing with Gabe Vilardi and Quinton Byfield, he centered the fourth line in a few games and played in the middle six with Blake Lizotte. And that’s not all. Kempe was able to effectively fill a variety of roles, often with little time to really settle in. Players like that are important to have.

“Players that have those tools in their toolkit, the ability to play in different positions at different times and still have success, they’re very valuable. Adrian’s become that for us,” McLellan said midseason. “He’s played on the right, (on the) left, played in the middle and he’s played with various linemates. I guess you could consider him on the back end on the power play as well.”

Trending Down – You can look at how frequently he was moved around the lineup a number of different ways. While Kempe’s versatility is undoubtedly positive, he never really cemented a permanent home on any line, or with any particular linemates, which was something he acknowledged was difficult at times.

“Sometimes it’s hard to know what kind of player you’re playing with now, when you adjusted to playing with certain players for a couple of games,” Kempe said. “I think, for me, I would like to see a more consistent mix of lines for the team, but I’m not the coach. Either way, whoever you play with, I just try to do the best I can out there. Building consistency in lines can build a lot more chemistry as well.”

You could point to his 5-on-5 possession numbers from a few different directions as well. Kempe was as consistent as they came in terms of never ranking at the top of the bottom of any particular metric and was exactly 0.6% lower than the team average without him on the ice in shot attempts, scoring chances and high-danger chances. At the same time though, Kempe is an important player for the Kings, and you’d like to see that 0.6 number flipped on the positive side, showing a consistent player on the right side of the team average.

Lastly, while his overall production was the best of his NHL career, Kempe’s 5-on-5 production rate was below that of his 2017-18 and 2018-19 seasons, though some of that can likely come down to puck luck. The Kings shooting percentage with Kempe on the ice was the third lowest amongst team forwards, which indicates you might see an uptick moving forward.

2021-22 Status – Kempe will begin the third season of a three-year contract signed in September 2019 and would become a restricted free agent for the second time in his career at the completion of the 2021-22 season.

Kempe’s progression across his career has led to a productive player at the NHL level and a player who McLellan seems to value. Kempe’s combination of skating ability and size, combined with his puck handling, has turned him into a versatile NHL contributor. With Kopitar and the expectation of at least a couple young centers behind him, it will be interesting to see where Kempe winds up in next season’s lineup, and if he will be able to establish some consistency on a line.

By Zach Dooley
284 Comments
Behind the Scenes