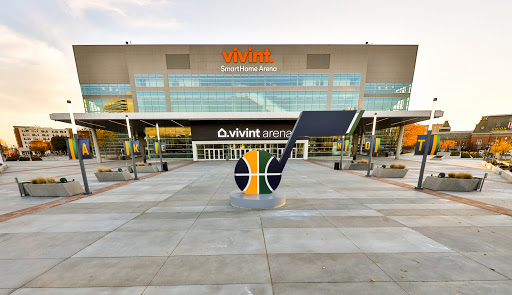 Over 18 years, the LA Kings created a tradition in what was then a hockey-less city of Las Vegas. Frozen Fury was an annual exhibition game, or set of games, played at the MGM Grand Garden Arena in Vegas, typically contested against the Colorado Avalanche, but also featuring other opposition from around the NHL.

Frozen Fury was an event of passion amongst Kings supporters. It was an annual tradition that many looked forward to every year, a trip to commemorate the start of the season with a preseason game that felt like more than what it was, an exhibition.

“I’ve read all the social media comments around everyone’s opinion on this,” Kings COO Kelly Cheeseman said. “I think the reality is that Frozen Fury had a great brand, we recognize that.”

With the arrival of the Vegas Golden Knights to the league in 2017, hosting a “home” game in Vegas was no longer an option for the Kings, though the opportunity to host a destination game during the preseason was still something that appealed to the organization.

Enter in Salt Lake City. The Kings have played an exhibition game at Vivint Arena, home of the NBA’s Utah Jazz, in each of the last two preseasons, hosting the Vancouver Canucks in 2018 and 2019. As the Salt Lake Shootout, those games were branded with alliteration that was not quite at the level of Frozen Fury. Now, with a three-year deal to play against the Golden Knights locked in, Frozen Fury returns.

“Frozen Fury in Vegas is different than it is in Salt Lake, but the point of Frozen Fury is that it was a tradition of Kings fans and hockey fans, coming together in the preseason to celebrate the season starting,” Cheeseman said. “Independent of whether it’s in Vegas or it’s in Utah, it’s about the spirit and fandom of Kings fans coming together and that’s what we really want to build.” 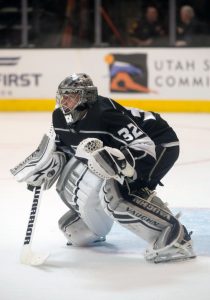 More than 12,000 fans were in the building on September 24, 2018, as the Kings hosted Vancouver in the inaugural event. Another five-figure crowd followed a year later. After all preseason fixtures were cancelled this past season, the Kings return with a new brand and a new opponent, in a familiar venue.

It’s fitting that the Golden Knights will line up against the Kings just over three months from now, considering the past ties of the city to Frozen Fury. The Golden Knights make sense from a proximity standpoint, making LA / Vegas an ideal matchup for the local crew in Salt Lake City. Both teams represent a solid draw, which everyone hopes should create a large crowd for a preseason game, which isn’t a norm in most places.

“It’s a nice rivalry,” Cheeseman said. “I know we’re not at the peak of our moment right now, but we will get there. If we can play a back-to-back, Salt Lake City and Vegas, for a decade straight, I think it’ll build on a nice little rivalry of Kings vs. Vegas. Remember those early Frozen Fury games, when we first started playing Colorado when they had Roy and Sakic, that’s what built – some fans still laugh about the rivalry versus Colorado – but it was pretty nasty then and the preseason game in Vegas was awesome. Preseason is, if it’s timed right, is a whole different level.”

The plan, as Cheeseman mentioned, is to play a back-to-back with the second night in Vegas, also against the Golden Knights. While it won’t be the “home” feel that Kings fans were used to, in preseason games past, the Vegas destination element is still something that is tied to Frozen Fury.

“Success comes with continuity and tradition” was Cheeseman’s answer when asked why hold an extended series in Utah, as opposed to hosting games in a variety of different markets. Tradition, specifically, is something the Kings are trying to create in the preseason. With regards to why the Kings chose Utah as their home of continuity, the answer had several parts to it.

For starters, Utah has a steady supply of Kings fans living there, something that Cheeseman attributed to Salt Lake City formerly being a part of the Kings out of market broadcast territory, groups of people moving from the LA area to Utah, as well as the impact that Trevor Lewis, and Daniel Brickley, have created as Utahn’s to reach the NHL, both playing games for the Kings. While no longer with the organization, Cheeseman did not downplay the impact that Lewis, who brought the Stanley Cup back home with him to Utah, made on converting fans in an NHL-less market into Kings supporters.

There’s also the benefit to creating and building something solid, as opposed to chasing something new every season. The Utah Jazz ownership group was aggressive in getting an NHL exhibition game in Utah, following upgrades and renovations to the arena that concluded in 2017. Shortly following was the Salt Lake Shootout, which has evolved into the rebranded Frozen Fury event. 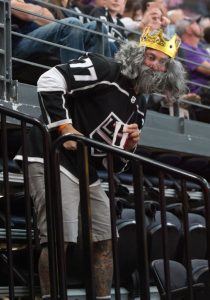 A Kings fan celebrates after a goal during the Salt Lake Shootout on September 24, 2018, at Vivint Smart Home Arena in Salt Lake City, Utah. (Photo by Boyd Ivey/Icon Sportswire via Getty Images)

“They’ve made that commitment and it’s nice to not chase different markets every year too, there’s simplicity to it as well…the Jazz have always activated a lot around this game too,” Cheeseman said. “Their players wearing hockey jerseys, I think we had the Jazz-themed warmup jerseys that were auctioned off for charity in the marketplace last time. Some of those traditions that we see in LA, we’ll have up in Salt Lake as well.”

The Utah connection is important to the Kings as well. The Kings have held youth hockey camps in Park City prior to ever playing a game there, with Cheeseman calling it one of the organization’s most popular camps. He added that the Kings have committed to running clinics in Utah throughout the summer to help grow youth hockey in the area, as well as promote the preseason game to follow.

“[It’s] a marketplace that’s been fun for us for a long time,” he said. “Our involvement around Sundance, Park City with Luc’s celebrity hockey tournament and the tradition of people from Los Angeles going up to Park City, having second homes or visiting Park City is longstanding. It’s a good fit for an out of market game, it’s a fun experience for people to travel to.”

In a way, when the Kings take the ice in the Beehive State, it won’t feel like a new venture. In others though, it will. Frozen Fury carries a lot of weight with Kings fans, ranging from the Insiders in the comment section to the those who were knee-deep in the middle of the gauntlet in Vegas.

While certain things were unique to Frozen Fury, Vegas edition, Cheeseman and the Kings organization are hopeful that the new version of the event will allow Kings fans to create new traditions, new memories and new experiences.

“Whether they’re from Salt Lake City, or they’re from Los Angeles, or they’re up from Mammoth where we have a ton of Kings fans, all of those things coming together to celebrate the start of the year, maybe getting into some healthy arguments with some Vegas fans, that would be fine,” he said. “We’ll never recreate the skinny hallway of the gauntlet at the MGM Garden Arena heading to a hockey arena that wasn’t really a hockey arena, that can’t be recreated, we understand that, but let’s start a new tradition. The group in Salt Lake is really focused on making this a fun experience for the next number of years.”

Frozen Fury will be a full-capacity event and depending on the entire preseason schedule, it could be the first the Kings are a part of since March 2020.

“Yes, it is a full-capacity event,” Cheeseman said. “Utah has been well in front of us when it comes to full capacity events, as is STAPLES Center next year. We’re happy to not be talking about limited capacity events anymore.”

Cheeseman indicated that STAPLES Center will be at full capacity next season as well, a welcomed change for us all to look forward to. 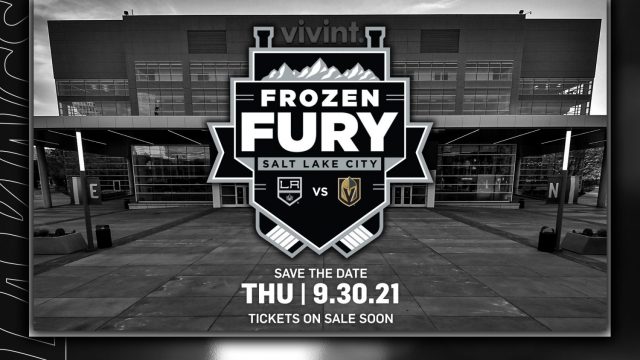