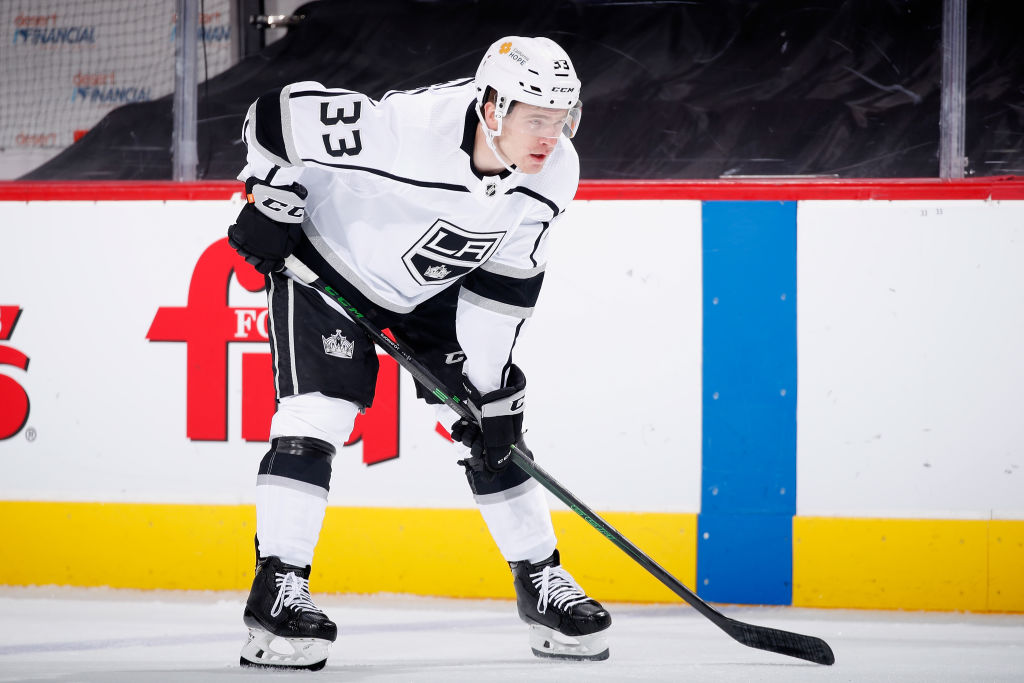 Monday, we took a look back at one rookie defenseman’s first season at the NHL level, and today we dive into another.

When the Kings were at full force on the blueline, their top two slots on the left side were taken up by a pair of first-year blueliners in Mikey Anderson and Tobias Bjornfot. Similar to Anderson, Bjornfot surpassed his season-opening expectations. On opening night, Bjornfot wasn’t a part of the Kings lineup, and didn’t enter in until mid-February. Once he did though, he was there to stay.

Bjornfot’s play impressed those in management to the extent of triggering the first season of his entry-level contract, which the Kings could have chosen to push back another year if Bjornfot played fewer than seven NHL games. His strong performances early, however, earned himself a spot on the second pairing for the majority of the season, joining Anderson as a regular in the lineup.

Similar in some ways to Anderson, Bjornfot’s rookie campaign can’t be judged solely off of his raw production, as a budding, two-way defensemen. We saw some ups and downs, as you’d see with any 19-year-old cutting his teeth as an NHL player. Bjornfot was generally a solid defender, but plays like Nazem Kadri’s goal in Colorado served as learning experiences.

In his season-ending interview, McLellan talked about the role that Bjornfot assumed as a younger player, noting that he not only took on significant minutes, but he was ready to do so. That bodes well as he takes a full year of NHL experience with him into the summer.

In being that player, Bjornfot demonstrated substantial growth from the three games he played at the beginning of last season to where he wound up this season. Kings Head Coach Todd McLellan pointed to strength, quickness and confidence as specific areas of improvement, with Bjornfot swimming comfortably at the NHL level, rather than just treading water.

“I think he’s physically stronger than he was last year at this time, he’s able to read and react a lot quicker, he’s got way more confidence,” McLellan added. “The players believe in him a lot, and he just fits, he looks like he belongs now, whereas maybe in the past, he was just trying to survive.”

Looking strictly at opportunities for, Bjornfot was at or above the team’s average in shot attempts, scoring chances and high-danger chances. While his raw offensive production didn’t necessarily match that, no Kings defenseman had a lower on-ice shooting percentage than Bjornfot, suggesting that you’d have expected to see more goals with him on the ice than actually were scored. Kings Assistant Coach Trent Yawney believes he has some of the tools to become a productive player offensively.

“I think he has some offensive upside too. He’s a pretty good shooter, his shot is a lot better than even I probably gave him credit for. There’s an offensive side to him that I think as he gets more and more confident that we’ll start to see.”

It was also nice to see Bjornfot get more and more comfortable, as a person and as a teammate, as the season progressed. Known as a quiet individual, teammates and coaches began to talk about Bjornfot opening up as the season went on, as he became more relaxed and more comfortable with the group. As a player lauded at a young age for his character and leadership abilities, that’s a good sign to see.

Trending Down – In a similar blueprint to Anderson, you’d like to see continued growth and evolution from Bjornfot in the areas of strength and offense.

There were times when Bjornfot was outmuscled defensively, and times when he took unnecessary minor penalties, looking specifically at a five-game stretch where he had one in each game. Overall, general traits that come with the growth and evolution of most younger defensemen, but areas where continued evolution will be important moving forward.

Looking at chances conceded, unlike the chances for as mentioned above, Bjornfot was below the team average. The good sign was that it didn’t always result in goals against, as no Kings defenseman saw a higher save percentage while he was on the ice than Bjornfot did, the opposite of what we saw with shooting percentage. Bjornfot’s on-ice save percentage was more than two full points above the Kings team average at 5-on-5, meaning we could see a regression to the mean, similar to shooting percentage, just in the opposite direction.

There were no glaring flaws in Bjornfot’s game, but rather areas where you want to see natural progression from season to season, and he continues to grown towards his overall potential.

2021-22 Status – Bjornfot enters the second season of his entry-level contract, his third professional season in North America. 2020-21 was extremely scattered for Bjornfot, who began the season playing in Sweden throughout the fall, as the NHL and AHL waited, before heading to the World Juniors, followed by the Reign and eventually the Kings.

A much more consistent 2021-22 season figures to await, with Bjornfot likely penciled in for a spot on the Kings blueline after a rookie season that left positive impressions. As he continues to grow and develop, the expectation is that Bjornfot will continue on his way towards cementing his status as a Top 4 NHL defenseman, with the experience he continues to gain along the way aiding in that process.