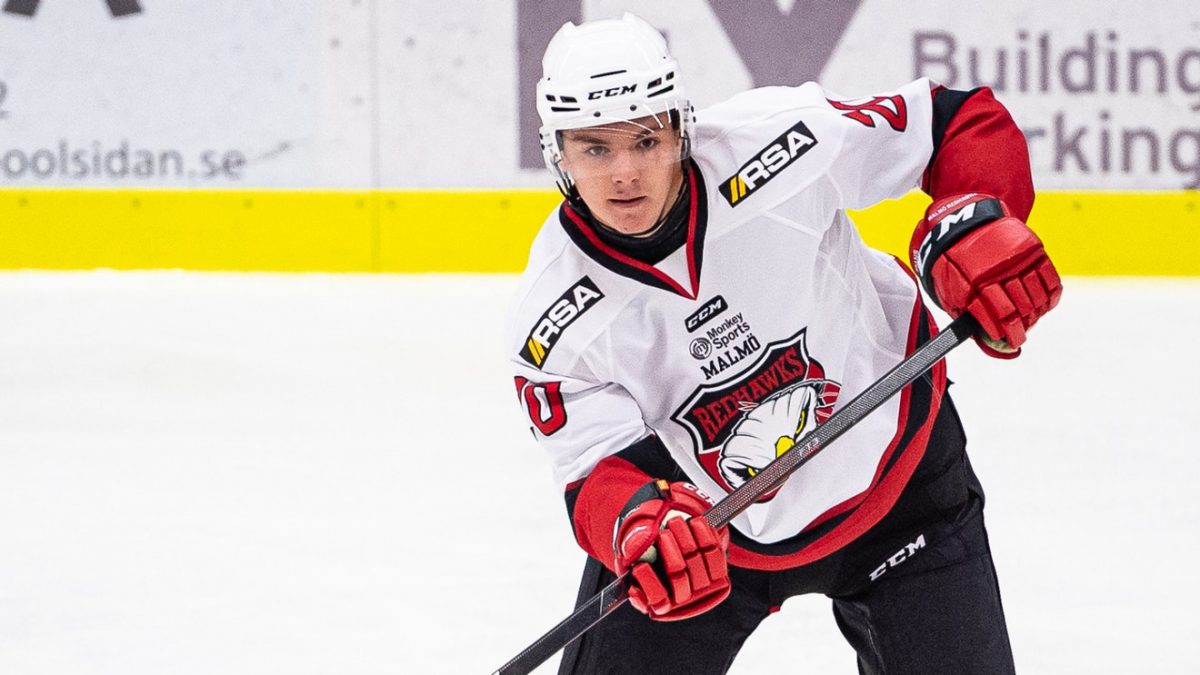 The LA Kings announced this afternoon that they have signed defenseman Helge Grans to a three-year, entry-level contract. The contract carries an average annual value (AAV) of $925,000 at the NHL level.

Grans, a 6-2 defenseman, was selected in the second round of the 2020 NHL Draft back in October and spent the 2020-21 season with the SHL’s Malmo Redhawks in the top professional league in Sweden.

The 19-year-old blueliner tallied 12 points (3-9-12) from 43 games played with Malmo, as the team advanced into the play-in round of the postseason. The 2020-21 season was the first full campaign for Grans at the senior level, after he split the 2019-20 season between the Malmo senior team and the U-20 level. Grans originally made his SHL debut during the 2018-19 season, with five senior games played, as well as two in the Champions Hockey League.

Internationally, Grans represented Sweden at the 2019 Hlinka Gretzky Cup, but was unable to play in the U-18 World Championships, due to the event being cancelled in 2020. He was selected to Team Sweden’s World Juniors training camp this past season, but did not make the final roster. Grans is eligible to play in the World Juniors in 2021, and is, at this point, likely to make that team.

Prior to the 2020 NHL Draft, Grans was lauded for his puck-moving abilities, with many draft analysts lauding his passing abilities. The Athletic’s Corey Pronman noted that Grans makes strong passes at both ends of the ice, while Chris Peters said that Grans makes “good reads and smart, accurate passes.”

In January, the Ljungby, Sweden native signed a contract extension with Malmo, which keeps him as an SHL player with the Redhawks through the end of the 2021-22 season. The NHL/SHL Transfer agreement does not preclude Grans from playing in North America next season, but his contract extension ensures that if he does play in Sweden, he would play with Malmo.

The Kings have previously taken a variety of different development paths with their young, European prospects. Tobias Bjornfot played in North America in his age-18 season, Rasmus Kupari in his age-19 season and Samuel Fagemo in his age-20 season. Defenseman Jacob Moverare recently finished his first campaign in North America during his age-22 season. Every development curve is different, and now having Grans under contract gives the organization, and the player, flexibility to do what’s best for his personal growth and development.

Grans is the second member of the Kings 2020 Draft Class to sign an entry-level contract, following second-overall selection Quinton Byfield.

Mark Yannetti on Helge Grans
He has an excellent sense, in a transitional term, of moving the puck up the ice. He’s got excellent straight-line skating, powerful stride, he really sees the ice well, processes well and sorts it out well. On the offensive blueline, his vision is excellent. I think he has the offensive tools to be a first power-play type player. His defensive game needs a little bit of work, but his competitive nature is there, which is good.

Helge Grans on his game
I see myself as an offensive, two-way defenseman who is playing good with the puck, having a good passing game and can shoot the puck as well….When I get up to speed, I can skate pretty well, but I need to work more on my first strides and being a little bit quicker….I improved my defensive side, more and more, in the SHL, and I felt better after every game. I felt stronger and more comfortable in the SHL.

Malmo General Manager Patrick Sylvegard on Grans (via malmoredhawks.com)
First and foremost, we are happy and proud to have Helge with us. He has the potential to be very good and we see him as a top defender with us over the coming season. Our goal is to help him become as good as we know he can be, so as to develop into a player in the world’s best hockey league in any season.

Good morning, Insiders! Some news for you here on this fine Friday. The NHL, NHLPA and IIHF have come to an

The LA Kings have announced their 28-player roster for the 2021 Rookie Faceoff, set to take place later this month