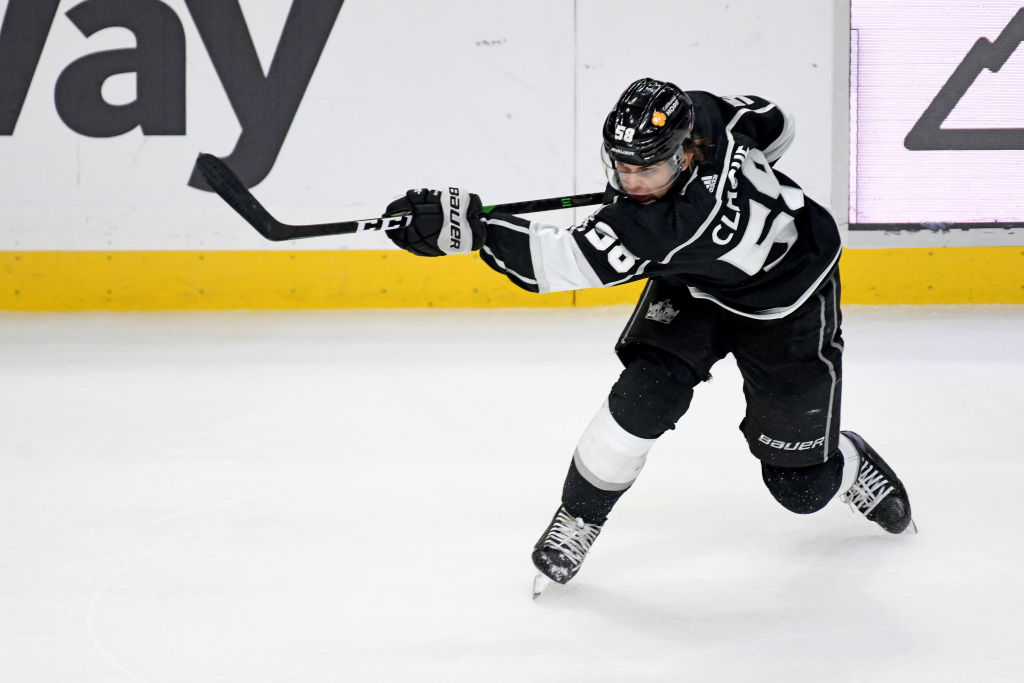 Our second article in the Kings Seasons in Review series takes a look at four players who split their seasons between the NHL and AHL, beyond those who made their NHL debuts. This includes goaltender Troy Grosenick, defensemen Mark Alt and Kale Clague, plus forwards Lias Andersson and Martin Frk.

The first article, which took a look at those who skated in their first career NHL game this season, can be found here.

Also included for each player is an audio evaluation featuring Jesse Cohen and Daryl Evans, a feature that will continue with Cohen joined by different analysts throughout the series.

Mark Alt’s 2020-21 statline at the NHL level consists of a pair of games, skated on the third pairing. Alt was signed in the offseason to likely serve as a veteran presence on the blueline at the AHL level, with the ability to fill in with the Kings. He was and did exactly that. Alt was serviceable as a fill-in with the Kings, but was ultimately passed on the depth chart by Austin Strand, who earned games in the absences of Matt Roy and Sean Walker on the right side.

Although he battled injuries throughout the season in the AHL, Alt was a steady, reliable presence down the stretch. After he was -8 through 11 games, Alt was +6 the rest of the way as Ontario turned a corner in the final two-thirds of the season.

2021-22 Status – Alt is an unrestricted free agent and is free to sign anywhere throughout the league. In each of his three stops, Alt has primarily played in the AHL with an ability to fill in in the NHL, which should continue either with LA or another organization.

There is perhaps not a player who improved his stock more down the stretch than Lias Andersson. Throughout the first three-plus months of the season, Andersson’s name popped up in a roster move seemingly every single day, rotating between the active roster, taxi squad and Ontario Reign roster. With the Kings, Andersson played 11 of 12 games between January 19 and February 16, but just two games between then and April 28. In none of those games did he exceed 13:30 of ice time, and his role fluctuated between the third and fourth lines, and between center and the wing. The possession metrics were ugly when he was initially assigned to the AHL, with the Kings controlling just 38.5 percent of shot attempts with Andersson on the ice over his first 14 games.

In the AHL, Andersson was one of the league’s top players, as he polished his game in preparation for another NHL opportunity. Andersson scored at exactly a point-per-game in his 17 games with the Reign this season, including a league-leading three shorthanded goals.

“He came to a new team, he played some games, he was in and out, he didn’t get to play a lot and we asked him to go to the minors just to get his game polished up and get some game action,” McLellan said of Andersson. “He did that, he was very patient, every day he showed up at the rink and I don’t know how many times he walked by me and said “I’m ready” and he was. When his number was called, he was ready, good for him.”

On April 28, Andersson returned to the Kings. And he never looked back.

The 22-year-old forward dressed in each of the team’s final 10 games, playing the majority of his time on the second line with Alex Iafallo and Gabriel Vilardi. Andersson collected three points (1-3-4), a +2 rating and a CF% of 50.5. Other puck possession metrics favored Andersson as well, with the Kings controlling nearly 53 percent of scoring chances and more than 54 percent of high-danger chances.

Andersson is one of the more interesting players in the organization entering the offseason. His closing sample points to a player with a ton to offer, and his play over the final 10 games was extremely encouraging. That wasn’t the case for the entire season, however, and establishing that consistency moving forward will be key in cementing a role ahead of the potential arrival of several younger players, and potential outside acquisitions.

2021-22 Status – Andersson is a restricted free agent, meaning he and the Kings would need to agree to a contract extension, but he was acquired to be a piece for the long term, not just 2021. The Smogen, Sweden native entered this season in an evaluation mode, and exits it in one as well, but with a strong final impression. His final 10 games were excellent, after an up and down first 13. Which of those two ends he trends more towards will be key to establishing his role and overall potential moving forward.

No player had a more direct split of games between the AHL and NHL than Kale Clague, who logged 18 with the Kings and 23 with the Reign. Clague began the season in the opening-night lineup, following the late additions of Kurtis MacDermid and Sean Walker to the NHL’s COVID protocol list, and skated in 11 of the team’s first 13 games.

Possession metrics were relatively kind to the young defensemen, with the Kings controlling 50.6 percent of shot attempts with Clague on the ice. Scoring chances and high-danger chances were in line with many others on the Kings, meaning less favorable than general attempts, which jives pretty consistently with what you saw from the Kings throughout the season.

In his first real sample at the NHL level, Clague displayed his smooth skating and natural puck-moving ability, and we were able to see some of the strides he’s taken to improve on his defensive limitations, something he has worked so hard on throughout his three years in the organization. We saw a more complete version of Clague this season than last, and he earned another run of games in April with Matt Roy out of the lineup.

“Since he’s come back up, he’s played quite well, both offensively and defensively,” McLellan said of Clague in early-April. “His sense of where he is on the ice and his reads of when to go and when not to go are much better now than they were when he left, so he’s done some real good things down there.”

McLellan discussed a couple of areas of improvement that Clague worked on improving with Ontario. With the Reign, defensive struggles existed, but regardless of individual statistics, his presence, along with that of Austin Strand, helped to solidfy a young and inexperienced Reign group, which saw a ton of fluctuation in terms of personnel throughout the season. The play of others on the Ontario blueline improved with Clague’s arrival, even if his own play wasn’t quite at the level it was in his All-Star campaign a season ago.

Clague is an interesting member of the organization moving forward. In terms of role, he enters the offseason nearly exactly where he began the season, which is not cemented into an NHL job, but seemingly right on the cusp, on the outside looking in. As a player, though, he’s further along than he was 12 months prior. Clague still brings a unique skillset to the Kings pipeline and concluded still just his third professional season, with upside yet to give.

2021-22 Status – Clague is a restricted free agent this offseason and will need to come to terms with the Kings on either a qualifying offer or contract extension over the summer. A big season ahead for the to be 23-year-old blueliner.

Due to no real fault of his own, Martin Frk’s NHL season consisted of approximately two periods with the Kings.

Frk, slated to open the season on a line with Gabriel Vilardi and Adrian Kempe, suffered a groin injury in the team’s Black/White scrimmage in January, which kept him out of the lineup into early-February. After he worked his way back into the lineup, Frk re-aggravated the same injury during his season debut in Vegas, which kept him sidelined into April. At that point in the season, the Czech winger needed to play games and was assigned to the AHL’s Ontario Reign for game action.

Frk went on to be a big part of the Reign’s late-season form, with 12 points from 14 games played, and the Reign winning 8 of the 14 games he skated in. Frk was the Reign’s top offensive player in 2019-20, which earned him a recall to the Kings and eventually a two-year contract extension with the organization last March.

Certainly a challenging year for a player who showed his own the spring prior. Ideally a clean bill of health over the summer will set Frk up for training camp in the fall.

2021-22 Status – Frk has one year remaining on the aforementioned two-year contract extension, and at this time, is one of 13 forwards that played an NHL game this season under contract for next. Frk will be an unrestricted free agent at the end of next season.

On January 14, Troy Grosenick served as Jonathan Quick’s backup on opening night at STAPLES Center. On January 16, Grosenick was claimed on waivers by Edmonton, only to be re-claimed by the Kings on February 6. On March 3, following two cross-border trips, a pair of quarantines and some time on the taxi squad, Grosenick finally made his season debut with the Ontario Reign. On March 10, Grosenick was thrust into NHL action and made 33 saves on 34 shots in a win over Anaheim.

An incredible two months for Grosenick, who went on to play in just six total games this season between the Kings and Reign, spending the majority of his campaign as the organization’s third goaltender on the taxi squad.

Grosenick was signed this offseason to be exactly that – the third goaltender. He came to LA for the possibility of playing NHL games, which he wound up doing. His AHL statistics this season, from four games, typically with little prep, are an outlier, as his career track record shows that of a very solid AHL goaltender. The 31-year-old netminder more than played his role and provided a positive storyline back in March, when he earned his first NHL victory in more than 2,000 days.

2021-22 Status – Similar to Alt, Grosenick is an unrestricted free agent this offseason. Whether in LA or elsewhere, Grosenick figures to be an experienced third goaltender for an organization, adept at playing the role, with a non-taxi squad season in which to do it.

Coming up next, we’ll take a look at the midseason acquisitions, Brendan Lemieux and Christian Wolanin.