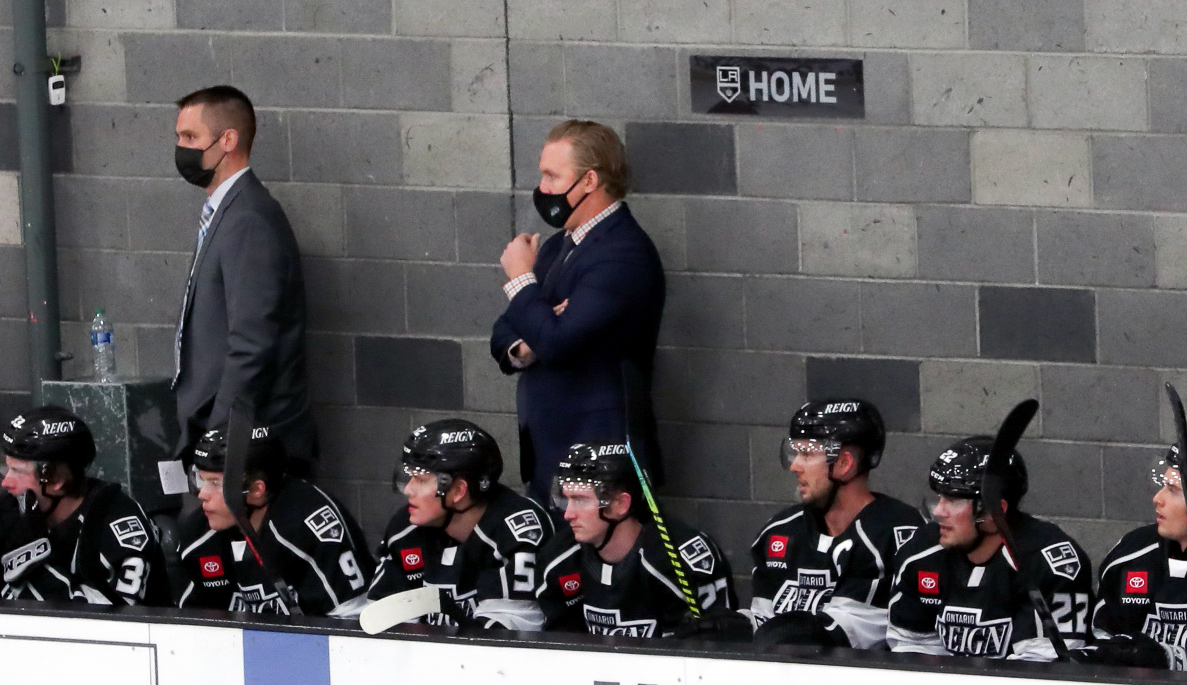 Following the conclusion of the Ontario Reign’s 2021 season, first-year Head Coach of the Reign, John Wroblewski, met with the media yesterday morning for his end of the year exit interview. Full of insight and intricate detail, Wroblewski had plenty to look back on from the abbreviated 40-game regular season, filled with plenty of ups and downs.

Wroblewski’s exit interview can be found below –

While much of the exit interview could’ve been spent going from prospect to prospect and getting Wroblewski’s thoughts on said player, there were many other topics that the bench boss covered. And yes, don’t worry, Wroblewski did give his thoughts on a few of the Reign prospects too.

Growth and Development of the Players

– Two of the prospects that Wroblewski touched on were 2018 second-round pick Akil Thomas and the 2020 second-overall pick, Quinton Byfield. Both having just completed their rookie campaigns, along with 11 other rostered Reign players), Wroblewski talked highly about their growth in different ways.

– Thomas, who played in all 40 games for the Reign this season, recorded 26 points (11-15-26) and played a consistent, intelligent game and won over the trust of the coaching staff according to Wroblewski.

“He’s sort of like an avalanche, he just keeps on rolling. He doesn’t ever make any mistakes or get stopped. He also makes around four elite plays a game and they sometimes go unnoticed. He’s extremely unique, heady, and you get the nights where he racks up the hat tricks and assists and is the game-changer. I was impressed with his rookie year, and a couple more steps he could someday push for a spot with the Kings.”

-As for someone who did make that step to the Kings at the end of the season, Byfield’s growth from the beginning of the season to season’s end was astronomical. Byfield, who is still only 18-years-old, played in 32 games for the Reign and recorded 20 points (8-12-20).

“When we first got [Byfield], he would fly by almost every one of his battles and when he would engage, he would do it with one hand and a try to ‘poke-and-go.’ Credit to Byfield and Craig Johnson on working together to get him more fluent with his timing and the importance of being around the puck…Towards the end of the season, he had that confidence that he could be around the puck, support it and still be able to take off. [Byfield] had a tremendous blend of being able to take the coaching we gave him and relying on his instincts to be effective.”

– One of many themes that Wroblewski harped on all season were the lessons that the rookie-filled Reign roster was learning night-in and night-out. Game-by-game this season, much of the team was seeing or experiencing something new for the first time in the professional hockey ranks. As noted in our previous coverage on the Reign’s season, those messages seemed to stick a bit more following the team’s 1-10-2 start. As Wroblewski and his staff bid the 2020-21 season adieu, one more message and lesson was addressed to the players.

“A message we left with this group is that you either leave here with confidence that you can come in next year and jump in and be a consistent player with whatever they were doing well at the end of the year or you left here with a bit of hunger. Say it’s a guy like Tyler Madden who got his feet wet, but he didn’t get to experience a full season [missing 26 games due to injury]. He’s leaving here hungry wanting more next year.”

– Wroblewski’s message bodes extremely important because of the positive impact that it can have on the team next year, especially for this season’s rookies, who will come back as second-year players. The jump in effectiveness and production from year one to year two in professional hockey has always been a telling sign of what one might have in their young prospects; Wroblewski agrees.

“Some of those jumps can be massive. I’m hopeful we’ll see that. Whether it’s a bit more confidence or these two months of training. I hope our offseason is long enough to make those gains. Our message was crystal clear particularly with some of our younger guys that this has to be a business summer and can’t be a vacation to go home to the lakes. They’ve got to attack the summer. They’re at an age where they can make massive leaps.”

– Along with Wroblewski being a first-year bench boss for the Reign, it was also the first year behind the bench for Assistant Coach Craig Johnson and the first year together for the coaching trio of Wroblewski, Johnson and Chris Hajt. Given the chaos and the unprecedented times that impacted the season, Wroblewski and his staff went through plenty of trial and error. Looking back, he found many positives to take and move forward with.

“We were never out of inspiration for a message, something to work on, something to make better or something that drastically needed improvement. As the year went on, I think we got better at addressing single values and trying to fix one thing at a time. Ultimately, we had the confidence as a group to stick to our mantra.”

– The extremely self-aware coach made it clear this year that while learning lessons to the team were a clear focus this season, there was no one way to go about it. Having spent four years developing players at the NTDP in Ann Arbor, Michigan, Wroblewski understands how to communicate and teach the game to aspiring pros.

“I try to change who I am in my methods almost daily. There are a couple values that you try to stick to but dealing with every individual is different and even the same player throughout time is different. How I handle Aidan Dudas on day 10 of his rookie year is much will be much different than how I handle him on day 10 of his second year. You’ve always got to be ready for the individual to change too. If anything, I’ve got to be more confident to be flexible, to morph and evolve.”

General Manager Richard Seeley also gave a season-ending exit interview, which will be posted here on LAKI at a later date.